X-ray laser experiments show that intense light distorts the structure of a thermoelectric material in a unique way, opening a new avenue for controlling the properties of materials.

Researchers changed the atomic structure of a thermoelectric material in a unique way with pulses of intense laser light - a method with potential to create new materials with dramatic properties that are not seen in nature. They were able to track and measure the atomic movements on a femtosecond time scale with the Linac Coherent Light Source (LCLS) X-ray free-electron laser at SLAC National Accelerator Laboratory.

An illustration shows how the atomic structure of tin selenide, a crystalline material that can convert heat to electricity, changes when exposed to heat or ultrafast laser light. The structure in the middle is at room temperature. Heating (left) moves the top and bottom atoms a little further left, from this point of view, and subtly shifts some of the other atoms. Scientists thought exposing the material to ultrafast laser light would do much the same thing; instead its atoms shifted in new ways (right). SLAC’s X-ray free-electron laser, LCLS, allowed researchers to see these atomic movements and structural distortions for the first time, opening a new avenue to tailoring materials with light. 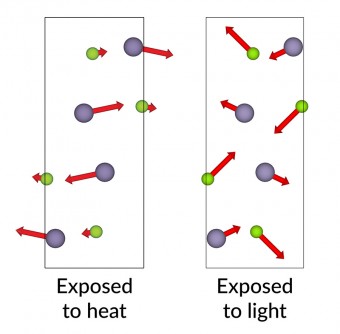 This illustration of data from experiments with SLAC’s X-ray free-electron laser shows how the atoms of a thermoelectric material called tin selenide moved (red arrows) from their room-temperature positions when exposed to ultrafast laser light. Purple circles represent selenium atoms and green circles are tin atoms. Scientists had thought heat and light would have the same effect, so this result was a surprise. The study demonstrates a new avenue for shaping the structures and related properties of materials with light.

Newswise — Thermoelectric materials convert heat to electricity and vice versa, and their atomic structures are closely related to how well they perform.

Now researchers have discovered how to change the atomic structure of a highly efficient thermoelectric material, tin selenide, with intense pulses of laser light. This result opens a new way to improve thermoelectrics and a host of other materials by controlling their structure, creating materials with dramatic new properties that may not exist in nature.

“For this class of materials that’s extremely important, because their functional properties are associated with their structure,” said Yijing Huang, a Stanford University graduate student who played an important role in the experiments at the Department of Energy’s SLAC National Accelerator Laboratory. “By changing the nature of the light you put in, you can tailor the nature of the material you create.”

The experiments took place at SLAC’s X-ray free-electron laser, the Linac Coherent Light Source (LCLS). The results were reported today in Physical Review X and will be highlighted in a special collection devoted to ultrafast science.

Because thermoelectrics convert waste heat to electricity, they’re considered a form of green energy. Thermoelectric generators provided electricity for the Apollo moon landing project, and researchers have been pursuing ways to use them to convert human body heat into electricity for charging gadgets, among other things. Run in reverse, they create a heat gradient that can be used to chill wine in refrigerators with no moving parts.

Tin selenide is considered one of the most promising thermoelectric materials that are grown as individual crystals, which are relatively cheap and easy to manufacture. Unlike many other thermoelectric materials, tin selenide is lead-free, Huang said, and it’s a much more efficient heat converter. Since it consists of regular cube-like crystals, similar to those of rock salt, it’s also relatively easy to make and tinker with.

To explore how those crystals respond to light, the team hit tin selenide with intense pulses of near-infrared laser light to change its structure. The light excited electrons in the sample’s atoms and shifted the positions of some of those atoms, distorting their arrangement.

Then the researchers tracked and measured those atomic movements and the resulting changes in the crystals’ structure with pulses of X-ray laser light from LCLS, which are fast enough to capture changes that happen in just millionths of a billionths of a second.

“You need the ultrafast pulses and atomic resolution that LCLS gives us to reconstruct where the atoms are moving,” said study co-author David Reis, a professor at SLAC and Stanford and director of the Stanford PULSE Institute. “Without that we would have gotten the story wrong.”

This result was quite unexpected, and when Huang told the rest of the team what she had seen in the experiments, they had a hard time believing her.

One tried-and-true way of changing the atomic structure of tin selenide is to apply heat, which changes the material in a predictable way and actually makes this particular material perform better. The conventional wisdom was that applying laser light would produce much the same result as heating.

“That’s what we initially thought would happen,” said SLAC staff scientist Mariano Trigo, an investigator with the Stanford Institute for Materials and Energy Sciences (SIMES) at SLAC.

“But after almost two years of discussion, Yijing finally convinced the rest of the team that no, we were driving the material towards an entirely different structure. I think this result goes against most people'd intuition about what happens when you excite electrons to higher energy levels.”

Theoretical calculations by Shan Yang, a graduate student at Duke University, confirmed that this interpretation of the experimental data was the right one.

“This material and its class are certainly very interesting, because it’s a system where small changes could lead to very different results,” Reis said. “But the ability to make entirely new structures with light – structures we don’t know how to make any other way – is presumably more universal than that.”

One area where it might be useful, he added, is in the decades-old quest to make superconductors – materials that conduct electricity with no loss – that operate at close to room temperature.