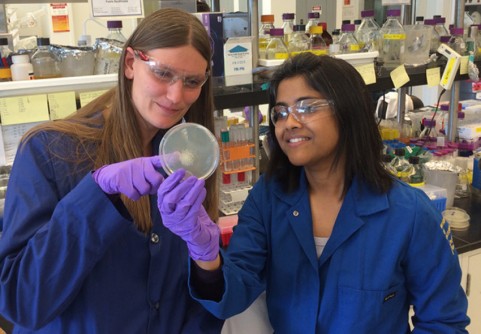 Researchers in a microbiology lab at the Joint BioEnergy Institute are working to streamline the biofuels production process.

Researchers isolated an Escherichia coli mutant that tolerates a liquid salt used to break apart plant biomass into sugary polymers. Because the salt solvent, known as ionic liquid (IL), interferes with the later stages of biofuels production, it traditionally must be removed before proceeding, a process that requires time and money. To avoid the IL removal step, the researchers genetically engineered the E. coli strain to excrete an IL-tolerant cellulase and used the resulting sugars to synthesize d-limonene, a jet fuel precursor.

IL-tolerant bacteria enable a “one-pot” method for producing advanced biofuels from a slurry of pretreated plant material, helping to streamline the production process, which is critical to making biofuels a viable competitor with fossil fuels.

Biological production of chemicals and fuels using microbial transformation of sustainable carbon sources, such as pretreated and saccharified plant biomass, is a multistep process. Each of the steps -- deconstruction of the cellulose, hemicellulose, and lignin that are bound together in the plant cell wall; addition of enzymes to release sugars; and conversion into the desired biofuel -- is done in separate pots. Significant effort has gone into developing efficient solutions to these discrete steps, but few studies report the consolidation of the multistep workflow into a single pot reactor system. Researchers at the U.S. Department of Energy’s (DOE) Joint BioEnergy Institute (JBEI) demonstrate a one-pot biofuel production process that uses an IL (1-ethyl-3-methylimidazolium acetate) for pretreating switchgrass biomass. This IL is highly effective in deconstructing lignocellulose, but leaves behind a residue that is toxic to standard cellulase and the microbial production host. JBEI scientists established that an amino acid mutation in the gene rcdA leads to an E. coli strain that is highly tolerant to ILs. To develop a strain for a one-pot process, they engineered this IL-tolerant strain to express a d-limonene production pathway. The JBEI researchers also screened previously reported IL-tolerant cellulases to select one that would function with the range of E. coli cultivation conditions and expressed it in the IL-tolerant E. coli strain to secrete this IL-tolerant cellulase. The final strain was found to digest pretreated biomass and use the liberated sugars to produce the jet fuel candidate precursor d-limonene in a one-pot process.

This work was part of the Joint BioEnergy Institute supported by the U.S. Department of Energy, Office of Science, Office of Biological and Environmental Research through contract DE-AC02-05CH11231.