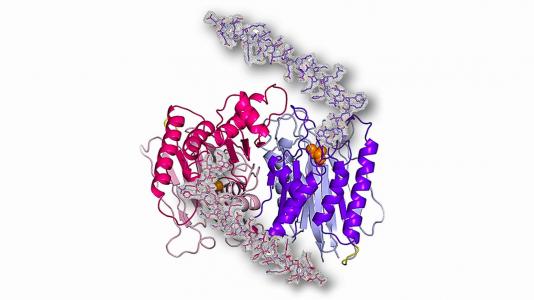 3D model of Taspase1, illustrating the two halves of the active enzyme.

Newswise — Chances are, every one of us has been affected by cancer in one way or another. Unlike some other deadly diseases, cancer can take many forms inside the human body, so learning more about a single enzyme linked to many types of this disease could lead to more effective treatments.

Researchers using the powerful X-ray beams generated at the Advanced Photon Source (APS), a U.S. Department of Energy (DOE) Office of Science User Facility at DOE’s Argonne National Laboratory, have determined the structure of just such an enzyme: Taspase1, which plays an integral role in the production of cancer cells in humans.

Taspase1 instigates the growth and spread of cancer cells in multiple forms of the disease, from childhood leukemia to colon cancer, breast cancer and glioblastoma, which is an aggressive form of brain or spinal cord cancer. With this new information about the structure of Taspase1 come insights into how the enzyme may be a target for future cancer treatments.

“The importance of this region of Taspase1 makes it a prime target for designing inhibitors for anti-cancer therapy.” — Jose M. Martin-Garcia, Rocasolano Institute of Physical Chemistry

The research team, led by current and former Arizona State University scientists, performed this work at the National Institute of General Medical Sciences and National Cancer Institute Structural Biology Facility (GM/CA) at the APS. The resulting paper was published in Structure.

“We have reported the importance of a previously unobserved fragment of Taspase1 which can be used as an attractive target to inhibit its function,” said lead researcher Jose M. Martin-Garcia, currently of the Rocasolano Institute of Physical Chemistry in Madrid, Spain. At the time of this research, Martin-Garcia worked in the laboratory of Petra Fromme, professor at Arizona State and a co-author on the paper.

Taspase1 is a type of enzyme that is initially created in an inactive proenzyme form, and then sliced into parts to generate its active form under the right circumstances.

“This general type of activation takes place in other biological functions, such as in digestion and in blood clotting,” explained Michael Becker, a protein crystallographer in the X-ray Sciences Division at Argonne.

For Taspase1, this slicing or cleaving process results in two fragments. Prior to this research, only portions of the structure of Taspase1 and these fragments had been determined. That is, until Martin-Garcia’s team figured out that they could modify the enzyme slightly to join these fragments, creating a loop that allowed for the whole functional molecule to be crystallized.

The project was not without challenges, however, as Robert Fischetti, life science advisor to the APS director and group leader at the Advanced Photon Source, explained. Fischetti led the design, construction and operation of the suite of beamlines, funded by the National Institutes of Health (NIH), that were used for this research into the structure of Taspase1.

“Determining the structures of these crystals can be quite challenging,” Fischetti said. “The capabilities we have developed at GM/CA made it possible to collect data of sufficient quality for this research.”

The results were illuminating. The research team discovered that one region of Taspase1 forms a long spiral-shaped structure that is vital for its functioning.

“The crystal structure reported in our article is the first to illustrate Taspase1 in its functionally active state, and highlights the crucial importance of this spiral-shaped fragment,” said Martin-Garcia. “The importance of this region of Taspase1 makes it a prime target for designing inhibitors for anti-cancer therapy.”

Martin-Garcia’s research and the insights into Taspase1 gleaned through Argonne’s APS will assist scientists designing new treatments directed at Taspase1’s unique structural feature in the fight against cancer.