A Step Towards New, Faster-Charging, and Safer Batteries

First prototypes of aluminum-ion batteries charge quickly and have the potential for long lifetimes, low cost, and safe operation. 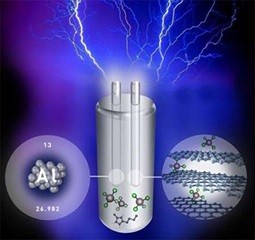 Aluminum-ion batteries could rapidly charge – in less than one minute. One electrode is aluminum foil, while the other is composed of sheets (or a foam) of carbon atoms called graphite. A nonflammable liquid connects the two electrodes.

Researchers found a simple solution to the limited durability in aluminum-ion batteries – an electrode composed of graphite, which is made of sheets or a foam of carbon atoms. In this research, the internal gaps in the foam allowed faster motion of the ions inside the negative electrode that enhance the rate of charging. Also, the electrodes are connected by a safe salt that is liquid at room temperature, rather than a flammable liquid as in conventional lithium-ion batteries.

This research provides a new approach to enable fast-charging, bendable, and durable aluminum-ion batteries and could lead to more affordable, safer batteries. Promising applications include electronics that are bendable and charge in less than one minute as well as grid-scale batteries that demand materials deliver power at the rated levels after being repeatedly charged and discharged.

Grid-scale energy storage to manage our electricity supply would benefit from batteries that can withstand repeated cycling of discharging and charging. Current lithium-ion batteries have lifetimes of only 1,000-3,000 cycles. Now a team of researchers from Stanford University, Taiwan, and China have made a research prototype of an inexpensive, safe aluminum-ion battery that can withstand 7,500 cycles. In the aluminum-ion battery, one electrode is made from affordable aluminum, and the other is composed of carbon in the form of graphite. A safe salt that is a liquid at room temperature (called an ionic salt) connects the two electrodes. Previous electrodes in aluminum batteries significantly degraded following charge-discharge cycling. The long-lasting performance of this new battery is a result of the stability of the new graphite electrode. Also, this aluminum battery is safer because the ionic salt is not flammable like the liquid used in conventional lithium-ion batteries. Impressively, this aluminum battery prototype did not release large amounts of energy uncontrollably when a researcher drilled a hole through it. Based on a “pouch cell” research prototype, the aluminum battery demonstrated sufficient stored energy for common applications such as charging a cellphone and lighting.