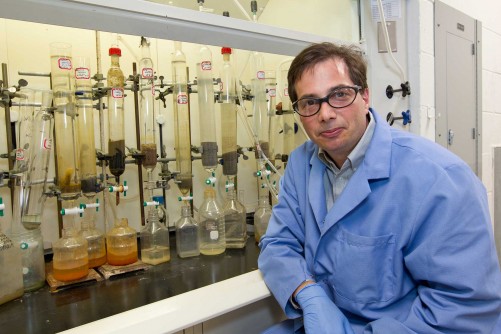 Temple University Chemistry Professor Daniel Strongin is developing a technology to treat abandoned mine waters that could be used in the hydraulic fracturing process to extract natural gas from Pennsylvania’s Marcellus Shale formation.

Newswise — A technology being developed by a Temple University researcher as a solution to Pennsylvania's historic problem with acid mine drainage could also have applications for the state's newest environmental challenge: hydraulic fracturing of Marcellus Shale.

Rock left behind in abandoned mines after coal is extracted contains sulfur impurities that decompose and form sulfuric acid when exposed to air, water and microbes. When water fills a mine’s underground tunnels, sulfuric acid can leach off the walls and get into nearby groundwater, according to Temple University Chemistry Professor Daniel Strongin.

While chemicals such as lime are often used to neutralize acidic runoff, they do not eliminate the root cause, said Strongin. So his lab is developing a technology that uses a specific class of lipid molecules that bind to the metal sulfide, forming a hydrophobic layer that keeps water, oxygen and bacteria from causing it to decompose.

Strongin, who has been working on developing this lipid-based technology for the past eight years, said that approximately 2,400 miles of waterways in Pennsylvania are affected by the contaminated water from the abandoned mines, which is typically acidic and contains large amounts of heavy metals that are deadly to aquatic species.

“Pennsylvania spends roughly $19 million a year to address this issue, largely due to the vast number of abandoned mining areas,” he said. “I’ve read that it’s estimated that it would cost $50 billion to fix the entire problem.”

Strongin now believes that mitigating acid drainage using lipid technology could enable the mine waters to be used in the process of extracting natural gas from the Marcellus Shale formation. During hydraulic fracking, highly pressurized water is pumped into the earth to break or fracture the shale and extract the gas.

“The process requires a tremendous amount of water; essentially, in a given well you need 2-5 million gallons to fracture the rock and release the natural gas,” he said. “As you might expect, people don't want to waste fresh water on that process.”

Strongin said a panel commissioned by the governor of Pennsylvania has recently recommended using water from abandoned mining areas for hydro-fracking the Marcellus Shale.

“It is my belief that our lipid technology could be used to stop acid mine drainage, or the root cause of acid mine drainage, in such a way that the waters emanating from these abandoned mining areas would be more usable in the hydro-fracking process,” he said.

Strongin said there is a cost incentive to remediate abandoned mining areas — which are often in close proximity to the drilling areas — and the contaminated water emanating from those mines for use in the natural gas drilling.

“It cuts down on the costs to transport water to the wells, and you’re not using fresh water resources for the drilling.”

In addition to cleaning the acid mine drainage for use in drilling, Strongin also believes the lipid technology may be useful for cleaning the flow-back water that is a result of the hydro-fracking.

“A lot of the same chemistry that these lipids carry out on the acid mine drainage may be applicable to these contaminated flow-back waters, which carry a lot of dissolved solids and particulate matter,” he said.

Initially funded by the U.S. Department of Energy, Strongin’s research is currently being supported by the Nanotechnology Institute.