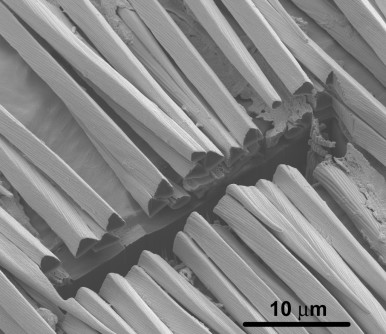 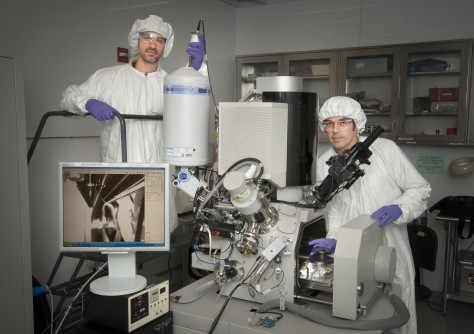 Matthew Sfeir (left) and Fernando Camino of the Center for Functional Nanomaterials use tools like this dual-beam system to investigate nanoscale materials.

Newswise — The tiny hairs of Saharan silver ants possess crucial adaptive features that allow the ants to regulate their body temperatures and survive the scorching hot conditions of their desert habitat. According to a new research paper published in the journal Science, the unique triangular shape and internal structure of the hairs play a key role in maintaining the ant’s average internal temperature below the critical thermal maximum of 53.6 degrees Celsius (128.48 degrees Fahrenheit) most of the time despite midday Saharan temperatures that can reach up to 70°C (158°F).

The paper, published by Columbia Engineering researchers and collaborators—including researchers from the U.S. Department of Energy’s (DOE) Brookhaven National Laboratory—describes how the nanoscale structure of the hairs helps increase the reflectivity of the ant’s body in both visible and near-infrared wavelengths, allowing the insects to deflect solar radiation their bodies would otherwise absorb. The hairs also enhance emissivity in the mid-infrared spectrum, allowing heat to dissipate efficiently from the hot body of the ants to the cool, clear sky. A press release issued by Columbia Engineering has more on the researchers’ findings {http://www.bnl.gov/newsroom/news.php?a=11737].

To study how the hairs allow the creatures to control electromagnetic waves in this manner, the Columbia Engineering research team led by Nanfang Yu needed to see inside these nanoscale structures and understand their functions. They turned to the resources and expertise available at Brookhaven’s Center for Functional Nanomaterials (CFN, http://www.bnl.gov/cfn/), a DOE Office of Science User Facility on nearby Long Island.

“My contribution was to train Shi to use this tool and give him the ability to play with the parameters until we could succeed in characterizing the structure of this hair,” Camino said.

In a typical experiment involving biological material such as nanoscale hairs, it would usually be sufficient to use an electron microscope to create an image of the surface of the specimen. This research, however, required Yu’s group to look inside the ant hairs and produce a cross-section of the structure’s interior. The relatively weak beam of electrons from a standard electron microscope would not be able to penetrate the surface of the sample.

The CFN’s dual beam system solves the problem by combining the imaging of an electron microscope with a much more powerful beam of gallium ions. With 31 protons and 38 neutrons, each gallium ion is about 125,000 times more massive than an electron, and massive enough to create dents in the nanoscale structure – like throwing a stone against a wall. The researchers used these powerful beams to drill precise cuts into the hairs, revealing the crucial information hidden beneath the surface. Indeed, this particular application, in which the system was used to investigate a biological problem, was new for the team at CFN.

“Conventionally, this tool is used to produce cross-sections of microelectronic circuits,” said Camino. “The focused ion beam is like an etching tool. You can think of it like a milling tool in a machine shop, but at the nanoscale. It can remove material at specific places because you can see these locations with the SEM. So locally you remove material and you look at the under layers, because the cuts give you access to the cross section of whatever you want to look at.”

The ant hair research challenged the CFN team to come up with novel solutions to investigate the internal structures without damaging the more delicate biological samples.

“These hairs are very soft compared to, say, semiconductors or crystalline materials. And there’s a lot of local heat that can damage biological samples. So the parameters have to be carefully tuned not to do much damage to it,” he said. “We had to adapt our technique to find the right conditions.”

Another challenge lay in dealing with the so-called charging effect. When the dual beam system is trained on a non-conducting material, electrons can build up at the point where the beams hit the specimen, distorting the resulting image. The team at CFN was able to solve this problem by placing thin layers of gold over the biological material, making the sample just conductive enough to avoid the charging effect.

While Camino’s team focused on helping Yu’s group investigate the structure of the ant hairs, Matthew Sfeir’s work with high-brightness Fourier transform optical spectroscopy helped to reveal how the reflectivity of the hairs helped Saharan silver ants regulate temperature. Sfeir’s spectrometer revealed precisely how much those biological structures reflect light across multiple wavelengths, including both visible and near-infrared light.

“It’s a multiplexed measurement,” Sfeir said, explaining his team’s spectrometer. “Instead of tuning through this wavelength and this wavelength, that wavelength, you do them all in one swoop to get all the spectral information in one shot. It gives you very fast measurements and very good resolution spectrally. Then we optimize it for very small samples. It’s a rather unique capability of CFN.”

Sfeir’s spectroscopy work draws on knowledge gained from his work at another key Brookhaven facility: the original National Synchrotron Light Source, where he did much of his postdoc work. His experience was particularly useful in analyzing the reflectivity of the biological structures across many different wavelengths of the electromagnetic spectrum.

“This technique was developed from my experience working with the infrared synchrotron beamlines,” said Sfeir. “Synchrotron beamlines are optimized for exactly this kind of thing. I thought, ‘Hey, wouldn’t it be great if we could develop a similar measurement for the type of solar devices we make at CFN?’ So we built a bench-top version to use here.”

It’s that ability to take knowledge from one domain and apply it elsewhere—often in unexpected ways—that allows outside users to come to Brookhaven with novel research questions, work with the experts at the CFN to figure out just how to tackle those questions, and leave with the sought-after answers.

“At CFN, our purpose is to bring users to the point where they can do their own research, become independent,” Camino said. “That’s our philosophy: We bring the tools and the knowledge that the users need, so they can continue to work independently.”

Operations at the CFN are supported by the DOE Office of Science (Office of Basic Energy Sciences). 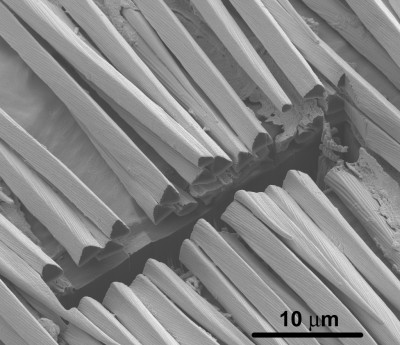 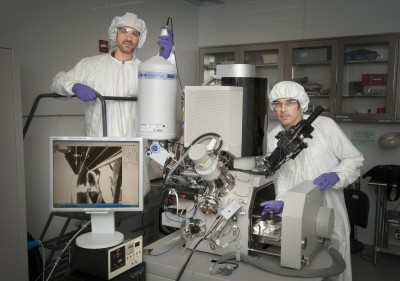 Caption: Matthew Sfeir (left) and Fernando Camino of the Center for Functional Nanomaterials use tools like this dual-beam system to investigate nanoscale materials.