Brookhaven Lab supports the 7th African School of Physics, to be held in Gqeberha, South Africa, this fall 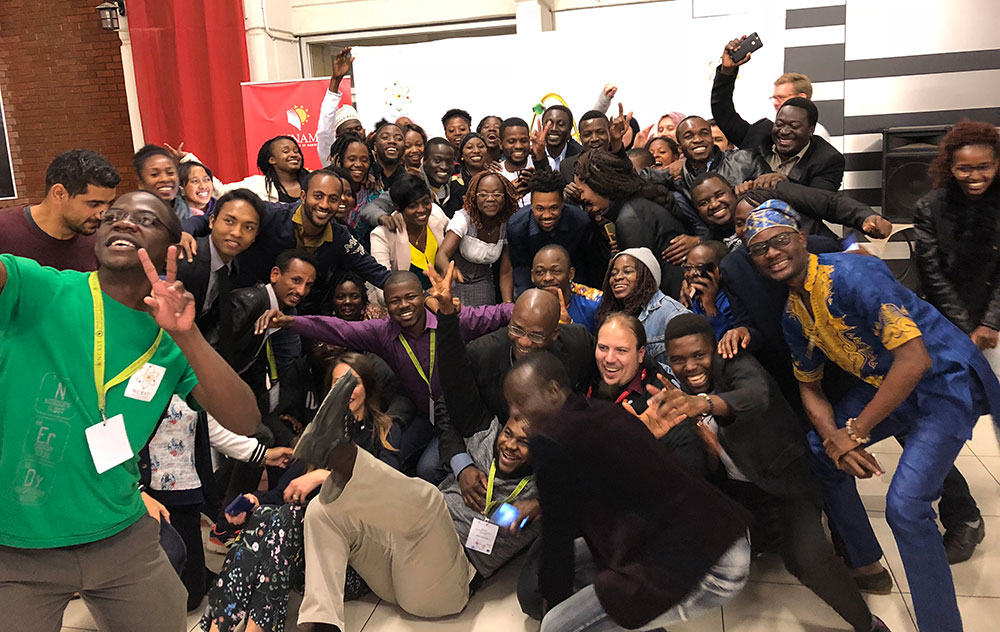 Participants in the 2018 African School of Physics, which took place in Namibia.

Newswise — The 7th African School of Fundamental Physics and Applications (ASP) will be held in-person at Nelson Mandela University in Gqeberha, South Africa, from November 28 to December 9, 2022. Teams of leading physicists from U.S. Department of Energy (DOE) national laboratories and universities and other institutions across the U.S., Europe, Asia, and Africa will introduce more than 70 African graduate students to physics theories, experiments, and technologies.

Participants will learn from the experts and explore the role physics plays in a variety of careers and applications—from space exploration, to medicine, materials science, and elementary particle physics experiments. Attendees will also interact with educators and policymakers with the goal of broadening interest in science throughout the African continent.

“The primary purpose is to encourage African students to pursue careers in physics by providing them with one-on-one mentoring,” said Kétévi Assamagan, a physicist at DOE’s Brookhaven National Laboratory and member of the ASP organizing committee.

The two- or three-week “school” program is held every two years and has rotated through South Africa, Ghana, Senegal, Rwanda, Namibia, and Morocco (virtually) before landing back in South Africa this year. Students are selected competitively by an international committee of physicists, with attention to funding agency requirements, female-to-male ratio, geographical balance across Africa, and promotion of candidates from the “Least Developed Countries” in Africa, as defined by the United Nations, Assamagan said.

But the program, he noted, has grown to serve in many other ways.

“It is a collection of carefully designed, continuous activities to support physics education and research in Africa,” he said.

For example, since 2016, the organizing board has run development programs for African educators (during one week) and outreach programs directed at African high school students (during another week) concurrent with the graduate student program. The host nation can select up to 70 teachers to participate, and outreach to high schools within the vicinity of the ASP venue typically reaches 1000-2000 students in grades 10-12. These efforts are supported by the host country government funding agencies.

ASP also maintains a network of alumni and mentors to connect participants with extended opportunities long after their initial participation in the instructional and interactive school.

“Many African students are interested in studying a variety of fields in physics but may not have access to opportunities for specialized learning,” said Assamagan. “The African School of Physics provides African students with these opportunities and a network to advance their careers. Through this program, we hope to inspire young physicists to continue working in their respective fields.”

“Many participants go on to give back to their communities in Africa and become collaborators for international projects—including research projects at Brookhaven National Laboratory and the other national labs,” Assamagan added.

Dividends for society and science

Alan Stone, a physicist and a program manager in the DOE Office of Science, was impressed when he first learned about the program in 2018. “They’ve managed to come up with a program that is meeting the needs of these communities in quite a different way,” he said, “by bringing the experts to the students.”

The program had been operating on a shoestring budget, with contributions from Brookhaven Lab and a range of international partners. Stone worked to find additional funding from the DOE Office of High Energy Physics to “remove obstacles” and help support U.S.-based instructors and internships.

“My interest is in supporting the instructors so the program organizers can spend more of their money on the students. And I think it would be very valuable if we send some American students to also participate, because they will learn too.”

“But it’s equally important,” he noted, “to not just leave [the participants] after two or three weeks, but select some of them to come and do a three- or six-month internship, where they can get hands-on experience at a National Lab.”

The goal, he said, is not to “poach” African students to come work in the U.S., though some may end up doing that, but rather to provide opportunities and access that pay long-term dividends for science.

“Getting these students interested in something that they can then deploy either in the U.S. or in their home nations—to create jobs and create more interest—that's the domino effect that we're really interested in,” he said.

Support that increases participation in basic science around the globe expands the pool of people to draw from to address a wide range of scientific and technological challenges, both in our nation and abroad, he noted.

DOE’s Stone noted how the program and its educational efforts have a multiplier effect.

“It's not just teaching the students—they're also teaching the teachers. And each teacher is going to reach 30 students or more,” he said.

“We now have over 500 alumni,” Assamagan said. “Many have continued their studies to earn PhDs and begin careers in academia, industry, education, and medicine.”

Alumni leverage their technical knowledge to begin work in their home countries and abroad. Some have even landed at Brookhaven Lab for hands-on experience.

Brookhaven Lab’s PHENIX collaboration at the Relativistic Heavy Ion Collider (RHIC)—a DOE Office of Science user facility for nuclear physics research—was the destination for 2010 ASP alum Bernard Mulilo, who was a graduate student with the RIKEN laboratory in Japan at the time. Mulilo spent one month at Brookhaven Lab, completed his Ph.D. thesis on research at PHENIX, and is now a full-time lecturer and researcher at the University of Zambia, where he is developing a heavy ion physics program.

“We hope to see him back at Brookhaven Lab, perhaps for the new sPHENIX experiment at RHIC, or for the future Electron-Ion Collider (EIC),” Assamagan said.

The ASP also introduced current Brookhaven particle physicist Diallo Boye to Brookhaven Lab as an undergraduate student in 2012. He joined the Lab as a postdoc in 2020 after a series of internships and appointments at the Large Hadron Collider (LHC), located at Europe’s CERN laboratory.

“I am very proud of everything our alumni have achieved and continue to achieve,” said Assamagan. “They bring a lot of innovative ideas to make real changes in their communities and within their respective fields.”

Instructors also take great pride in their roles in the program. Patrick Skubic and Horst Severini, both high-energy physicists at the University of Oklahoma (OU) and members of the ATLAS Collaboration at the Large Hadron Collider, have been part of ASP since 2012. They started supporting the distributed computing effort in Ghana in 2012 and have served as teachers and supported ASP computing tutorials ever since.

“The computing tutorials are generally very well received by the students, and consistently get some of the highest ratings in the school,” Skubic said.

Severini added, “The students enjoy learning how to get started running physics jobs in a distributed computing environment, and how to apply that knowledge to their own school and research work.”

As a representative in charge of the ASP computing support in general, Severini has conducted site visits since 2014 to ensure that the computing and network infrastructure at the school venue is able to support all computing tutorials and exercises during the program.

DOE’s Stone noted that some of the DOE funding has helped bring in larger computer screens so that students, who might otherwise only have access to a cell phone, can interact with algorithms and graphic data.

Logistical challenges extend beyond the realm of technology. Organizers had planned for the 6th edition of the program to be held in-person during the summer of 2020, but the COVID-19 pandemic intervened. That program was eventually rescheduled to an all-virtual format in 2021.

As this year’s program gears up for a fully in-person experience, the organizing committee will continue to monitor COVID-19 conditions around the venue to ensure safety for all attendees.

“We look forward to hosting our students and educators in-person again this year,” said Assamagan. “We hope to re-energize the networking and discussions between students, scientists, and policymakers that help broaden Africans’ interest in physics.”

As Christine Darve, an engineering scientist at the European Spallation Source and ASP co-founder, lecturer, and member of the program’s international organizing committee, noted, “Since its origin, the African School of Physics program has been carefully selected to capture the needs of African society. Our program is continuously adapting to the new host country, with broader educative reach to high school levels and policy makers, along with more topical courses—for example, in high-performance computing, energetics, and environmental issues.

“With the ambition of maximizing its achievements, the ASP opens the gates to African talents and enables large-scale research infrastructure like the proposed African Light Source, while empowering universities and strengthening industries,” she said.

Assamagan and Darve maintain the ASP website, which aims to enhance the ASP effort and develop open-source courses, including an archive of webinars recorded during the pandemic on topics such as particle accelerators, light sources, and neutrons sources. “This digital component enhances the sustainability of the project,” Darve said.

The website also includes a host of other resources for interested students, instructors, and sponsors. Selected participants receive full support for their travel, room, and board for the two-week program.

In addition to receiving support from the U.S. Department of Energy and Brookhaven Lab, ASP has received significant sustained support from The Abdus Salam International Centre for Theoretical Physics (ICTP) in Italy, the South African National Research Foundation, the South African Institute of Physics, and Italy’s National Institute for Nuclear Physics (INFN). A range of other international agencies and organizations have also made contributions.