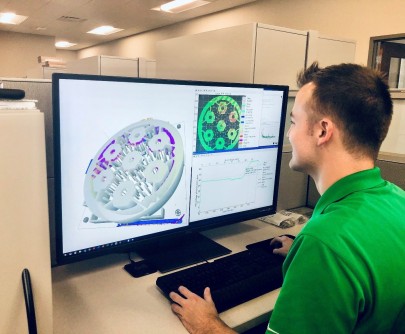 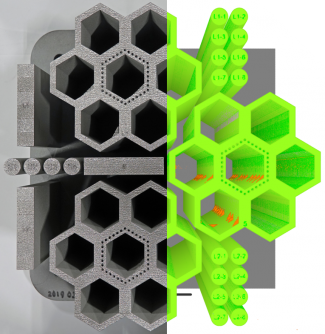 Peregrine detects an anomaly in a component being additively manufactured on a powder bed printer.

The software, named Peregrine, supports the advanced manufacturing “digital thread” being developed at ORNL that collects and analyzes data through every step of the manufacturing process, from design to feedstock selection to the print build to material testing.

“Capturing that information creates a digital ‘clone’ for each part, providing a trove of data from the raw material to the operational component,” said Vincent Paquit, who leads advanced manufacturing data analytics research as part of ORNL’s Imaging, Signals and Machine Learning group. “We then use that data to qualify the part and to inform future builds across multiple part geometries and with multiple materials, achieving new levels of automation and manufacturing quality assurance.”

The digital thread supports the factory of the future in which custom parts are conceived using computer-aided design, or CAD, and then produced by self-correcting 3D printers via an advanced communications network, with less cost, time, energy and materials compared with conventional production. The concept requires a process control method to ensure that every part rolling off printers is ready to install in essential applications like cars, airplanes, and energy facilities.

To devise a control method for surface-visible defects that would work on multiple printer models, ORNL researchers created a novel convolutional neural network — a computer vision technique that mimics the human brain in quickly analyzing images captured from cameras installed on the printers. The Peregrine software uses a custom algorithm that processes pixel values of images, taking into account the composition of edges, lines, corners and textures. If Peregrine detects an anomaly that may affect the quality of the part, it automatically alerts operators so adjustments can be made.

The software is well suited to powder bed printers. These printers distribute a fine layer of powder over a build plate, with the material then melted and fused using a laser or electron beam. Binder jetting systems rely on a liquid binding agent rather than heat to fuse powdered materials. The systems print layer by layer, guided by the CAD blueprint, and are popular for the production of metal parts.

However, during the printing process, problems such as uneven distribution of the powder or binding agent, spatters, insufficient heat, and some porosities can result in defects at the surface of each layer. Some of those issues may happen in such a very short timeframe that they may go undetected by conventional techniques.

“One of the fundamental challenges for additive manufacturing is that you’re caring about things that occur on length-scales of tens of microns and happening in microseconds, and caring about that for days or even weeks of build time,” said ORNL’s Luke Scime, principal investigator for Peregrine. “Because a flaw can form at any one of those points at any one of those times, it becomes a challenge to understand the process and to qualify a part.”

Peregrine is being tested on multiple printers at ORNL, including as part of the Transformational Challenge Reactor (TCR) Demonstration Program that is pursuing the world’s first additively manufactured nuclear reactor. TCR is leveraging ORNL’s rich history in nuclear science and engineering, materials science and advanced manufacturing to develop a microreactor with newer materials in less time at a lower cost, ensuring the future of this important carbon-free energy source.

“For TCR in particular, you could have a scenario in which the regulator will want detailed data on how a part was manufactured, and we can provide specs with the database built using Peregrine,” Scime said.

“Establishing correlations between these signatures collected during manufacturing and performance during operation will be the most data-rich and informed process for qualifying critical nuclear reactor components,” said Kurt Terrani, TCR program director. “The fact that it may be accomplished during manufacturing to eliminate the long and costly conventional qualification process is the other obvious benefit.”

ORNL researchers stress that by making the Peregrine software machine-agnostic — able to be installed on any powder bed system — printer manufacturers can save development time while offering an improved product to industry. Peregrine produces a common image database that can be transferred to each new machine to train new neural networks quickly, and it runs on a single high-powered laptop or desktop. Standard cameras were used in the research, ranging in most cases from 4 to 20 megapixels and installed so they produce images of the print bed at each layer. The software has been tested successfully on seven powder bed printers at ORNL so far, including electron beam melting, laser powder bed, and binder jetting, as detailed in the journal Additive Manufacturing.

“Anything we can do to help operators and designers know what works and what doesn’t helps with the confidence that the part will be okay for use,” Scime said. “When you have a 3D map of every pixel where the network thinks there is an anomaly and what it thinks the problem is, it opens up a whole world of understanding of the build process.”

As the monitoring system has evolved, Scime said researchers are able to combine the image data with data from other sources such as the printer’s log files, the laser systems and operator notes, allowing parts to be uniquely identified and statistics from all parts tracked and evaluated.

The AI software was developed at the Manufacturing Demonstration Facility at ORNL, a U.S. Department of Energy user facility that works closely with industry to develop, test and refine nearly every type of modern advanced manufacturing technology.

“There’s no place else like the MDF where this machine-agnostic algorithm could have been developed, simply because we have so many machines and so many builds going on all the time in the course of our research,” Scime said. “Access to data is key. Here, we have the ability to place sensors easily and the technicians to make sure everything works and that we’re getting our data. With the variety of scientific expertise available here, it’s been easy to find experts to help with all the challenges involved.”

In other process control work, MDF researchers are developing methods to monitor for defects on the subsurface of builds and to detect porosity that may form in deeper layers, including the use of photodiodes and high-speed cameras.

“We’ve been doing welding for hundreds of years, but additive has only been around for a couple of decades and we don’t know what the problems look like in some cases,” Scime said. “Machine learning techniques allow us to collect and analyze a lot of data quickly. We can then identify those problems and gain the knowledge we need to better understand and prevent anomalies.”

The work was sponsored by DOE’s Office of Energy Efficiency and Renewable Energy’s Advanced Manufacturing Office and the DOE Office of Nuclear Energy, which funds the TCR program.

ORNL is managed by UT-Battelle for the U.S. Department of Energy's Office of Science, the single largest supporter of basic research in the physical sciences in the United States. DOE’s Office of Science is working to address some of the most pressing challenges of our time. For more information, please visit https://energy.gov/science. 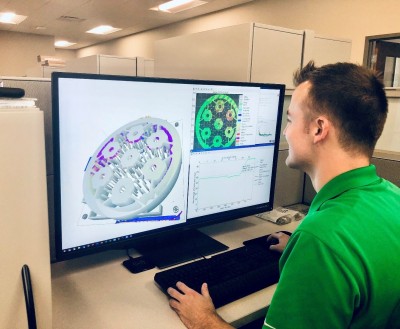 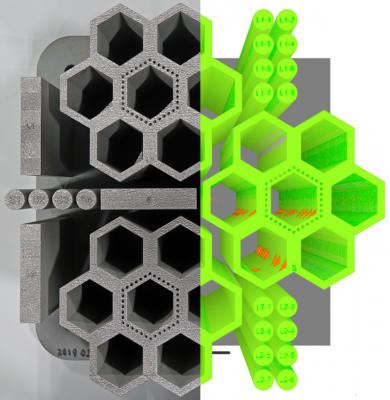 Caption: Peregrine detects an anomaly in a component being additively manufactured on a powder bed printer.