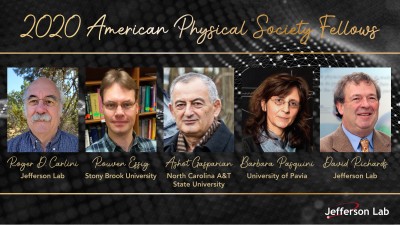 Newswise — NEWPORT NEWS, VA – Five researchers who are affiliated with the U.S. Department of Energy’s Thomas Jefferson National Accelerator Facility have been selected by their professional peers for the distinct honor of Fellow of the American Physical Society.

“We are proud to see both our staff and members of our User community recognized by their peers for significant contributions to the field of Nuclear Physics,” said Jefferson Lab Director Stuart Henderson. “Each one of these new APS Fellows has furthered our understanding of the subatomic world in their own, unique way, and it’s through these many diverse and important contributions that we move science forward.”

According to the APS, each of these researchers has made exceptional contributions to the physics enterprise, from research delving into the heart of matter to discover the proton’s hidden secrets, to experiments measuring the elusive neutral pion, to a lifetime of work developing and advancing new tools that enable these studies.

The newly selected APS Fellows for 2020 include:

Roger D. Carlini
Jefferson Lab senior staff scientist
Citation: For intellectual leadership in a series of proton-proton and electron-proton parity violation experiments, culminating in the first measurement of the weak charge of the proton as a test of the Standard Model and the determination of the weak couplings to the up and down quarks.

Rouven Essig
Stony Brook University
Citation: For broad and innovative contributions to the search for hidden sectors and low mass dark matter, and for developing and realizing new detection concepts both for fixed target and for sub-GeV dark matter direct detection experiments.

Ashot Gasparian
North Carolina A&T State University
Citation: For leadership in carrying out the world’s most precise measurement of the neutral pion radiative decay width, and for major contributions towards the resolution of the proton charge radius puzzle.

Barbara Pasquini
University of Pavia
Citation: For important work developing and improving theoretical tools, including dispersion relations, light-front models, and Wigner distributions which increase the sensitivity of both low- and high-energy experiments such as Compton scattering and tomography, to the fundamental structure of hadrons.

The APS Fellowship Program recognizes members who may have made advances in physics through original research and publication, or made significant innovative contributions in the application of physics to science and technology, or may have made significant contributions to the teaching of physics or service and participation in the activities of APS, according to the APS website. Each year, no more than one half of one percent of its membership may be elected to the status of fellow. The APS has more than 55,000 members employed in academia, national laboratories and industry in the United States and worldwide. The full list of 2020 APS Fellows can be found here.