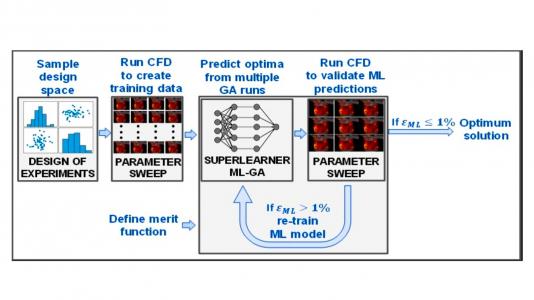 Newswise — By embedding machine learning into the design process, ML-GA dramatically speeds up computer-aided virtual prototyping, shrinking the product development phase from a few months to a few days while also bringing down computational costs.

The recognition marks the second major success for the pair. Argonne won an award of $750,000 three years ago from the DOE’s Vehicle Technologies Office, within the Office of Energy Efficiency and Renewable Energy, through the Technology Commercialization Fund (TCF) program to integrate novel features into ML-GA and make it more efficient and portable. It streamlines the process of integrating the software with Parallel Works’ commercial platform.

Current industry standards for design, which have long favored computer simulation over physical experimentation, remain remarkably slow. Advanced engines for automotive applications, for example, contain many design parameters which can become time consuming and costly to optimize, even with computer modeling.

By embedding machine learning into the design process, ML-GA dramatically speeds up computer-aided engineering simulation-driven virtual prototyping, shrinking the product development phase from a few months to a few days — and, in doing so, brings down computational costs as well.

Pinaki Pal, a research scientist in Argonne’s Center for Transportation Research (CTR), led the effort for the laboratory.

“If you are able to design a product in a much shorter timeframe, you are also accelerating its development and introduction to the market,” he said. ​“This was a big success. Our ML-GA technology can be incredibly useful for design optimization of products in a variety of markets.”

Greg Halder, former scientist and current business development executive at Argonne, said he is thrilled to see the laboratory’s efforts in AI honored by such a prestigious organization.

“This is particularly amazing because we are being recognized by our peers,” he said. ​“This is a new, exciting technology. We are simply thrilled. This all came together rather quickly, moving from Argonne’s software discovery to commercial adoption in just a few years.”

The difference between ML-GA and more traditional methods is that Argonne’s software learns from simulation data adaptively. Scientists run simulations in small batches — called iterations — and train a machine learning (ML) surrogate model on the simulation data. This surrogate model serves as a replacement for the simulation itself within a genetic algorithm (GA) optimization pipeline: The overall runtime is greatly reduced by this much faster surrogate model, which computes the objective functions very quickly.

Still, there are challenges to this approach. ML surrogate models may require a lot of simulation training data to achieve high accuracy. To circumvent this bottleneck, ML-GA uses a Super Learner framework which combines multiple ML algorithms to make predictions as good as or better than that made by each individual ML algorithm. In addition, an active learning technique is employed to select the best possible design points to simulate during each successive iteration.

“This allows for efficient exploration of large design spaces — and dramatically reduces the number of simulations needed during the design process,” said Pal.

Argonne recently reported the benefits of these advanced ML-GA capabilities for automotive engine design optimization in a research article published in the renowned International Journal of Engine Research, in collaboration with Parallel Works, Inc., and Convergent Science, Inc.

“Our team is excited to integrate Argonne’s advanced ML-GA technology with high performance computing and make it accessible through our Learner Works product family for use in critical industry applications and cutting-edge industrial research,” Wilde said.

The company is also working with government and industry researchers to evaluate its use in oceanographic exploration, weather prediction and life science discovery.

​“Our customers are increasingly focused on achieving the cost-saving benefits of machine learning technology to design improved products and deliver advanced services,” said Shaxted, president of the company. ​“Parallel Works provides easy and scalable access to these benefits and is thrilled to be part of the team receiving this FLC honor.”

“By recognizing Argonne’s efforts to develop and commercialize this unique software technology, the FLC award exemplifies success in our mission to positively impact energy production, storage, conversion, distribution and efficiency,” he said.

The awardees will be celebrated during the FLC Midwest & Southeast Regional Meeting held virtually from September 21-23.

The FLC was organized in 1974. More than 300 federal laboratories, facilities and research centers and their parent agencies make up the FLC community today.