Argonne explores how ants, bees, and fruit flies can be the next big buzz in artificial intelligence 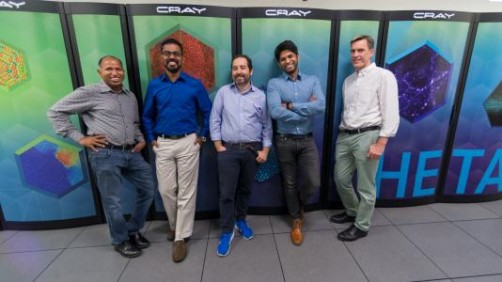 This team took steps in physics, computer science and materials science in order to design and test a new computer chip that can perform and adapt well on a minuscule amount of power. From left to right: Anil Mane, Prasanna Balaprakash, Angel Yanguas-Gil, Sandeep Madireddy and Jeff Elam.

Newswise — Space. The final frontier. And on Nov. 2, 2018, NASA’s Voyager 2 spacecraft crossed into the vastness of interstellar space, following Voyager 1, which made the leap six years earlier. Since their launch in 1977, the two probes have traveled more than 11 billion miles across the solar system, lasting much longer than scientists anticipated.

Powered by plutonium and drawing 400 watts of power each to run their electronics and heat, the probes still snap photos and send them back to NASA. After 42 years, though, only six of Voyager 2’s 10 instruments still work, and NASA scientists expect the probe will go dark in 2025, well before it leaves our Solar system.

But what if Voyager 2 needed only a couple of watts of power? Could it survive long enough to continue its explorations far into the future?

These are the types of questions that scientists are asking at the U.S. Department of Energy’s (DOE) Argonne National Laboratory. Here, Angel Yanguas-Gil, principal materials scientist in the Applied Materials division, is leading an interdisciplinary team that is rethinking the design of computer chips to not only perform and adapt better, but to do so using a minuscule amount of power — around one watt.

“In a biological system, the network can learn by itself and offers a much higher degree of flexibility. Evolutionary pressure on insects produces very efficient, adaptive computing machines. Bees, for instance, exhibit half the number of distinct cognitive behaviors of dolphins, just in a much smaller volume.” — Angel Yanguas-Gil, principal materials scientist, Applied Materials division

Inspired by biology, the team’s newly designed computer chips, which rely on new blueprints and materials, can bypass the “cloud” to learn on the fly, radically conserve power and adapt to extreme environments, such as deep space and radioactive areas — all while delivering reliable, accurate results.

The soft underbelly of artificial intelligence

Artificial intelligence pervades our lives, providing countless benefits such as powering voice-activated digital assistants, guiding self-driving cars, recognizing our faces, and helping us automatically respond to texts and emails. AI, however, has some limitations: it relies on reams of data and ever-faster hardware — to which it must always be connected — demands a great deal of power and has limited flexibility.

How is artificial intelligence inflexible? The answer lies in how a popular form of AI, called a neural network, spots meaningful arrangements in data. Most neural networks, which uncover patterns and relationships in data without explicit programming, are static, designed for a specific task, such as recognizing images. Once a network learns that task, it can’t switch gears and start driving a car.

“The scene changes, the distribution of data is slightly different than before, and what you learned no longer applies,” explained Sandeep Madireddy, a computer scientist in Argonne’s Mathematics and Computer Science (MCS) division, who has joined Yanguas-Gil’s team.

Insects, on the other hand, are versatile and can solve problems in different ways, said Yanguas-Gil.

“In a biological system, the network can learn by itself and offers a much higher degree of flexibility,” he said. “Evolutionary pressure on insects produces very efficient, adaptive computing machines. Bees, for instance, exhibit half the number of distinct cognitive behaviors of dolphins, just in a much smaller volume.”

To prove this point, Yanguas-Gil and Argonne chemists Jeff Elam and Anil Mane designed and simulated a new neuromorphic chip inspired by the tiny brain structure of bees, fruit flies and ants. The team created a network from scratch that contains two pivotal discoveries:

Testing of the new chip design revealed that it was as accurate as the standard design, but it learned much more quickly and retained its accuracy — even under 60 percent error rates in its internal operation.

“With neural networks, error rates of 20 percent erode the system’s accuracy,” said Yanguas-Gil. “Our system can tolerate much higher error rates and sustain the same accuracy as a perfect system. This makes it a good candidate for machines that spend 30 years in space.”

With these results, the team won the Best Paper Award in August at the 2019 Institute of Electrical and Electronics Engineers (IEEE) Computer Society’s Space Computing Conference.

After his team developed the blueprint for the neuromorphic chip, Yanguas-Gil enlisted Madireddy and Prasanna Balaprakash, also a computer scientist in the lab’s MCS division, and tapped Argonne’s powerful computing tools to maximize its performance.

Using the Theta supercomputer at the Argonne Leadership Computing Facility — a DOE Office of Science User Facility — the duo ran the neuromorphic blueprint through a software package they developed called DeepHyper, which performs automated machine learning for neural networks. DeepHyper tests thousands of different insect brain configurations, generating better variations until it identifies the right one for a particular task.

With each set of configurations, DeepHyper learns — evaluating and then generating the next configuration set based on what it has seen. “It works in much the same way humans learn to play a game, “said Balaprakash. “You play, you get a score, and then — based on the feedback and your mistakes — you slowly get better and better.”

In a production scenario, all of this learning will be encoded onto the neuromorphic chip, and the chip itself will be able to adapt, shifting gears to solve each type of task.

How to change the game

These advances are only the beginning. Once Yanguas-Gil and his team uncover the best-performing chip design, they must agree on its best uses. Fortunately, there seems to be endless demand for a chip that combines computer intelligence — right where it’s needed — with low power requirements.

What if, for instance, scientists could place low-power sensors in national forests to act as an alert for wildfires?

Both Yanguas-Gil and Balaprakash also point to urban areas, where the chip might monitor for potential dangerous chemicals. Argonne, in partnership with the University of Chicago and the City of Chicago, has already installed 120 smart sensing devices around the city to measure factors such as air quality, traffic and climate — a National Science Foundation-funded project known as the Array of Things.

These smart devices use Argonne’s Waggle technology platform, which include remotely programmable high performance computing devices so that AI capabilities can be embedded with the sensors. In this way, for instance, image analysis can yield insights into the amount and character of street activities and even human interactions.  In a real sense, these devices can use AI techniques to “learn” about their environments in order to detect new or unusual events or patterns.

“Imagine if those sensors could learn in real time and detect poisonous gas?” asked Balaprakash.

In theory, Yanguas-Gil agrees that neuromorphic chips could act as mass spectrometers to learn in real time to recognize different molecule fragments without being explicitly programmed. “That would be a game changer,” he said.

The views, opinions and/or findings expressed are those of the author and should not be interpreted as representing the official views or policies of the Department of Defense or the U.S. Government.