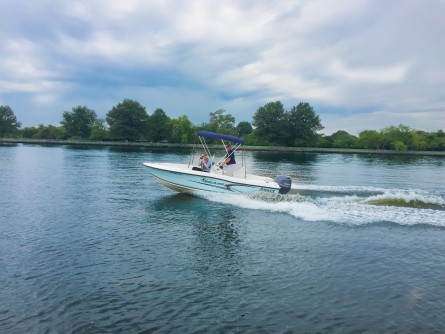 All that fun in the sun comes with a cost, however, particularly in terms of burnt fuel and emissions.

In an effort to reduce boating's environmental impact, the Department of Energy’s Argonne National Laboratory has teamed with industry to investigate alternative fuels for recreational marine applications.

The laboratory, in collaboration with industrial partner Bombardier Recreational Products (BRP), and with support from the marine industry, including the National Marine Manufacturers Association (NMMA) and American Boat and Yacht Council, has demonstrated the safety and effectiveness of a blend of fuel that includes 16 percent butanol for use in watercraft.

This demonstration has culminated in the approval of the fuel by the NMMA, a development sure to make waves in the boating arena.

The newly approved fuel has the potential to serve as an alternative to the 15 percent ethanol blend for much of the recreational boating fleet.

The approval is the result of several years of cooperative research between BRP and Argonne, whose research was funded by the Vehicle Technologies Office within DOE’s Office of Energy Efficiency and Renewable Energy. The research involved the evaluation of performance, efficiency and emissions, including particulates, as well as durability and lubrication effects over a wide range of recreational boat engine types and sizes from several manufacturers.

“Butanol at 16 percent blend level works as well as ethanol at 10 percent under tested conditions,” said Argonne’s Thomas Wallner, a principal investigator at the laboratory’s Center for Transportation Research. “There was a push to increase the amount of ethanol in fuel, from 10 to 15 percent,” he said.

Wallner had previous experience researching butanol for cars and trucks, but boats were new territory.

Increasing the percentage of bioenergy in the boating mix would provide environmental benefits, however, the technologies used by a significant percentage of boats, such as carburetors and open-loop controls, are not immediately well-suited to the further addition of ethanol in fuel. Furthermore, infrequent usage patterns typical for recreational boats can cause challenges at increased ethanol levels. Because ethanol attracts water, dormancy can allow the surrounding water to enter the fuel tank and form a layer inside, adversely affecting engine performance.

Butanol, on the other hand, lacks the water attraction properties of ethanol, mitigating the potential engine performance issue.

Beyond the performance benefits, butanol offers an additional advantage: it can be made from the same feedstock as ethanol. Essentially, butanol provides the environmental benefits without the issues that can be caused by increased ethanol use – a breakthrough made possible through strategic collaboration between Argonne and its industrial partners.

Argonne National Laboratory seeks solutions to pressing national problems in science and technology. The nation's first national laboratory, Argonne conducts leading-edge basic and applied scientific research in virtually every scientific discipline. With employees from more than 60 nations, Argonne researchers work closely with researchers from hundreds of companies, universities, and federal, state and municipal agencies to help them solve their specific problems, advance America's scientific leadership and prepare the nation for a better future. Argonne is supported by the Office of Science of the U.S. Department of Energy. The Office of Science is the single largest supporter of basic research in the physical sciences in the United States, and is working to address some of the most pressing challenges of our time. For more information, please visit science.energy.gov.