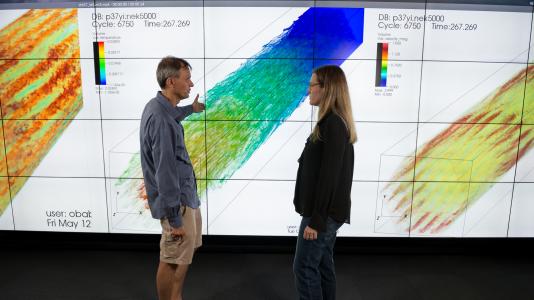 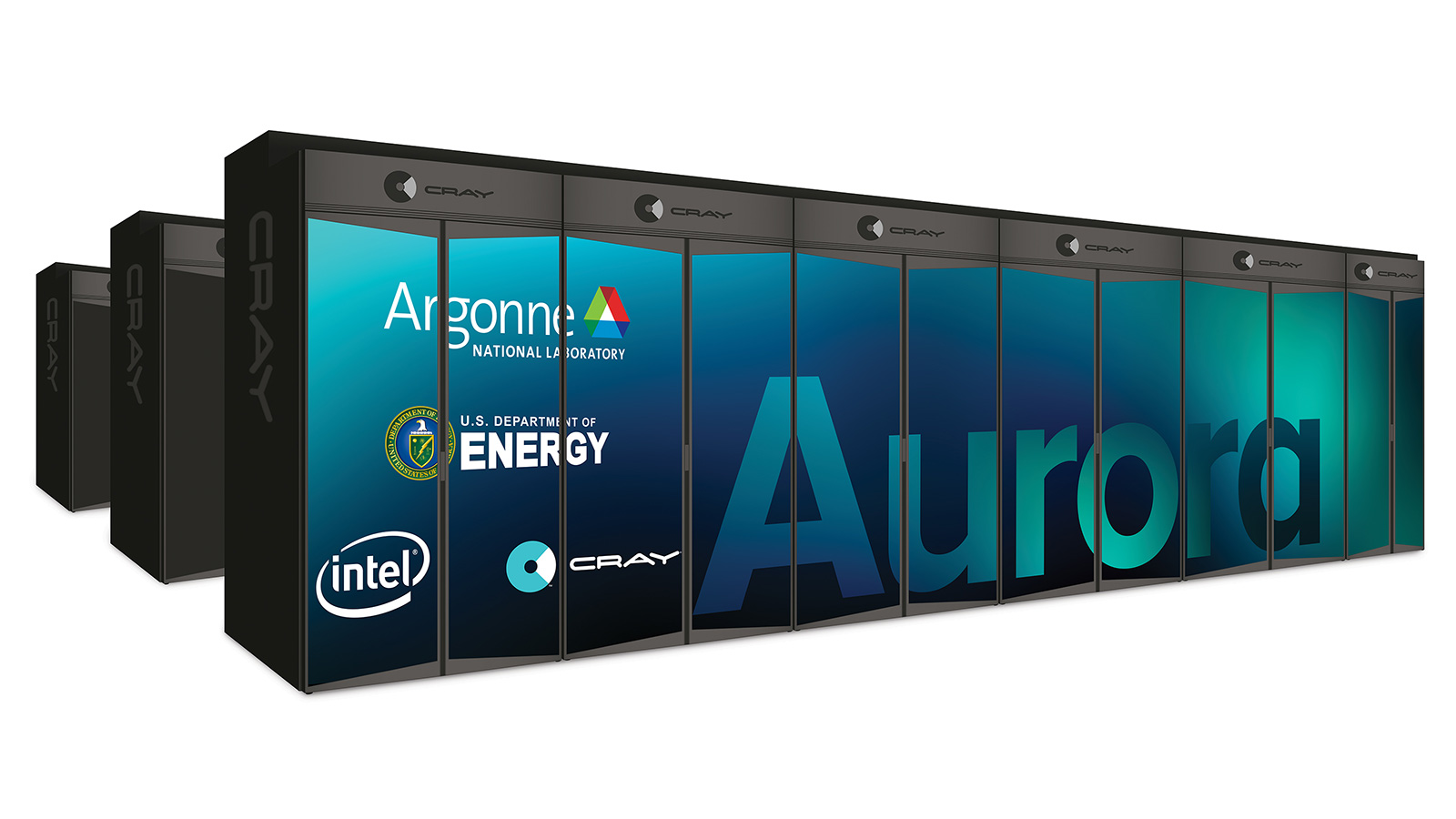 The U.S. Department of Energy’s Aurora supercomputer at Argonne National Laboratory will provide the powerful processing capability needed to run the computational codes that support the nuclear modeling and simulations efforts when it comes online in 2021.

Newswise — Designing a new type of nuclear reactor is a complicated endeavor requiring billions of dollars and years of development.  What’s more, there are a vast array of different proposed configurations for next-generation nuclear reactors that scientists hope will produce electricity safely, cost effectively and efficiently.

Because of the high cost, scientists are harnessing the power of high-performance computing to tackle many of the challenges associated with reactor design and performance.

At the U.S. Department of Energy’s (DOE) Argonne National Laboratory, researchers are running a broad suite of computational codes on the laboratory’s supercomputers housed at the Argonne Leadership Computing Facility, a DOE Office of Science User Facility, leveraging resources available at only a few sites around the world to address some of the most complex and large-scale scientific challenges.

“We have a good understanding of the laws underpinning reactor physics and thermal hydraulics, so modeling and simulation tools give us the ability to analyze potential reactor designs virtually,” said Argonne nuclear engineer Emily Shemon.

The end goal of nuclear modeling and simulation efforts at Argonne and elsewhere in the DOE’s national laboratory complex is to remove some of the initial obstacles that the nuclear industry faces as it contemplates design, licensing and deployment of next-generation reactors. “The purpose of the labs’ modeling efforts is to fill in the knowledge gaps for industry,” Shemon said. “They may be able to use our codes and models to inform their design decisions if we can do some of the legwork.”

One major research effort at Argonne focuses on simulating the turbulent flow in sodium-cooled fast reactors. These reactors have intrigued scientists for decades because of their ability to use fuel efficiently, producing less waste than the existing fleet of light water-cooled reactors.

Sodium-cooled fast reactors also have a considerable inherent advantage: there are several built-in safety measures that kick in automatically even in cases when the reactor systems fail.

As coolant flows around a bundle of fuel pins in the reactor core, it carries heat away from the fuel assembly. Heated sodium tends to float on top of cooler sodium, creating a lava lamp-like circulation pattern that prevents any one area from getting too hot.

Visualizing the intricate movements of the whorls and eddies of hot and cold fluid requires high-performance computing, said Argonne computational engineer Aleksandr Obabko. “We try to model turbulence directly, as close to the needed resolution as possible, using supercomputers,” he said. “We need supercomputers because there are a lot of vortices to model, and because they all contribute to the process of mixing.”

Argonne researchers also use models to illustrate the geometric effects of the reactor or the fuel assembly on the heat transport and fluid flow.

To model the mixing and turbulence in a nuclear reactor, Obabko and his colleagues use a computational code called Nek5000 to solve questions related to computational fluid dynamics. Nek5000 is a general purpose fluid mechanics code used for modeling vascular flows, aerodynamics, and internal combustion engines as well as nuclear reactor environments.

Nek5000 provides a number of advantages over competing computational algorithms, but most notably it dramatically cuts the time and computational expense needed to resolve solutions. “By the time most other codes get to 80 percent of the solution, we’re at 90 percent, and that can make a big difference in terms of computing expense,” said Argonne computational scientist Paul Fischer, who designed Nek5000.

By themselves, computer codes can shed only so much light on the inner workings of a nuclear reactor. To know how precisely the output of a computational model conforms to reality requires the ability to compare the results with the data from experiments, a process known as validation. For some advanced reactor types, such experimental data are limited and expensive to generate to cover all design variations. Therefore, modern modeling and simulation capabilities aim to achieve a higher level of predictiveness without relying so heavily on experiments.

“We still can’t fully trust our computational models without experimental data, but we can make use of whatever limited experimental data are available,” Shemon said. “So, what we have is an iterative process in which designers use our software to do the preliminary analysis, allowing them to narrow down design choices or make improvements to their systems, and validate their final design with more targeted tests.”

A truly useful model not only reproduces what scientists can see experimentally, but it can also complement known data and allow researchers to make predictions with more confidence. This is particularly important for advanced reactor designs with different kinds of coolant and fuel choices.

Because there are so many potential new designs that have been proposed — ranging from sodium-cooled fast reactors like those studied by Obabko to those cooled by gas or by molten salts — advanced computing represents the best avenue researchers have to assess the capabilities of their designs.

In most cases, computer codes must exchange information about the heat generation rates, temperatures, and stresses and strains because the neutronic, thermal and structural phenomena have an impact on each other. In this way, Argonne’s nuclear modeling program has two goals: First, to develop core reactor physics, thermal hydraulics, structure mechanics, and fuels and materials modeling tools; second, to create multiphysics analysis capabilities that capture the interdependence among all these fields.

Even when researchers do not have the ability to directly validate their codes, developing higher-fidelity closer-to-first-principles models represents an improvement in many ways on the low-order codes that may have been validated in the past. For instance, higher-fidelity codes allow researchers to obtain a more precise understanding of quantities for which they previously only had an average value.

“Previous low-order codes were accurate, but they were, in a sense, blurry,” Shemon said. “These new high-fidelity codes give us the ability to be much more precise in terms of energy, space and time.”

One way in which the high-fidelity codes can improve the design and operation of a reactor is by reducing uncertainty in the tolerances — or temperature margins — required for safe and efficient reactor operation. In one example, Argonne researchers run models with best-case scenarios, in which fuel pins and their cladding are manufactured exactly to specifications. Then, they also run worst-case scenarios, in which these components differ from their ideal to account for uncertainties and tolerances, and compare the difference in how the reactor virtually behaves to evaluate the safety margins.

In Shemon’s view, this project and others at Argonne support a broader, overarching objective. “Our main goal is to increase the availability of information for advanced reactor designs,” she said. “We’re trying to enable safer, faster, more economical design through modeling and simulation. Everything we do is geared toward that.”

The work is funded by the Nuclear Energy Advanced Modeling and Simulation (NEAMS) Program within DOE’s Office of Nuclear Energy. The research is also supported by DOE’s Advanced Scientific Computing Research (ASCR) program and the Exascale Computing Project (ECP), a collaborative effort of the DOE Office of Science and the National Nuclear Security Administration, that seeks to provide breakthrough modeling and simulation solutions through exascale computing.

This research was supported by the Exascale Computing Project (17-SC-20-SC), a joint project of the U.S. Department of Energy’s Office of Science and National Nuclear Security Administration, responsible for delivering a capable exascale ecosystem, including software, applications and hardware technology, to support the nation’s exascale computing imperative.

Established by Congress in 2000, the National Nuclear Security Administration (NNSA) is a semi-autonomous agency within the U.S. Department of Energy responsible for enhancing national security through the military application of nuclear science. NNSA maintains and enhances the safety, security, and effectiveness of the U.S. nuclear weapons stockpile without nuclear explosive testing; works to reduce the global danger from weapons of mass destruction; provides the U.S. Navy with safe and effective nuclear propulsion; and responds to nuclear and radiological emergencies in the U.S. and abroad. Visit nnsa.energy.gov for more information.

Caption: The U.S. Department of Energy’s Aurora supercomputer at Argonne National Laboratory will provide the powerful processing capability needed to run the computational codes that support the nuclear modeling and simulations efforts when it comes online in 2021.