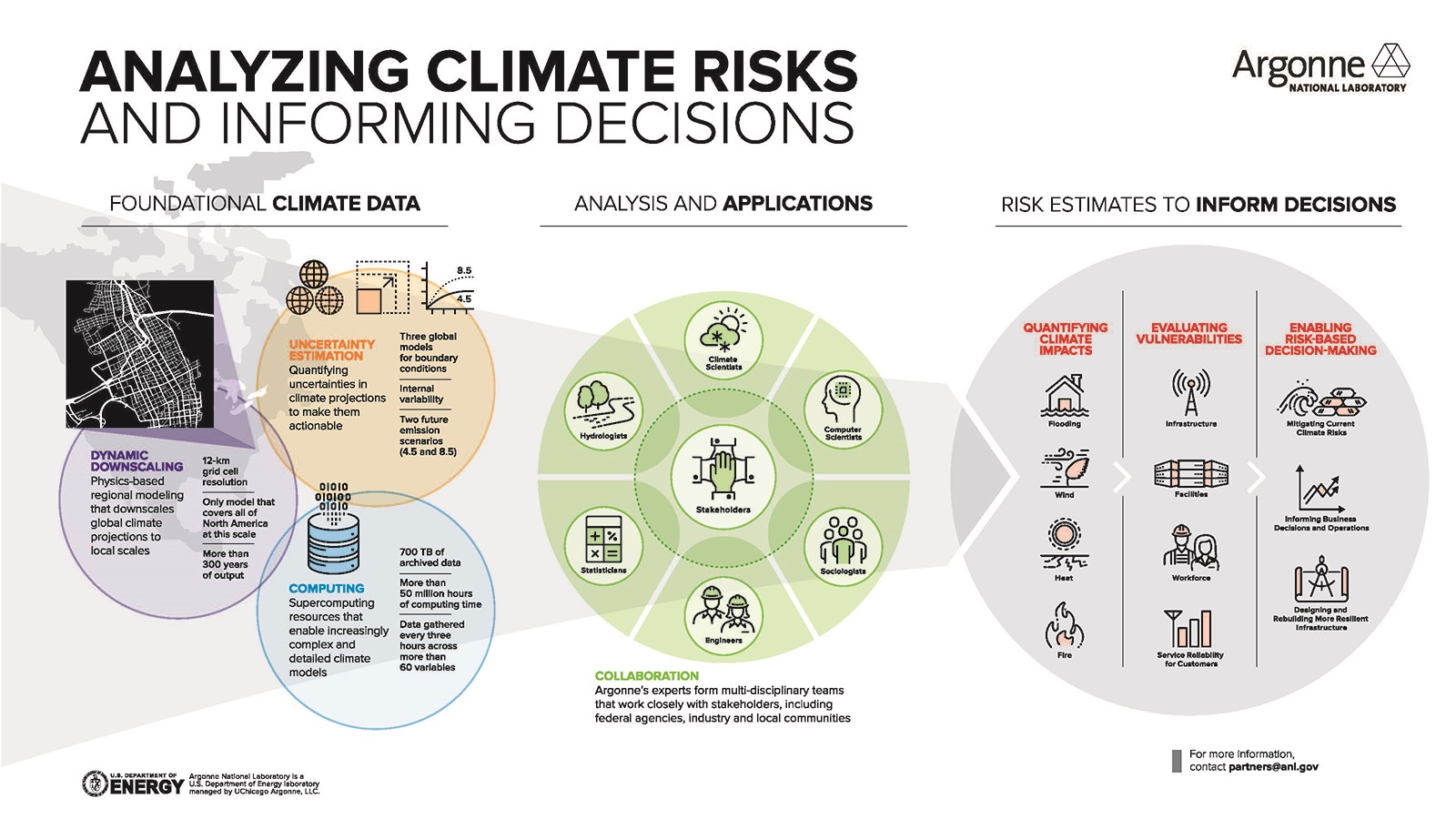 For over a year, the U.S. Department of Energy’s (DOE) Argonne National Laboratory and AT&T have been working together to project risks from a changing climate on America’s Southeastern region. Today, they announced that they’re extending their analysis to cover the contiguous U.S.

In this ongoing collaboration, Argonne researchers are projecting the impacts of climate at regional, local and even neighborhood scales, using high-resolution models and a wide range of statistical methods for estimating uncertainty. AT&T, in turn, is using these insights as input for its Climate Change Analysis Tool that enables the company to project how changes in climate will impact company infrastructure and operations up to 30 years into the future.

“What we’re figuring out through this project is how climate change modeling can help us develop projections that will help develop adaptation strategies and be more resilient.” — Rao Kotamarthi, chief scientist within Argonne’s Atmospheric Science and Climate research group.

When the project first began, the collaborators were focused on modeling inland flooding caused by rainfall, coastal flooding from hurricanes, and wind events across four states: Florida, Georgia and North and South Carolina. As their analysis expands to cover the contiguous U.S., researchers will add drought and wildfire risks.

“AT&T is building climate resilience because our customers, our employees and our communities depend on us,” said Scott Mair, president of AT&T Technology & Operations. ​“By extending our work with Argonne National Laboratory to more states and including additional climate impacts, we can make more informed decisions, prepare our network for future extreme weather events and keep people connected when it matters most.”

By helping AT&T — one of America’s largest telecommunications, media and technology companies — understand climate change risks at a national level, Argonne is helping the company better ensure the resilience of its U.S. infrastructure. Hazards vary from coast to coast, region to region and even neighborhood to neighborhood, making it difficult for stakeholders in industry, agriculture and governments to understand how to adapt. Insights from the laboratory can help them make data-driven decisions to manage risk.

“Adaptation will be one of the biggest challenges our communities will face,” said Rao Kotamarthi, chief scientist within Argonne’s Atmospheric Science and Climate research group. ​“What we’re figuring out through this project is how climate change modeling can help us develop projections that will help develop adaptation strategies and be more resilient.”

As it did with the initial Southeastern pilot, AT&T will also make Argonne’s data from this expansion available to the general public, which could inspire new scientific applications that could benefit communities at large. With people across the country able to access Argonne’s national, high-resolution climate dataset, they can do their own types of analyses and compare what they see with others.

“Comparisons are usually hard to do since people from different regions typically use different data and models. Having a national climate data set makes this a lot easier because everything will come from the same source,” said Tom Wall, the program lead for Engineering and Applied Resilience at Argonne. ​“Sharing analyses and techniques across the country will hopefully lead to greater collaboration.”