Argonne poised for pivotal discoveries and impact in a quantum world 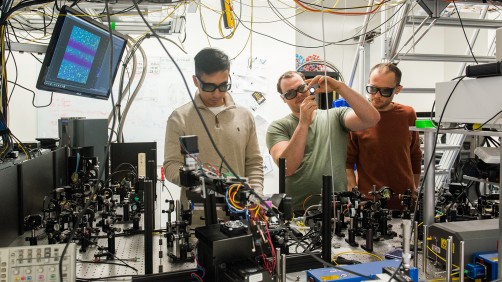 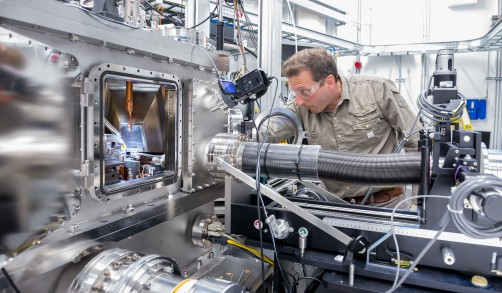 Nanoscientist Martin Holt reveals buried strain in quantum devices through the use of the shared Hard X-ray Nanoprobe at the Center for Nanoscale Materials and Advanced Photon Source at Argonne National Laboratory. 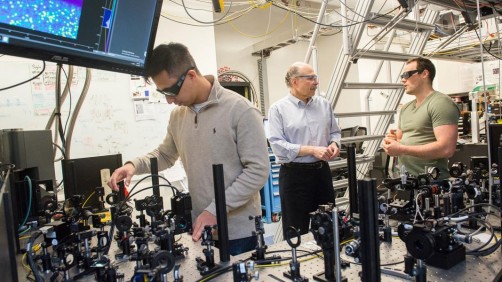 Newswise — Quantum materials display unusual properties at the atomic and subatomic scale that, if properly engineered, could lead to new classes of devices and computing capabilities that far exceed the capabilities of existing technology.

Take, for example, manipulating how light and matter interact with each other in silicon carbide. Silicon carbide, a hard, refractory crystalline compound, is widely used in modern electronics. A new X-ray technique developed by researchers at the U.S. Department of Energy’s (DOE) Argonne National Laboratory may help scientists learn more about its nanoscale properties.

“The most exciting thing to me about this entire field is that we don’t actually know where the biggest impact is going to be.” – David Awschalom, Argonne senior scientist and Liew Family Professor in Molecular Engineering at the University of Chicago

The technique focuses a pulsed X-ray beam to a diameter of only 25 nanometers (3,000 to 4,000 times narrower than a human hair), allowing researchers to observe what happens when they create and manipulate an atomic defect within the silicon carbide crystal lattice. This action forces the surrounding atoms to rearrange themselves, which strains the material.

“When you strain these materials, many of their electronic and quantum state properties change,” said David Awschalom, an Argonne senior scientist and Liew Family Professor in Molecular Engineering at the University of Chicago. But until a new tool was developed for the hard X-ray nanoprobe in collaboration with Martin Holt at Argonne’s Center for Nanoscale Materials, no one could actually observe the process as it unfolded.

(Awschalom, Holt and others also used Argonne’s Advanced Photon Source and worked with researchers in Argonne’s Materials Science division and the University of Chicago’s Institute for Molecular Engineering to develop the tool.)

Silicon carbide lends itself to the production of quantum devices that could, for example, transmit secure communications across existing optical fiber networks. But the full extent of its technological potential remains unknown.

This is but one example of multiple laboratory initiatives aimed at enhancing the impact of future breakthroughs in quantum computing, sensing and communications. To do so, Awschalom and his Argonne colleagues are pushing back the scientific frontiers of quantum mechanics, which governs the behavior of matter at the atomic and subatomic world that contrasts with the physics of everyday life in bizarre and counterintuitive ways.

Argonne researchers have long been interested in developing quantum technologies. Paul Benioff, who proposed his pioneering theoretical framework for a quantum computer in the early 1980s, was among the earliest to consider it.

Building upon this legacy, the laboratory has recently redoubled its quantum research efforts. The laboratory’s goal is to better understand and develop technologies based on this nascent field. Argonne is well positioned to contribute to the proposed National Quantum Initiative, which is receiving bipartisan Congressional support, said Supratik Guha, the laboratory’s senior science advisor and director of the Center for Nanoscale Materials.

“Argonne’s multidisciplinary priorities in the quantum realm encompass algorithms and software research, the development of new materials and sensors, and complex simulations of physical and chemical processes,” Guha said. “Our work spans materials discovery for quantum information sciences, finding new practical applications for quantum devices and building the quantum workforce of the future.”

Quantum research has matured quickly in recent years, having arrived at the crossroad between basic research and applied technology, said F. Joseph Heremans, an assistant staff scientist in the Institute for Molecular Engineering and Materials Science division at Argonne.

“The fact that companies like IBM, Google and Intel have started quantum initiatives makes it an increasingly urgent field to work in,” Heremans said. “Progress hinges on many fundamental science questions looking into new systems and materials, as well as the accompanying engineering and technical challenges.”

In the last two years, Argonne has joined multiple quantum research initiatives aimed at overcoming these challenges. The Chicago Quantum Exchange (CQE) was launched in June 2017 as a collaboration between UChicago, Argonne and Fermi National Accelerator Laboratory, with the University of Illinois at Urbana-Champaign joining it in late October 2018. Among its early accomplishments was the establishment of the Quantum Information Science and Engineering Network (QISENET; see sidebar).

Argonne, UChicago and several other universities also have established a partnership with the U.S. Army Research Laboratory (ARL). ARL Central, headquartered at the UChicago Polsky Center for Entrepreneurship and Innovation’s Hyde Park offices and announced in November 2017, aims to accelerate discovery and innovation in focus areas that include experimental and theoretical quantum materials science.

Argonne also is a member and co-leader of the Center for Novel Pathways to Quantum Coherence in Materials, announced last June as a DOE Energy Frontier Research Center. The center seeks to understand quantum coherence—the electronic state that allows quantum computers to function—by building on fundamental materials discoveries that harness the phenomenon in both light and matter and in the interface between light and matter. The DOE has committed $11.7 million to support the center, which is led by Lawrence Berkeley National Laboratory and includes scientists at Columbia University and the University of California, Santa Barbara.

A key component of the new center will be ongoing efforts of Giulia Galli, Argonne senior scientist and Liew Family Professor in Molecular Engineering at UChicago, to identify promising new quantum materials via theoretical modeling.

Much of Argonne’s research seeks to develop better qubits, or quantum bits. These are the technologically enhanced counterparts to the binary digit, or bit, of modern conventional computers.

“A single qubit offers an improvement on both the amount of information stored per bit/qubit and the way information is processed, allowing for new computational capacity,” Heremans said.

Awschalom, for example, leads a team of researchers in developing quantum metamaterials, materials that contain multiple varieties of complicated properties all in one system.

This entails attempting to discover new quantum states in matter to understand what’s needed to build a qubit in a semiconductor, and how to perform quantum transduction.

Through quantum transduction, a quantum state transforms from one mode into another: turning an electron spin—which stores information in an atom—into a photon carrying light, or a photon into a phonon carrying sound.

“Quantum materials offer an opportunity to design devices that blur the interfaces between light, matter and sound,” Awschalom said. “You can build systems so that all three of these properties are integrated into one common platform. For example, one can choose whether the information is processed as a photon, a phonon or the spin of an electron. The Argonne effort is to design and build new types of quantum metamaterials with these exotic properties.”

The immediate challenge is to understand and control the relevant materials science, Heremans said. There are further challenges in building larger arrays of qubits and in improving their uniformity and repeatability.

“In many ways these all boil down to understanding the materials science and how they relate to our quantum defects and bits,” he said. Researchers at Argonne and UChicago have discovered that they can manipulate quantum defects—the missing atoms that change the electronic properties of silicon carbide and other materials—as a quantum physics pathway into the technological world.

Anand Bhattacharya, a physicist in Argonne’s Materials Science division, seeks to answer fundamental questions about superconducting qubits. His team is attempting to tune those qubits with electric fields instead of the more commonly used magnetic fields. Bhattacharya compared the task to reinventing the transistor, this time in the context of superconducting qubits.

“Superconductors are typically made of metals, and when you apply electric fields to conventional metals, nothing much happens to them because they are very good conductors,” Bhattacharya said.

He suspects, however, that materials of a different composition could make it possible to gate the electrons, as controlling their flow is called, with electric fields.

Controlling electron flow with electric fields may help solve two problems with superconducting qubits: addressing them locally using conventional gates and controlling the coupling between them.

Although the compositional details of his materials are as yet unpublished, Bhattacharya adds, “we have one or two promising prospects.”

Qubits existing in a state of quantum coherence evolve in perfect synchronicity. Their decoherence limits the lifetime and performance of a quantum computer.

“If somebody were to gate superconductivity with electric fields at high frequencies it would probably be a very useful part of the puzzle,” he said. “I can imagine getting it integrated in devices very quickly if that happens.”

“The most exciting thing to me about this entire field is that we don’t actually know where the biggest impact is going to be,” Awschalom said. He speculated, however, about the application of quantum sensors to perform magnetic resonance imaging scans of a single atomic nucleus.

Today, a standard hospital MRI procedure typically scans approximately a hundred quadrillion atomic nuclei at a time. But single nucleus scans could, theoretically, rapidly reveal the structure-function relationship of human proteins, fewer than one percent of which are understood today.

“Imagine you had a quantum sensor that could image the structure of a single molecule at the subatomic level,” Awschalom said. “This tool would have the potential to revolutionize biochemistry, perhaps even offer new pathways to design and test pharmaceuticals. It would be a game changer.”

The Advanced Photon Source, the Center for Nanoscale Materials, and the Argonne Leadership Computing Facility are DOE Office of Science User Facilities. 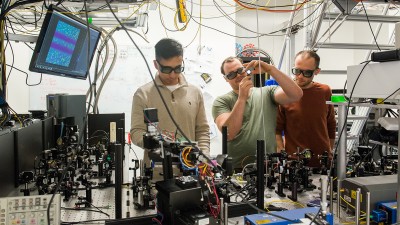 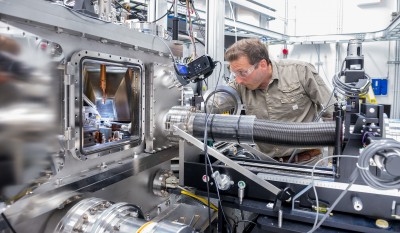 Caption: Nanoscientist Martin Holt reveals buried strain in quantum devices through the use of the shared Hard X-ray Nanoprobe at the Center for Nanoscale Materials and Advanced Photon Source at Argonne National Laboratory. 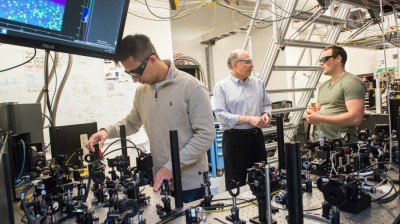 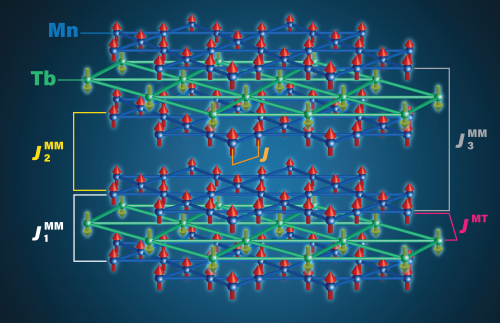