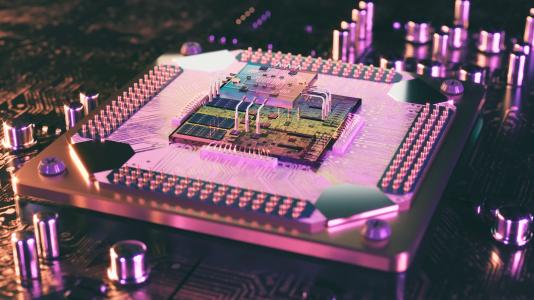 Argonne has received awards totaling more than $1 million from the U.S. Department of Energy for five projects in quantum information science. The awards particularly highlight work in high-energy physics and fusion science.

The grants specifically award projects in the areas of high-energy physics and fusion energy science.

“QIS holds great promise for tackling challenging questions in a wide range of disciplines,” said DOE Under Secretary for Science Paul Dabbar. ​“This research will open up important new avenues of investigation in areas like artificial intelligence while helping keep American science on the cutting edge of the growing field of QIS.”

“Research in QIS can reveal aspects of high-energy physics that we have not yet uncovered, and our expertise in high-energy physics can inform how we apply and make use of QIS.” — Kawtar Hafidi, associate laboratory director for Physical Sciences and Engineering

Research at the intersection of QIS and high-energy physics could yield surprising new discoveries that enrich our understanding of scientific phenomena and principles that scientists are still trying to fully explain. ​“Research in QIS can reveal aspects of high-energy physics that we have not yet uncovered, and our expertise in high-energy physics can inform how we apply and make use of QIS,” said Kawtar Hafidi, Argonne associate laboratory director for Physical Sciences and Engineering.

The five Argonne-involved projects selected by DOE for funding are:

Researchers are searching for the mysterious substance that makes up a quarter of our Universe: dark matter. One popular theory proposes that it is made of particles called axions which signal their presence by converting into electromagnetic waves in the presence of strong magnetic fields. The level of the signal originating from this hypothetical interaction is extremely small and requires novel technology for its detection. Argonne researchers are leading a team to develop the specialized ultra-sensitive detectors that are able to detect electromagnetic waves in the terahertz frequency range. Using a novel combination of superconducting detectors coupled with state-of-the-art quantum-limited technologies, the development of these detectors will open up a whole new class of experiments to target the elusive axion.

This project aims to find new ways to simulate fundamental theories of nature, such as the strong nuclear force, on a quantum computer. This is a difficult problem since the carriers of the fundamental forces, particles called gauge bosons, are typically represented by an infinite (or at least very large) set of states at a point in space, in contrast to the relatively small set of states one has available on current quantum computers. Argonne researchers will use methods inspired by quantum information science to find new representations for the gauge bosons that can reproduce the theory to high accuracy while using only a small number of states.

The primary objective of this Fermilab-led project is to combine high-energy physics simulation experience with high performance computing-based quantum computer simulations to provide an environment for executing large-scale experiments with advanced analysis capabilities. These simulations could enable the study of multi-qubit reduced-noise, long-coherence-time quantum systems (such as superconducting radio frequency (RF) cavities integrated with reduced noise sensitivity transmon qubits). The ultimate goal is to help design superconducting RF qubits with record long coherence times, which can be used in a multi-qubit quantum computer-type system.

In this proposal, Argonne and General Atomics will explore the static and dynamic properties of beryllium hydride systems on quantum computing hardware and quantum emulators by extending existing methods to include excitations, extended basis sets, time-dependent Hamiltonians, and hybrid quantum-classical methods. The goal of the project is to explore how quantum computing can help to simulate properties of materials that are important for fusion energy applications.

This MIT-led project will apply techniques for qubit readout to detectors for rare and exotic particle experiments. It takes advantage of the strong overlap between superconducting qubits and superconducting detectors, as the technology and techniques employed in rare particle searches mirror those already employed by quantum engineers in the development of quantum devices and computers. The two communities share similar challenges: scaling, increased signal sensitivity, and strict manufacturing tolerances for operations at low temperatures.

The research will integrate highly sensitive transition edge sensors developed at Argonne with low-threshold detectors and with highly sensitive quantum amplifiers. The goal is to develop a readout technology appropriate for both quantum computing and studies of dark matter and neutrinos.