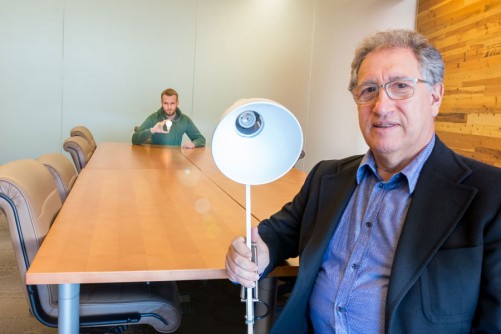 Argonne scientists Ivan Sadovskyy (left) and Valerii Vinokur published a paper showing a mathematical construction to a possible local violation of the Second Law of the Thermodynamics. One implication for the research could be a way to one day remotely power a device—that is, the energy expended to light the lamp could take place anywhere.

Newswise — For more than a century and a half of physics, the Second Law of Thermodynamics, which states that entropy always increases, has been as close to inviolable as any law we know. In this universe, chaos reigns supreme.

But researchers with the U.S. Department of Energy's (DOE's) Argonne National Laboratory announced recently that they may have discovered a little loophole in this famous maxim.

Their research, published in Nature Scientific Reports, lays out a possible avenue to a situation where the Second Law is violated on the microscopic level.

The Second Law is underpinned by what is called the H-theorem, which says that if you open a door between two rooms, one hot and one cold, they will eventually settle into lukewarm equilibrium; the hot room will never end up hotter.

But even in the twentieth century, as our knowledge of quantum mechanics advanced, we didn't fully understand the fundamental physical origins of the H-theorem.

"What we did was formulate how these beautiful abstract mathematical theories could be connected to our crude reality," said Valerii Vinokur, an Argonne Distinguished Fellow and corresponding author on the study.

The scientists took quantum information theory, which is based on abstract mathematical systems, and applied it to condensed matter physics, a well-explored field with many known laws and experiments.

"This allowed us to formulate the quantum H-theorem as it related to things that could be physically observed," said Ivan Sadovskyy, a joint appointee with Argonne's Materials Science Division and the Computation Institute and another author on the paper. "It establishes a connection between well-documented quantum physics processes and the theoretical quantum channels that make up quantum information theory."

The work predicts certain conditions under which the H-theorem might be violated and entropy — in the short term — might actually decrease.

As far back as 1867, physicist James Clerk Maxwell described a hypothetical way to violate the Second Law: if a small theoretical being sat at the door between the hot and cold rooms and only let through particles traveling at a certain speed. This theoretical imp is called "Maxwell's demon."

"Although the violation is only on the local scale, the implications are far-reaching," Vinokur said. "This provides us a platform for the practical realization of a quantum Maxwell's demon, which could make possible a local quantum perpetual motion machine."

For example, he said, the principle could be designed into a "refrigerator" which could be cooled remotely — that is, the energy expended to cool it could take place anywhere.

The authors are planning to work closely with a team of experimentalists to design a proof-of-concept system, they said.

The study was supported by the U.S. Department of Energy's Office of Science, the Swiss National Foundation, the Pauli Center for Theoretical Studies at ETH Zurich and the Russian Foundation for Basic Research.