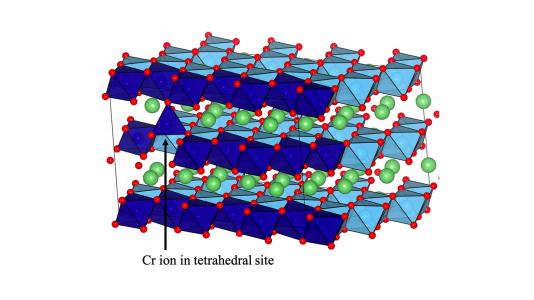 Newswise — Next-generation batteries using lithium-rich materials could be more sustainable and cost-effective, according to a team of researchers with the U.S. Department of Energy’s (DOE) Argonne National Laboratory.

The pivotal discovery, which aims to improve the understanding of advanced materials for transportation and grid storage, was published in the article, ​“Harbinger of hysteresis in lithium-rich oxides: Anionic activity or defect chemistry of cation migration,” on June 24 in the Journal of Power Sources.

“Lithium-rich oxides offer the possibility of more sustainable and cost-effective options over many current technologies as they can be made predominantly of Earth-abundant elements, with manganese being the most promising candidate,” said Jason R. Croy, a physicist in Argonne’s Chemical Sciences and Engineering (CSE) division.

Lithium-ion batteries rely on the movement of lithium between electrodes (cathode and anode) when charging and discharging. Moving more lithium, initially contained in and supplied by the cathode, amounts to more generated current available to power devices, such as phones, computers and cars. A promising class of cathode materials, known as lithium-rich oxides, includes materials that contain substantially more lithium than currently used oxides. In addition, they are composed of high amounts of Earth-abundant elements, such as manganese.

“Lithium-rich oxides offer the possibility of more sustainable and cost-effective options over many current technologies as they can be made predominantly of Earth-abundant elements, with manganese being the most promising candidate.” — Jason R. Croy, physicist, Chemical Sciences and Engineering division, Argonne.

The complex way that elements arrange themselves at the atomic level in these oxides, including lithium, manganese, titanium, oxygen and fluorine, leads to unique processes when a battery operates. Most notable is the participation of oxygen in helping to generate current, a process that does not occur in traditional lithium-ion batteries, but is one of the main reasons why lithium-rich oxides can utilize larger amounts of lithium. One drawback of these cathodes is the appearance of an energy inefficiency, or ​“hysteresis,” between charge and discharge. This means, specifically, the amount of energy needed to charge the battery is more than the energy obtained on discharge.

Until now, the research community has generally accepted that the participation of oxygen is responsible for this inefficiency, and efforts to improve these materials have focused on oxygen. While these efforts have led to advances in the design of better materials, hysteresis persists in all such oxides.

To advance our understanding of hysteresis and gain insights on other mechanisms that play an important role, the researchers designed an experiment based on a model, lithium-rich oxide. This material is a model because it contains substantial amounts of lithium and displays a hysteresis between charge and discharge; however, oxygen does not participate in the charge/discharge processes of the cell. Through the design of this system, along with theoretical calculations and measurements of working cells, the team showed that the movement of elements, in this case titanium and chromium, between certain sites within the oxide was the sole cause of hysteresis in this material — not the processes directly involving oxygen. This is important because all lithium-rich materials form similar atomic-level configurations, and regardless of oxygen’s participation in the charge/discharge processes, the movement of other elements within the materials, like what is found in this study, can also occur.

The researchers hope the findings will attract attention to these types of mechanisms and generate new insights, ideas and designs for advancing these materials toward practical use.

The researchers are part of a DOE consortium consisting of five national laboratories working on the development of next-generation cathode oxides, an important component of the applied battery research and development program managed by DOE’s Office of Energy Efficiency and Renewable Energy Vehicle Technologies Office (VTO). DOE and VTO are committed to the development of cobalt-free and other sustainable energy storage materials. Lithium-rich oxides provide an avenue to attain high-energy, cost-effective, cobalt-free oxides.

“Working on this project allowed us to design a modeling experiment to address the specific fundamental question of oxygen redox in a model system,” said Hakim Iddir, a physicist in CSE.

Working at Sector 20 at the Advanced Photon Source (APS), a DOE Office of Science User Facility at Argonne, Mahalingam Balasubramanian, a physicist at the APS, and Croy verified the initial hypothesis concerning the migration tendency of some metal atoms and confirmed the theoretical predictions.

“This work was a true collaboration between theory and experimental groups, and this joint effort was critical to verify our initial hypothesis,” said Balasubramanian.

Steve Trask, an engineering specialist at the Cell Analysis, Modeling and Prototyping (CAMP) Facility, worked with the team to design and build cells that could be probed by X-rays in a working cell.

“The CAMP Facility was critical in the design and fabrication of cells tailored to this study,” said Croy. ​“The range of X-ray energies used, along with electrode thickness and cell designs that enable practical electrochemical operation, all had to be taken into account.”

This project was funded by VTO. Sector 20 operations are supported by DOE’s Office of Science and the Canadian Light Source.