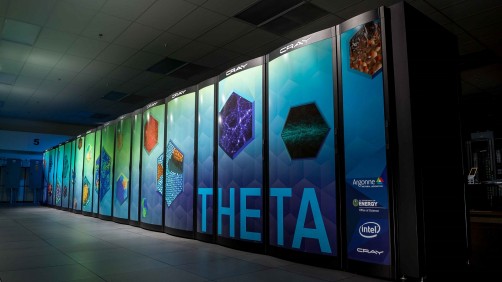 The U.S. Department of Energy’s (DOE) Argonne National Laboratory has been recognized with three awards from HPCwire, a leading website covering the high performance computing industry. The awards were announced Nov. 14 at SC22, the annual supercomputing conference in Dallas, Texas.

The awards recognize Argonne’s leadership in high performance computing, including collaborations with industry. Today’s scientific advances often depend on the ability to solve large complex problems relatively quickly with powerful computers and algorithms. Argonne has been using high performance computing for goals ranging from more efficient engines to exploring the cosmos.

“These awards recognize projects that are quite distinct in their own ways, but they share a common theme: collaboration.” — Rick Stevens, Argonne associate laboratory director for the Computing, Environment and Life Sciences division and an Argonne Distinguished Fellow

The research aims to make data science more easily reproducible through a set of principles known as FAIR: findable, accessible, interoperable and reusable. The team included scientists from Argonne, The University of Chicago, National Center for Supercomputing Applications and University of Illinois at Urbana-Champaign. They created a computational framework that enables artificial intelligence models to run seamlessly across various types of hardware and software platforms and yield the same results.

The research was funded by DOE’s Office of Advanced Scientific Computing Research, the National Institute of Standards and Technology, the National Science Foundation and Argonne Laboratory Directed Research and Development grants. To perform the computations, the team used the ALCF AI Testbed’s SambaNova system and the Theta supercomputer’s NVIDIA graphics processing units. The data for the study was acquired at the Advanced Photon Source, also a DOE Office of Science user facility.

Collaborating with industry for real-world solutions

Argonne received another Readers’ Choice Award in the Best Use of HPC in Industry (Automotive, Aerospace, Manufacturing, Chemical) category. Together with the Raytheon Technologies Research Center, Argonne developed machine learning models for designing and optimizing high-efficiency gas turbines in aircraft. The machine learning models were trained on computational fluid dynamics (CFD) simulations of gas turbine film cooling performed on DOE supercomputers. CFD simulations approximate how fluids like air or fuel move, and they are key to enhancing efficiency in machines of all kinds. The researchers’ framework can extend fuel efficiency and durability of aircraft engines while slashing design times and costs. The work is funded by DOE’s Advanced Manufacturing Office via the HPC4EnergyInnovation program.

“These awards recognize projects that are quite distinct in their own ways, but they share a common theme: collaboration,” said Rick Stevens, Argonne associate laboratory director for the Computing, Environment and Life Sciences division and an Argonne Distinguished Fellow. ​“We are pushing to move scientific insights from supercomputing into real-world solutions.”