ARM Data Is for the Birds 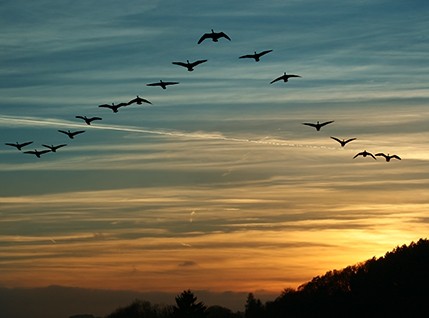 Scientists used wind measurements and bird distribution data to study how the animals make optimal use of available atmospheric conditions.

Birds are well attuned to weather and climate conditions, migrating south to warmer climates in the autumn and back north to their breeding grounds in the spring. Their aerial movements are influenced by atmospheric flows. Recently, scientists looked at how a large-scale atmospheric motion called the Great Plains Low-Level Jet impacts this behavior. The jet flows across the central United States. It consists of enhanced winds in the lowest few kilometers of the atmosphere following sunset. The winds persist into early morning. The jet produces tailwinds during spring as birds head north, but strong headwinds during autumn when they are heading south. It is not clear whether birds adjust their flight patterns to take advantage of the tailwinds or to avoid the headwinds. Using data from the U.S. Department of Energy’s Atmospheric Radiation Measurement (ARM) Climate Research Facility site in Oklahoma, scientists showed how birds and other aerial migrants exploit the jet for maximal wind assistance.

Scientists suspected that the low-level jet plays a prominent role in defining migratory routes, but the flight strategies birds use with respect to these winds had not been examined. Understanding bird migration patterns is important for aviation safety and minimizing the impact of wind power development on birds. An investigation over Oklahoma during two spring and two autumn migration seasons shed light on the flight strategies. The scientists found that in general migrating organisms choose to fly within the jet in spring, often concentrating in the favorable wind speed maximum. In autumn, most typically fly below the jet. However, some aerial migrants will rapidly climb to reach altitudes above the inhibiting winds. The migration intensity was relatively constant throughout the spring due to predominantly favorable southerly jet winds. Conversely, autumn migrants were more apt to delay departure to wait for the relatively infrequent northerly winds.

The ARM Southern Great Plains site in Oklahoma is located in the “central flyway," one of the three main North American routes for seasonal bird migrations. The Great Plains Low-Level Jet is a prominent atmospheric flow spanning the latitudinal extent of the central United States from Mexico to Canada. This rapid stream of meridional winds has likely played a lasting role in nocturnal migration across the central United States. To explore interactions between the low-level jet and migrating birds, two independent data streams were needed: wind measurements and animal distributions. Wind retrievals from Doppler LIDAR are generally unaffected by scattering from birds or insects, yielding true atmospheric motions. While designed for measuring cloud particles, the Ka-band ARM zenith radar (KAZR) also observes scattering signals from flying organisms such as birds, bats, and insects. The team used KAZR radar reflectivity below 2 km as a proxy for animal density. Because the specifications of the radar were designed for clouds, not birds, definitely delineating between birds and insects in the signal was not possible, so the study refers to these organisms generally as “migrants” although birds likely dominate the signal (due to their much larger scattering cross section). In this study, scientists combined the ARM Doppler LIDAR and KAZR measurements over two years to examine whether the low-level jet influences the choice of migration flight altitude. In particular, the team examined whether the seasonal shift in migration direction results in seasonal differences in altitude selection; whether the nightly variability in jet speed, direction, and altitude affect the overall abundance of migrating organisms in the airspace; and whether there are seasonal differences in migratory decision making with respect to low-level jet conditions. The scientists found that the altitude at which migrants choose to fly does appear to depend on the presence, height, and favorability of low-level jet winds. Specifically, seasonally favorable jets promote enhanced migration activity through the depth of the favorable wind layers. Unfavorable jets motivated avoidance behaviors such as flying at an altitude that minimizes the impact of the southerly jet winds or delaying migration until conditions that are more favorable occur. Overall, the results suggest that aerial migrants in the U.S. Great Plains region exploit the low-level jet for maximal wind assistance.

The LIDAR and Ka-band radar data were obtained from the Atmospheric Radiation Measurement (ARM) Climate Research Facility, a U.S. Department of Energy Office of Science user facility sponsored by the Office of Biological and Environmental Research. This work was partially supported by National Science Foundation grant EF-1340921.