A novel approach to design and assembly of nanotextured surfaces on photovoltaic devices could improve energy collection. 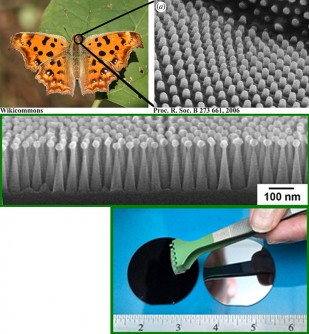 Image courtesy of the Center for Functional Nanomaterials, BNL

Mimicking the texture found on the highly antireflective surfaces of the compound eyes of moths, scientists from the Center for Functional Nanomaterials at Brookhaven National Laboratory have utilized block copolymer self-assembly to produce precise and tunable nanotextured designs in the range of ~20 nm across macroscopic silicon-based solar cells. The nanoscale texturing that was fabricated from the topmost silicon surface imparted broadband antireflection properties, which significantly enhanced the light-harvesting and, hence, overall performance of the solar cell compared to those with typical antireflection coatings.

A block-copolymer-based approach to surface texturing has yielded highly reproducible, well-organized surfaces that reduce reflections from silicon solar cell surfaces, down to less than 1% across entire visible and near infrared spectrum, and across a wide range of incident light angles. Further, block-copolymer based approaches are wholly scalable for the manufacture of large-area photovoltaic devices, with great potential for facile implementation into silicon-based, silicon nitride-based, and glass-based architectures, among other materials.

Using block copolymer self-assembly, CFN scientists have mimicked the texture found on the highly antireflective surfaces of the compound eyes of moths and produced precise and tunable nanotextured designs in the range of ~20 nm across macroscopic silicon solar cells. The nanoscale texturing imparts broadband antireflection properties to the solar cells and significantly enhances their performance compared with typical antireflection coatings. Proper design of an antireflection coating involves managing the refractive index mismatch at an abrupt optical interface. The most straightforward approach introduces a single layer of an intermediate optical index atop of a surface to create a system that engenders destructive interference in reflected light. This usually provides full antireflection at only a single wavelength. Increasingly, broadband coverage, for transparent window coatings, military camouflage or solar cells, among other applications, is possible using multilayered thin-film schemes. As an alternative approach, nanoscale patterns imposed to the surface of a material, can create an effective graded index-of-refraction medium between the surface and air. Such patterns provide broadband antireflection over a wide range of incident light angles when nanoscale, sub-wavelength textures are sufficiently tall and closely spaced. In the CFN work, the broadband antireflection properties of a nanofabricated moth eye structure are enhanced through simultaneous control of both the geometry and optical properties, using block copolymer self-assembly to design nanotextures that are sufficiently small to take advantage of a beneficial material surface layer that is only a few nanometers thick.

Research was carried out at the Center for Functional Nanomaterials, Brookhaven National Laboratory, which is supported by the U.S. Department of Energy, Office of Basic Energy Sciences, under contract no. DE-SC0012704.

This is CFN staff research supported by BES SUFD and also BNL. No other BES Division supports this. This is Brookhaven's Prime Contract which is the contract between the U.S. Department of Energy and Brookhaven Science Associates that sets out the terms and conditions for the operation of Brookhaven National Laboratory.