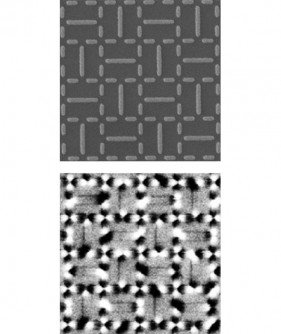 Newswise — For the first time, nanomagnet islands or arrays were arranged into an exotic structure (called “shakti”) that does not directly relate to any known natural material. The shakti artificial spin ice configuration was fabricated and reproduced experimentally. The arrays are theoretical predictions of multiple, or degenerate, ground states that are characteristic of complex frustrated magnetic materials.

Complex nanomagnet arrays with exotic geometries can be designed and fabricated to exhibit desired physical phenomena and subtle effects. The results open the door to experiments on other artificial spin-ice lattices, predicted to host interesting phenomena. The phenomena are associated with the design of the exotic lattice structures where the topology governs the physics and properties of the material.

Artificial spin ice is a class of lithographically created arrays of interacting ferromagnetic nanometer-scale islands. Researchers created artificial spin ice as a means to investigate complex magnetism and the related physics in a material that could be tailored to precise specifications and imaged directly. Because of the large magnetic energy scales of these nanoscale islands, a special, newly developed thermal treatment is required to achieve the magnetic ground state. In this research, iron-nickel nanomagnets were fabricated in shakti arrays, a structure with 2, 3, and 4 nanomagnet islands meeting in periodic arrays (resulting in vertexes with 2, 3, and 4 coordination numbers). Then, the structure underwent a thermal treatment by heating it above the Curie temperature (the temperature at which the nanomagnets become magnetic). In this manner, the artificial spin ice achieved unprecedented thermal ground state ordering of the magnetic moments. In these investigations, the shakti spin ice lattices were used to experimentally confirm the ground states of the lattice predicted by Monte Carlo simulations and to study the dynamics and charge screening effects for the system.

DOE Office of Science, Basic Energy Sciences program. Lithography was performed in part with the support of the National Science Foundation National Nanotechnology Infrastructure Network. Work performed at the University of Minnesota was supported by the European Union Marie Curie International Outgoing Fellowships.