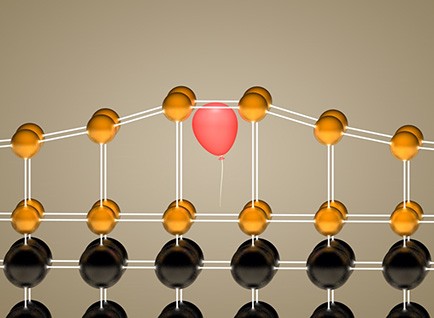 With just a bit of helium, the lighter-than-air element that makes balloons float, scientists have done what was once thought impossible—they stretched a crystal lattice in just one dimension, allowing them to tune the structure’s electronic and magnetic properties. To achieve this elongation, scientists devised a new method called "strain doping." Scientists implant helium ions into a crystal. The helium gently pushes up against the structure, like a balloon under a sheet. The process does not cause structural damage.

“Strain doping” could let scientists tune the electronic and magnetic properties of complex materials creating what’s needed to advance transmitting, storing, and otherwise working with electricity. These new types of materials could transmit electricity without loss. Also, this technique brings complex oxide materials closer to commercialization because it can be scaled up for wafer-scale processing and uses existing infrastructure in the semiconductor industry—leveraging this multi-billion industry with existing fabrication facilities including clean rooms to eliminate dust and specialized machines. Commercializing complex oxides is important because they exhibit exciting phenomena that can address limitations in solar cells, thermoelectrics (conversion of waste heat to electricity), and energy conversion, transmission, and storage. In addition, this technique lets scientists controllably vary one parameter in a material, allowing them to experimentally investigate theoretical predictions of promising properties in different materials.

Scientists believed that changing only one dimension of the crystal lattice structure was impossible. Now researchers led by scientists from Oak Ridge National Laboratory have controllably elongated one direction of a crystalline lattice, using a technique called "strain doping." In this technique, scientists implant a helium ion to achieve a level of structural control previously only available to theory. The team implanted a few helium ions into a crystalline thin film and stretched the structure of the crystal film in one direction, while the other two directions were fixed by an underlying substrate. The crystalline film was a complex oxide with electronic properties that are very sensitive to stretching and pulling. The research shows that implanting the helium atoms into the crystalline lattice lets scientists control the strain in the film, thereby tuning the magnetic and electronic properties of the oxide film, and is reversible by removing the helium. Scientists could use this strain doping technique to tune electronic and magnetic properties of other materials. Because this technique uses existing ion implantation infrastructure currently found in the semiconductor industry, it could accelerate the commercial use of complex oxides with finely controlled properties. The research also shows that the elusive goal of experimentally probing theoretical models of materials’ properties by varying one parameter at a time may now be a reality.

This work was supported by the U.S. Department of Energy (DOE) Office of Science, Office of Basic Energy Sciences (Oak Ridge National Laboratory and University of Tennessee-Knoxville); the Center for Nanophase Materials Science (helium implant preparations and magnetization measurements), a DOE Office of Science User Facility; National Science Foundation of China (partial support for theoretical calculations); and the University of Tennessee.