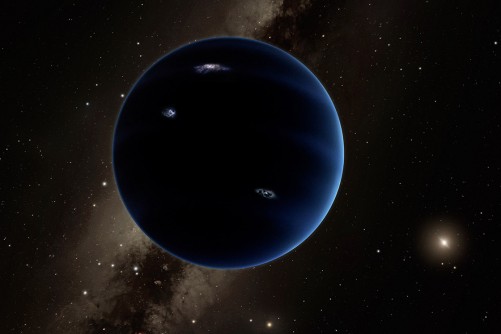 The public is invited to participate in the hunt for a hypothetical Neptune-like ninth planet in our solar system, dubbed Planet Nine. This image shows an artist’s concept of Planet Nine, with a view toward the sun.

An artist’s conception of three types of brown dwarfs. 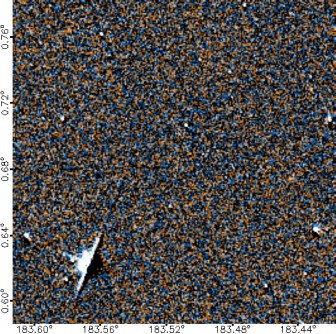 An example of a large dipole object (at lower left) spotted by a Backyard Worlds participant.

Citizen scientists are asked to identify dipoles, which are black-and-white objects that seem to flip flop from frame to frame, and "movers," which are objects that appear to move in a line, changing position in each frame. This animation shows sample frames for both types of these objects of interest.

The orbit of a possible ninth planet in our solar system is shown in brown.

Newswise — The pursuit of Planet Nine -- a hypothesized Neptune-like giant that some scientists believe may be cruising along a remote orbit in our solar system -- can now go door-to-door.

A new NASA-launched citizen science project is looking for the public’s help in reviewing more than a million animations to identify moving space objects that could be new discoveries. The effort benefited from data research on a cosmology project led by the Department of Energy’s Lawrence Berkeley National Laboratory (Berkeley Lab).

Each animation in this “Backyard Worlds: Planet 9” project, launched Feb. 15, is composed of four infrared images taken of the same patch of sky over the course of the past five years by NASA’s WISE (Wide-field Infrared Survey Explorer) space telescope.

Aaron Meisner, a UC Berkeley physics postdoctoral researcher who works on DESI (Dark Energy Spectroscopic Instrument), a sky-mapping project led by the Berkeley Lab, said his research earned him a spot on the Backyard Worlds team.

“It turns out that the WISE data that I was adapting for DESI is really good for looking for moving objects,” such as brown dwarfs, said Meisner. “We wouldn’t have all of this WISE data available in this form if it wasn’t for DESI,” he added.

Brown dwarfs can be tens of times more massive than Jupiter but aren’t capable of carrying out the same type of nuclear fusion as stars.

Marc Kuchner, the Backyard Worlds project creator and an astrophysicist at NASA Goddard Space Flight Center, said, “More than a million of these ‘rogue worlds’ are swarming the galaxy. There may well be a brown dwarf located near the sun that we can find with this project.”

Kuchner reached out to Meisner when he learned of his work with the WISE data. Meisner has been developing algorithms tapping Berkeley Lab’s NERSC (National Energy Research Scientific Computing Center) to help parse and reprocess the giant load of data produced by WISE and make it more useful to DESI. UC Berkeley researchers are also using NERSC to sift through data collected by a San Diego-area telescope for signs of Planet Nine.

Kuchner has also led a citizen science project called Disk Detective that allows users to scan WISE images for debris disks that could provide clues to planetary formation. He was a graduate student of Mike Brown, an astronomer at the California Institute of Technology who helped build up the scientific case for the existence of Planet Nine.

In his DESI-related research, Meisner helps to ensure that the WISE images are useful for selecting sky objects that DESI can fix on when it begins operating in 2019. Data from a set of Earth-based, visible-light sky surveys will also be used to identify millions of candidate galaxies and quasars for DESI.

Meisner last year embarked on a pet project to conduct automated searches for Planet Nine within the WISE data. But computerized searches can be greatly compromised by false detections caused by a small amount of light scattering in the telescope’s camera -- particularly when there are bright stars or densely packed stars in the image.

“One of the hardest areas for both automated and citizen science approaches is in the plane of the Milky Way galaxy because there are so many stars,” Meisner said. “We don’t want to leave out any part of the sky, and that is one of the key motivations and advantages for showing the volunteers everything.”

The current plan for the Backyard Worlds project is to have each of the 1.2 million animations in the project’s first batch of data reviewed at least 15 times, for a total of 18 million classifications. This helps increase the possibility that moving objects that slip past some of the volunteers may be spotted by others.

In the first week, Backyard Worlds drew about 1.7 million total classifications from about 20,000 volunteers.

“The response has been so wonderful that we’re having trouble keeping up,” Kuchner said. “The volunteers are churning through the data as fast as I can upload it.”

Volunteers are asked to click to place markers in every frame for those objects that clearly flip-flop between black-and-white states between frames (referred to as “dipoles”), and those that seem to be moving across the frame (“movers”).

Volunteers are also invited to review a couple of online catalogs of space objects to check whether what they find is something new or something known, and to make notations for what they learn.

Members of the Backyard Worlds team participate in online discussion groups at its Web home on Zooniverse to help keep up with volunteers’ queries.

The team is working out plans on how to best mine all of the user-generated information that is already pouring in, Meisner said, and he plans to assist in developing some algorithms to call out the most promising finds by volunteers.

There is plenty of additional WISE data available to feed to the growing community of Backyard Worlds volunteers, too, he said.

The early data analyses of the volunteers’ classifications has begun, Meisner added, and already the data appear to contain intriguing examples of pairs of nearby stars that trail across the animations at about the same speed and direction.

Little is known about how Planet Nine might appear in the WISE animations, or if it would appear at all, and that’s part of the excitement surrounding Backyard Worlds, Meisner said. The discovery of nearby brown dwarfs would be a big win for the project, even without the unearthing of a new planet.

“While we may not discover Planet Nine, we’ll still have the fun of finding new objects,” he said.

NERSC is a DOE Office of Science User Facility. 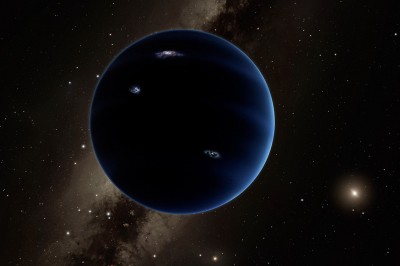 Caption: The public is invited to participate in the hunt for a hypothetical Neptune-like ninth planet in our solar system, dubbed Planet Nine. This image shows an artist’s concept of Planet Nine, with a view toward the sun.

Caption: An artist’s conception of three types of brown dwarfs. 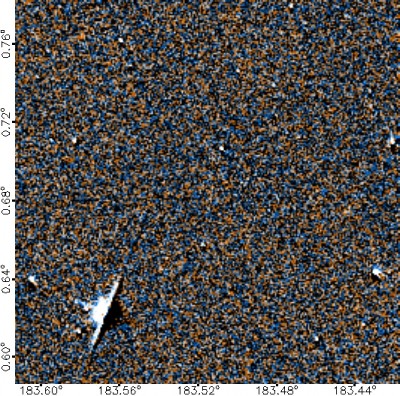 Caption: An example of a large dipole object (at lower left) spotted by a Backyard Worlds participant.

Caption: Citizen scientists are asked to identify dipoles, which are black-and-white objects that seem to flip flop from frame to frame, and "movers," which are objects that appear to move in a line, changing position in each frame. This animation shows sample frames for both types of these objects of interest.

Caption: The orbit of a possible ninth planet in our solar system is shown in brown.