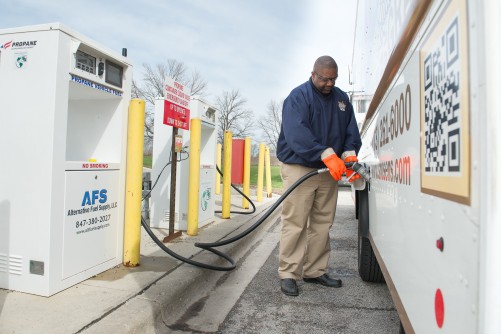 Newswise — A switch to propane from diesel by a major Midwest bakery fleet showed promising results, including a significant displacement of petroleum, a drop in greenhouse gases and a fuel cost savings of seven cents per mile, according to a study recently completed by the U.S. Department of Energy’s (DOE) Argonne National Laboratory. The work was carried out under the auspices of the DOE’s Clean Cities initiative. The program, overseen by the DOE’s Office of Energy Efficiency & Renewable Energy, began in 1993 with the goal of cutting petroleum use in transportation. It has helped save 7.5 billion gallons of oil so far.

The Alpha Baking Company replaced 22 of its 300 diesel trucks with propane vehicles in 2013. The Chicago-based company, the third largest of its kind in the U.S., employs 1,400 people and distributes goods to restaurants, grocery-store chains and other customers through 16 depots in Illinois, Indiana, Wisconsin and Michigan.

Alpha Baking Company had been searching for an alternative fuel for nearly a decade, and has considered not only propane but natural gas and vegetable oil, said Bob McGuire, vice president and director of logistics for the company.

“It’s the right thing to do,” said McGuire, describing the company’s quest for a fuel alternative. Not only is it beneficial to the environment, but the cost of fuel is too volatile, he said. “It’s such a great unknown as to what it’s going to be in the future.”

Propane proved particularly enticing to the company, because infrastructure costs were lower than for natural gas and it was possible to convert the trucks back to gasoline in the future for resale, if needed.

Analysis from Argonne’s Alternative Fuel Life-Cycle Environmental and Economic Transportation (AFLEET) Tool showed that the propane trucks had lower fuel economy than the diesel vans but provided notable petroleum displacement and greenhouse gas emission reductions. "Total petroleum displacement was about 38,000 diesel gallon equivalent per year and the greenhouse gas emission reduction was roughly 80 tons annually,” according to Andy Burnham, an environmental scientist at Argonne. "The findings were very encouraging. Propane trucks work well for the baking industry, and their use led to significant petroleum displacement.”

The incremental costs of the propane step vans and the infrastructure needed to support them can be recouped in four to seven years, the study found. In addition, lower fuel prices and a reduction in maintenance costs for propane vans will continue the cost savings long after the capital costs for the vans and fueling stations are recouped.

Fuel economy was 10 miles per gallon for the diesel engines and 8.6 miles per diesel gallon equivalent for the propane vans.

The seven cent per mile cost savings resulted from several factors, including the miles traveled for the propane and diesel vehicles, the vehicles' fuel economy and the relative fuel costs of propane and diesel. For the propane vehicles, the average miles traveled per vehicle was slightly higher, the average fuel economy was lower, and fuel prices were lower. The net result of these three factors is the seven cent per mile fuel cost reduction.

The study found, too, that drivers enjoyed operating the high-powered vehicles, which are quieter – important for morning deliveries.

Propane vehicles are expected to become even more common for this industry in the coming years. The Alpha Baking Company is looking to expand its use to several other depots in its system: McGuire said propane is an excellent fit for vehicles that run 100-200 miles a day. Other bakeries, including Bimbo Bakeries USA and H&S Bakery, have already begun to deploy their own propane fleets. Argonne National Laboratory seeks solutions to pressing national problems in science and technology. The nation's first national laboratory, Argonne conducts leading-edge basic and applied scientific research in virtually every scientific discipline. Argonne researchers work closely with researchers from hundreds of companies, universities, and federal, state and municipal agencies to help them solve their specific problems, advance America's scientific leadership and prepare the nation for a better future. With employees from more than 60 nations, Argonne is managed by UChicago Argonne, LLC for the U.S. Department of Energy's Office of Science.The U.S. Department of Energy’s Office of Science is the single largest supporter of basic research in the physical sciences in the United States and is working to address some of the most pressing challenges of our time. For more information, visit the Office of Science website.