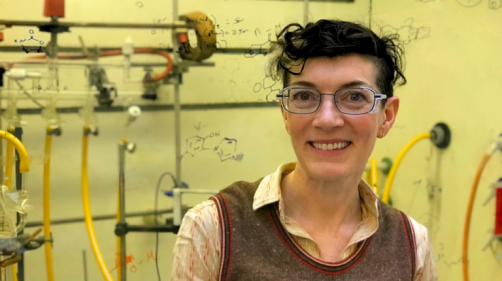 Newswise — Renowned heavy-element chemist Polly Arnold has been appointed Chemical Sciences Division Director within the Energy Sciences Area at the Department of Energy’s Lawrence Berkeley National Laboratory (Berkeley Lab). Arnold will join Berkeley Lab in late September this year. Concurrent with her role at Berkeley Lab, she will also join the Chemistry Department faculty at UC Berkeley in January 2020. The announcement follows an international search.

Arnold comes from the University of Edinburgh where she is the Crum Brown Chair of Chemistry. Her research focuses on advancing our understanding of the bonding and reactivity of heavy elements, the elements of the f-block of the periodic table.

Among her many awards and honors, Arnold is a Fellow of the Royal Society, and was awarded the 2012 Rosalind Franklin Award and Order of the British Empire in 2017 for her outstanding contributions to chemistry and women in STEM.

“We are excited to welcome Dr. Arnold to Berkeley Lab,” said Berkeley Lab Director Mike Witherell. “She is truly a remarkable scientist whose impressive leadership in chemistry will help us sustain our world-class science. In addition, she is committed to our goal of fostering a greater culture of inclusion here at the Lab.”

"I have always been hugely impressed with the brilliance and diversity of science that is carried out here, and by the value the Lab also places on the diversity of its people,” Arnold said. “I’m looking forward to working with all my new colleagues, and on a personal note, bringing in my own research on some of the heaviest elements that were first discovered at Berkeley Lab, one of the Department of Energy’s oldest national laboratories."

With the Franklin Award, Arnold created the short film "A Chemical Imbalance" as a call to action for simple changes to achieve equality of opportunity in science. She has worked with many governments and learned societies worldwide on diversity, equity, and inclusion, and launched a support network for senior women in STEM careers in Scotland called SciSisters. In 2018, Arnold discussed her research in an episode of the BBC podcast Brainwaves.

Arnold has been a visiting lecturer in China, the United States, Germany, and France. Her group designs and produces new reactive molecules that are challenging preconceived ideas of f-block chemistry. The 4f-row, or rare earth elements, whose salts are as common as iodine and 10 times less toxic than those of iron, offer great potential for the catalytic conversions of simple inert molecules needed for a future, renewable-based chemical industry.

Controlling the chemistry of the radioactive metals of the 5f-row, the actinides, underpins the long-term, safe management of our nuclear waste legacy. Arnold combines synthetic organometallic techniques with new methodologies to control their reactivity, elicit unprecedented behaviors, and isolate molecules with previously unseen electronic structures and reactivities across the f-block.