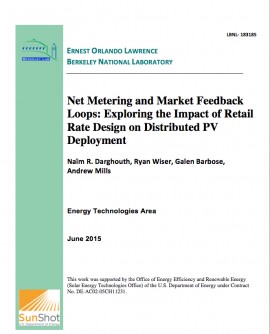 “We find that retail rate design can have a dramatic impact on PV deployment levels,” says report author Naïm Darghouth, a researcher in Berkeley Lab’s Energy Technologies Area. “For example, rate design changes currently being considered by a number of utilities, and modeled in our study, can dramatically erode aggregate customer adoption of PV (from -14% to -61%, depending on the design).”

The report, which uses a solar deployment model originally developed at the National Renewable Energy Laboratory, also examines PV deployment levels under broad adoption of time-of-use rates, purely volumetric rates, feed-in tariffs, and avoided cost-based rates. Most of these scenarios lead to deployment levels lower than under a continuation of net metering and current rate designs.

“Our study shows that—at least on a national basis—these two feedback effects largely counteract one another. As such, current discussions that focus largely on the fixed-cost recovery feedback miss an important and opposing feedback mechanism that can in many circumstances moderate the issue of concern,” notes Berkeley Lab’s Ryan Wiser, a co-author on the report.

The report was motivated by the fact that rapid growth of net-metered solar PV has provoked concerns about the financial impacts of that growth on utilities and ratepayers. To address these concerns, an increasing number of states are exploring changes to net metering rules, retail rate structures, or both. According to report co-author Galen Barbose, “Understanding the deployment impacts of potential reforms to rate design and net metering will be critical for regulators and other decision makers as they consider changes to retail rates, given the continued role of PV in advancing energy and environmental policy objectives and customer choice. This report makes a unique contribution by quantitatively assessing these possible deployment impacts.”

The report, Net Metering and Market Feedback Loops: Exploring the Impact of Retail Rate Design on Distributed PV Deployment, may be downloaded at http://emp.lbl.gov/reports/re, along with a factsheet and summary slide deck.

A webinar presentation of key findings from the report will be held today, July 9, at 11 am Pacific Time (2 pm Eastern Time). To receive log-in instructions for the webinar, register at https://goo.gl/uuLVWa.

This research was supported by funding from the U.S. Department of Energy’s SunShot Initiative.

The SunShot Initiative is a collaborative national effort that aggressively drives innovation to make solar energy fully cost-competitive with traditional energy sources before the end of the decade. Through SunShot, DOE supports efforts by private companies, universities, and national laboratories to drive down the cost of solar electricity to $0.06 per kilowatt-hour. Learn more at energy.gov/sunshot.