Berkelium's Unexpected Chemistry Has Been Captured 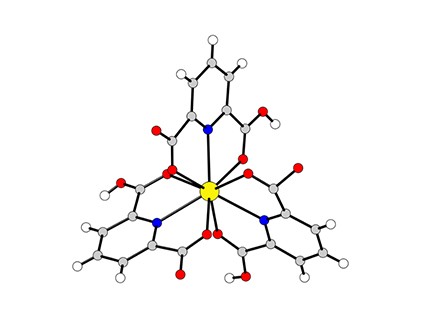 A view of the structure of a berkelium(III) coordination complex characterized using single crystal x-ray diffraction. Berkelium is illustrated as the yellow atom in the center of the complex.

Berkelium is one of the few elements that has yet to be characterized in detail, largely because the only available isotope, 249Bk, has a half-life of only 320 days. Using single crystal x-ray diffraction, researchers at Florida State University structurally characterized a complex containing the actinide-group element berkelium. The characterization reveals unexpected findings, such as a lack of structural similarities between berkelium and its lanthanide analog terbium.

Understanding how the Periodic Table evolves is a key part of elucidating how electronic structure is altered as elements become heavier and there are more and more electrons. It is commonplace to use nonradioactive lanthanides as replacements for actinides because of the challenges of working with radioactive isotopes. However, the findings from this work, in which both the physical properties and electronic structure of berkelium were not anticipated, indicate that a lanthanide element is a poor choice for a berkelium surrogate. This study also represents the first structural characterization of berkelium compounds in the history of humankind.

Scientists often use the Periodic Table to predict the properties of an element based on certain trends. For example, elements in the same column of the table, also known as a group, typically have similar electronic properties. However, these trends do not always hold true. The chemistry of heavy elements can diverge significantly from predictions based on periodic trends; this is due in part to the electrons being accelerated to a significant fraction of the speed of light in the heaviest elements, which in turn causes electron orbit perturbation due to their relativistically increased mass. When investigating elements in the lanthanide series, a nonradioactive analog from the actinide series is often desirable due to radioactive safety precautions and longer stability. Terbium represents the closest analog of berkelium, a previously uncharacterized lanthanide element, because both share a group on the Periodic Table. However, based on recent findings by a group of researchers from Florida State University, berkelium and terbium may not share similar physical or electronic properties. The electronic properties of these elements were illustrated by their distinctly different ligand binding. These results indicate berkelium possesses structural chemistry that resembles californium, while its electronic structure is more similar to curium and other earlier actinides. This discovery provides important information regarding one of the last uncharacterized elements of the actinide series and increases our knowledge of periodic trends, particularly those relating to the heavy elements.

This work was supported by the U.S. Department of Energy, Office of Science, Office of Basic Energy Sciences, Division of Chemical Sciences, Geosciences, and Biosciences under award no. DE-FG02-13ER16414 (Florida State University), DE-SC0012039 (Colorado School of Mines), and DE-SC0001136 (formerly DE-FG02-09ER16066, for F.G. and J.A.). M.S. and P.K. were supported by the European Research Council StG 308051 MOLSPINTRON. The isotopes used in this research were supplied by the U.S. Department of Energy, Office of Science, Isotope Program in the Office of Nuclear Physics. The 249Bk was provided to Florida State University and the Colorado School of Mines via the Isotope Development and Production for Research and Applications Program through the Radiochemical Engineering and Development Center at Oak Ridge National Laboratory. Magnetization measurements using the vibrating sample magnetometer SQUIDmagnetic properties measurement system were performed at the National High Magnetic Field Laboratory, which is supported by National Science Foundation Cooperative Agreement no. DMR-1157490, the State of Florida, and the U.S. Department of Energy. J.C.W. is supported by the National Science Foundation Graduate Research Fellowship under grant no. DGE-1449440. This research was supported in part by an appointment to the Carlsbad Field Office Fellowship Program, sponsored by the U.S. Department of Energy and administered by the Oak Ridge Institute for Science and Education.