Best Precision Yet for Neutrino Measurements at Daya Bay

By tracking the transformation of neutrinos, scientists hope to answer fundamental physics questions 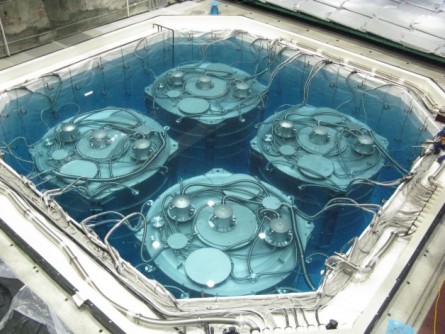 Antineutrino detectors installed in the far hall of the Daya Bay experiment.

Newswise — In the Daya Bay region of China, about 55 kilometers northeast of Hong Kong, a research project is underway to study ghostlike, elusive particles called neutrinos. Today, the international Daya Bay Collaboration announces new findings on the measurements of neutrinos, paving the way forward for further neutrino research, and confirming that the Daya Bay neutrino experiment continues to be one to watch.

The latest findings involve measurements that track the way neutrinos change types or flavors, as they move, a characteristic called neutrino oscillation. By measuring neutrino oscillation, the researchers are homing in on two key neutrino properties: their “mixing angle” and “mass splitting.”

Measurements of these properties by the Daya Bay Collaboration, which includes more than 200 scientists from seven regions and countries, are the most precise to date, and are an improvement of about a factor of two over previous measurements published early in 2014. The new results are published in Physical Review Letters.

“We have now moved from the discovery era to the precision measurement era,” says Kam-Biu Luk, faculty senior scientist at the Lawrence Berkeley National Laboratory (Berkeley Lab), physics professor of the University of California at Berkeley, and the Daya Bay Collaboration co-spokesperson.

It’s important to measure the mixing angle and mass splitting parameters as precisely as possible, Luk says, because neutrino behavior could hold the key to understanding the asymmetry between matter and antimatter in the universe. This asymmetry, known as the charge-parity or CP violation, explains why shortly after the Big Bang, when most matter and antimatter annihilated each other, some matter was left over to make up the universe we see today.

The Fluctuating NeutrinoThe behavior of neutrinos is unlike any other fundamental particle: they seem to disappear, reappear, and transform themselves as they travel, unimpeded, from sources like the sun and other stars, through space, planets, and even our own bodies.

Neutrinos come in three flavors—electron, muon, and tau. And as a neutrino travels, thanks to quantum mechanical fluctuations, it oscillates between flavors. That is, a particle that starts out as an electron neutrino might at some point turn into a tau neutrino. Then at another point it will present itself more like it did in the beginning. As time goes by, these transformations happen again and again, with the oscillation having a particular amplitude and frequency—similar to sound and light waves.

The Neutrino NetTo study neutrino oscillations, the Daya Bay Collaboration has immersed eight detectors in three large underground pools of water. These detectors sit at different distances from the six China General Nuclear Power Group reactors in Daya Bay. The reactors emit steady streams of electron antineutrinos, which for purposes of the experiment are essentially the same as electron neutrinos. The detectors pick up the transformations that occur as these millions of quadrillions of electron antineutrinos travel farther away from their origin in the reactors.

Based on the data collected over 217 days with six of the Daya Bay detectors and 404 days using all eight of the Daya Bay detectors, the research team has determined the value for a specific mixing angle, called theta13 (pronounced theta-one-three), to a precision two times better than previous results. Similar improvement was made in the precision of measuring the mass splitting.

“Because we have so much data and our detectors are performing very well, we’ve now reached precision measurements that will have implications for future neutrino experiments,” says Hin-Lok Henoch Wong, a graduate student of the University of California at Berkeley who played a key role in these measurements. He adds that these measurements support the three-neutrino model, which describes physicists’ best thinking about the three types of neutrinos.

The Daya Bay Collaboration continues to take data. At the end of 2017 it will have roughly four times more data to further improve precision for both mixing angle of theta13 and corresponding mass splitting. By then, all three mixing angles, including theta12 and theta23, and mass splittings may be determined to comparable precisions, better than three percent.

The unprecedented precision of the data set allows for many other studies. The team is looking for evidence of a possible “sterile” neutrino, a hypothetical type that may mix with the three known neutrino flavors. If this sterile neutrino shows itself in the data, scientists will need to rethink the three-neutrino model . In addition, the record-breaking data sample is ideal for finding new physics beyond what is known.

“The Daya Bay experiment is looking at neutrinos to provide a better understanding of fundamental physics,” says Yasuhiro Nakajima, a Chamberlain fellow of the Physics Division.

This work was supported by the DOE Office of Science (Office of High Energy Physics).

# # #Lawrence Berkeley National Laboratory addresses the world’s most urgent scientific challenges by advancing sustainable energy, protecting human health, creating new materials, and revealing the origin and fate of the universe. Founded in 1931, Berkeley Lab’s scientific expertise has been recognized with 13 Nobel prizes. The University of California manages Berkeley Lab for the U.S. Department of Energy’s Office of Science. For more, visit www.lbl.gov. 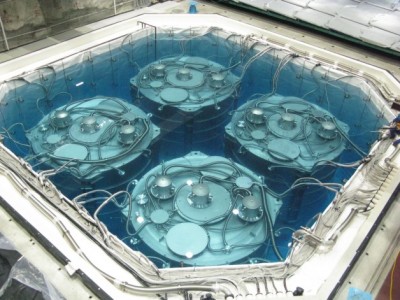 Caption: Antineutrino detectors installed in the far hall of the Daya Bay experiment.