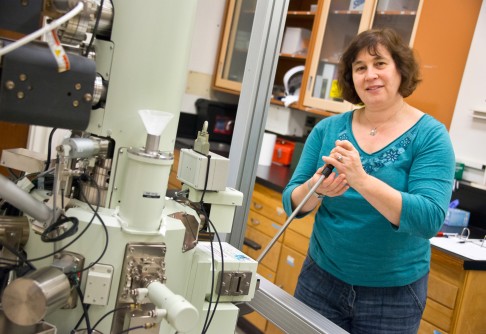 Berkeley Lab battery scientist Marca Doeff, in the lab with a scanning electron microscope, is working with a researcher from VW through CalCharge.

Newswise — The Lawrence Berkeley National Laboratory (Berkeley Lab) is known for having some of the world’s leading battery scientists. This Department of Energy lab also has highly specialized equipment that very few companies would choose to invest in. Sounds like the sort of place an automaker or electronics company or battery startup might love to tap into. However, until recently, it was often difficult for private industry to take advantage of Berkeley Lab’s resources.

That has changed with CalCharge, a unique public-private partnership uniting the California Bay Area’s emerging and established battery technology companies with critical academic and government resources. It allows member companies to easily set up research projects with Berkeley Lab scientists or use its facilities for materials testing or other technology development.

“Through these CalCharge collaborations we’ll be able to push new battery technology out the door much faster,” said Venkat Srinivasan, a Berkeley Lab battery scientist who was one of the founders of CalCharge. “Whether the companies are developing flow batteries or container batteries, whether it’s for electric vehicles, the grid, or other applications—a cell phone battery may one day be in my car—we recognize the urgency and understand that better batteries are a key to the clean energy economy.”

With a pre-approved master CRADA—or cooperative research and development agreement—between Berkeley Lab and CalCharge, companies can more easily access the Laboratory since there is no need to negotiate an individual CRADA to work with Berkeley Lab. “We’re able to get them into the Lab in a matter of weeks,” Srinivasan said. “We believe California is a real center of battery innovation, and Berkeley Lab can be an important part of that ecosystem. It’s hard for national labs to move on a dime, but we’re finding ways to be responsive to companies—especially startups, who can’t wait months to find out if something works.”

Separately, Berkeley Lab has another commercialization program focused on startup battery companies. Supported by the Department of Energy’s Tech-to-Market program, it provides startups the opportunity to work with Berkeley Lab scientists on a simple proof-of-concept experiment without incurring any cost. “We may have the equipment that can quickly tell a startup if something is working or not, so with this program, they sign a material transfer agreement and can walk in that same week,” Srinivasan said. “It’s immediate access.”

Since the CalCharge CRADA was established early last year, three companies have started working with Berkeley Lab. Two of them—Hitachi and Volkswagen—have sent scientists to spend part or all of their time “embedded” with a Berkeley Lab scientist. A third—Emeryville, California-based startup company Halotechnics—is using Berkeley Lab facilities to demonstrate its thermal energy storage technology at different temperatures.

The Hitachi scientist has been working with Berkeley Lab battery scientist Robert Kostecki, whose research group is among the world leaders in developing advanced characterization approaches to understanding the fundamentals of battery systems. Together they have been working to gain a deeper understanding of the failure mechanism of Lithium-ion batteries. “I was pleased to realize that leading battery companies, including Hitachi, recognize that future progress in energy storage technologies depends on the fundamental understanding of the basic principles of a device’s operations and function,” Kostecki said.

The Hitachi scientist became fully trained in scanning probe microscopy and optical spectroscopies while also completing a research project in studying the degradation of positive electrode materials. Together they expect to publish a research paper that will further understanding in the field.

The collaboration has also been beneficial to Kostecki. “For us this is a reality check,” he said. “Working at a research lab is great for studying fundamental phenomena. On the other hand linking them with the real problems of the battery technology is extremely critical. We feel we’re now better positioned to pick scientific tasks linked to real problems, and we’re ready to address them through both fundamental and applied research.”

The VW scientist has been working with Berkeley Lab battery researcher Marca Doeff, whose expertise is in cathode materials for Li-ion batteries. “Everybody is interested in upping the energy density of the cathode,” she said. “It’s really the limiting factor right now in batteries.”

Specifically, Doeff has been working on a class of cathodes called NMC, or nickel-manganese-cobalt. Each element provides certain advantages, but they have their drawbacks as well. “So you play around with the compositions to get what you want,” she said. “We’ve been substituting some metals to add some benefits. That was something that interested VW.”

The collaboration has also been a learning experience for Doeff. “If you want to stay relevant it’s really nice to be able to talk to somebody from industry who can say, these are the problems we’re having,” she said.

Berkeley Lab scientist Mike Tucker is an expert in high-temperature fuel cells who is working with Halotechnics on its project, which will involve testing and analyzing various materials compositions. “Working with Halotechnics has helped the Lab refocus long-standing expertise and resources in high-temperature materials on today's pressing energy storage needs,” he said.

In addition to Berkeley Lab, SLAC National Accelerator Laboratory has also joined as a CalCharge partner, making its resources available to member companies under the CRADA. CalCharge was launched in 2012 by Berkeley Lab and CalCEF, a nonprofit organization. Another one of its programs is “Battery University,” where Berkeley Lab scientists help design battery classes at San Jose State University.

“This program is really a win-win, for industry, for the national labs, and for the U.S. economy,” Srinivasan said. “With these collaborations, a ‘center of gravity’ for the California energy storage cluster is taking shape, which will benefit all stakeholders.”