The team at the BETCy Energy Frontier Research Center is learning how electron transfer processes drive energy-intensive reactions that produce ammonia and other chemicals. Knowing how electrons move could lead to processes that let industrial reactions soar over energy barriers. 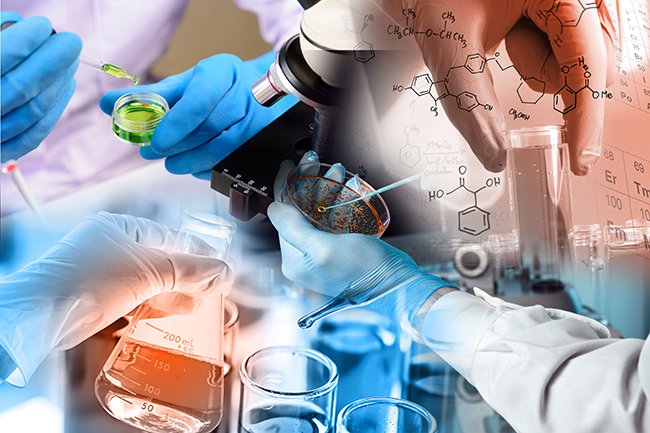 Newswise — Scoop up a handful of good garden soil. The dark soil may well contain tiny bacteria that take in nitrogen from the air and release a compound (nitrogen-rich ammonia) that nourishes corn, carrots, and other plants. The microbe makes ammonia using a bit of energy it gathers from sunlight.

Industrial manufacturers make ammonia too (the nitrogen, or N, in a bag of NPK fertilizer) using a much more energy-intense process. By some estimates, industrial ammonia makers burn through 2 to 3% of the world's energy production each year.

What if we could apply the best parts of the bacteria's highly efficient process to industry to produce ammonia and other chemicals? That's what the Center for Biological Electron Transfer and Catalysis (BETCy) is digging into. The Department of Energy's (DOE's) Office of Science funds the center, one of 46 Energy Frontier Research Centers.

At BETCy, center director John Peters and his colleagues are learning how electron transfer processes drive energy-intensive reactions. These transfers maximize the reactions' efficiencies at the molecular level. Learning the processes well enough to use the best parts could let industrial reactions soar over energy barriers.

Microbes finesse energy barriers; scientists want to know how. Microbes often tie two reactions together. The first reaction is an energetic one that gives off extra energy (electrons); the second reaction is lethargic. It's a bit like playing pool. The fast-moving cue ball sends a slower moving ball into the corner pocket. But electron bifurcation is different.

In electron bifurcation, a protein uses electrons from two reactions to drive a third. It's as if the cue ball and the target sent their energy into the table and the table itself moved a third ball.

"There's a synergy involved that's rather elegant and potentially very beneficial for industry," said Peters. "This work has groundbreaking implications. It would help enable you to use ammonia and other stuff that you couldn't normally use for energy storage."

When nobody owns the spotlight. Figuring out how bacteria transfer electrons requires a team with expertise in diverse disciplines. Electron bifurcation and related transfers don't fit into a single field. The answer was to build a team with experts from related fields and attack questions from multiple angles.

The BETCy team includes biochemists and microbiologists who examine the structure and inner workings of electron-shipping proteins. They work with inorganic chemists, electrochemists, and catalysis researchers. Add in computational modelers and theorists. Together, this team's making progress. "A lot of our appreciation of electron transfer was based on theory," said Peters. "But when you make the connections to real physical phenomena—that have been around for billions of years—you can say THIS is what's actually making it happen."

"You can go so much farther in your projects because you collaborate with so many other people," said BETCy member Natasha Pence, who is working on her doctorate at Montana State University.

Sharing credit. Large teams often struggle to get early career scientists noticed. Well-known and outspoken peers can overshadow those starting out. Peters and the other professors in BETCy created a culture that shares the spotlight.

Take the strategy meeting in Washington, D.C. These meetings can be exclusive, but not at BETCy. "All our graduate students had the opportunity to attend," said Pence. "It was very beneficial. We got to participate in developing fundamental aspects of our EFRC's mission." Learning how to develop strategies, build consensus, and run such meetings are just some of the learning opportunities baked into BETCy by Peters and his team.

Students often garner the first author spots on articles in scientific journals, a coveted place that takes a lot of work. "That role teaches you how to communicate and put necessary pieces of data together to tell a compelling story," said Pence, who's made the author list on five papers about BETCy-supported research, including first author on a 2017 study.

"We are seeing things nobody's ever seen before," said Peters. "And we're engaging the next generation. Those are both exciting aspects of the journey."

This article is part of a series that explores how scientific teams come together in the Department of Energy's Energy Frontier Research Centers to solve intractable problems.

The Office of Science is the single largest supporter of basic research in the physical sciences in the United States and is working to address some of the most pressing challenges of our time.

Kristin Manke is a Communications Specialist on detail with the Office of Science.