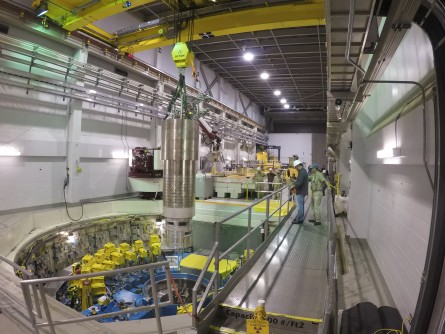 A heavy overhead crane is used to lower the 64,000-pound inner reflector plug into position, right in the heart of the Spallation Neutron Source.

For many species, winter serves as a time to rest and recuperate to return stronger in the year ahead. In many respects, so is it also for certain large-scale science facilities.

In December 2017, the Spallation Neutron Source (SNS) at the Department of Energy’s (DOE’s) Oak Ridge National Laboratory (ORNL) entered into an extended 5 month scheduled outage to perform a number of high-priority jobs needed to ensure safe and reliable operation at higher powers. Most notable were the replacement of the facility’s inner reflector plug (IRP) and the accelerator’s radio frequency quadrupole (RFQ).

SNS is the most powerful pulsed accelerator-based neutron scattering facility in the world. Because neutrons have no charge and are deeply penetrating, they’re ideal for studying fundamental behaviors in energy and materials at the atomic scale.

Since coming online in 2006, the one-of-a-kind facility has pushed the limits of science and engineering, increasing the power levels and the number of scientific publications nearly every year.

Significant science breakthroughs possible only with neutrons at SNS include unprecedented insights into the exotic behavior of the magnetic Majorana fermion—a promising building block for topological quantum computing; mitigation of air pollutionusing vibrational spectroscopy to characterize how a metal organic framework material can be used to remove harmful nitrogen dioxide from the atmosphere; and first-of-a-kind experiments such as performing real-time in situ measurements on a running gas-powered engine.

SNS generates neutrons by propelling protons down a linear accelerator, or linac, and smashing them into a metal target vessel filled with liquid mercury. Upon impact, “spalls” of neutrons are created and sent to complex and powerful instruments for experimentation.

Out with the old, in with the new

“We operate by running three liquid mercury targets a year, which means we need to execute three outages per year,” said Fulvia Pilat, division director for ORNL’s Research Accelerator Division. “Typically outages take between 3 and 6 weeks for target changes and maintenance, but the 2017–18 winter outage had to be much longer to prepare the machine to run at 1.4 megawatts.”

Priority number one was the replacement of the IRP, which had been in service since the facility was constructed in 2006. The IRP is a large cylindrical vessel approximately 20 feet tall and weighing about 64,000 pounds. Its function is to slow down and funnel the neutrons produced from the mercury target, docked at the bottom end of the IRP, to the surrounding instruments.

Moderators inside the IRP are positioned above and below the target. Two of the four moderators are lined with special neutron absorbing materials—gadolinium and cadmium—to tune the neutron output. Over the years, the materials had been depleted, and replenishing them ensures more neutrons are used efficiently for experiments.

Also in operation since 2006 was the RFQ, the first accelerating element of the accelerator’s front-end assembly. The RFQ receives hydrogen ions generated by the ion source and provides the particles with the initial boost of acceleration down the linac.

“The main problem with the RFQ was the transmission. At the time, 100% of the ions were going into the RFQ, but only 60% were coming out. That means 40% of the beam was being wasted,” said Pilat. “To operate at higher power levels you want to optimize the current, and the new RFQ was actually designed and built to improve that.”

It was a big job, she explained. The months-long process of replacing the RFQ meant first disconnecting the old structure from the accelerator and rebuilding the systems feeding into the RFQ, such as the control, vacuum, and cooling systems. Next, the team had to carefully transport the new RFQ from ORNL’s Beam Test Facility, where it had been in commissioning stages for several years, and place it into its new home with precision. Finally, the old RFQ was reassembled back at the Beam Test Facility for high-energy physics experiments.

“Now, we’re into the 90% transmission level. So that was a huge success,” said Pilat.

Wise use of resources

In addition to replacing major hardware, two other critical jobs included plasma processing of some of the accelerator’s cryomodules and the facility’s conversion from light to heavy water.

During neutron production, hydrocarbon buildup occurs inside the inner elements of the accelerator’s cryomodules—large, barrel-shaped capsules that focus and accelerate the beam—and weakens the electrical fields generated for beam acceleration.

A handful of cryomodules were cleaned using a technique called plasma processing wherein, essentially, hot plasma is injected into the accelerating cavities to burn off the contamination and then subsequently pumped out as a gas. Because it can be done in situ and doesn’t require removing the structure from the accelerator, the technique has reduced the maintenance time from months to weeks.

“Taking advantage of the long time we had to process some of the cryomodules was another success,” said Pilat. “As a result, the accelerator has reached its design energy threshold of 1.0 giga-electron volts.”

To mitigate the intense heat generated by the protons striking the metal target, the IRP is cooled with water. Light water—the same as drinking water—has been used since operations began in 2006. Heavy water—commonly used in nuclear reactors—has more deuterium than normal water and absorbs significantly fewer neutrons.

“Replacing the light water cooling the IRP with heavy water gives an average gain of about 20% in the number of neutrons illuminating the beamlines,” said Ken Herwig, group leader for Instrument Methods, Projects, and Technologies. “This increase in neutron flux enables shorter time-resolved in situ measurements and measurements on smaller or weaker scattering samples.”

Putting it all together

Planning was vital to job execution and completion, says SNS outage manager Glen Johns. Sophisticated scheduling software was used to monitor progress and enable resource allocation based on the priority of critical and noncritical jobs.

“With over 1,500 activities to manage, logic-driven resource-loaded plans were critical to our success,” said Johns.

The success of the long outage demonstrated the ability to plan and safely execute large-scale upgrades and construction projects. In the future, SNS projects include the Proton Power Upgrade, which will double SNS power to 2.8 megawatts, and the Second Target Station that will open new avenues of science for novel complex materials needed to support the US economy and provide solutions to challenges in energy, security, and transportation.

SNS is a DOE Office of Science User Facility. UT-Battelle manages ORNL for DOE’s Office of Science. The Office of Science is the single largest supporter of basic research in the physical sciences in the United States and is working to address some of the most pressing challenges of our time. For more information, please visit http://science.energy.gov/.—by Jeremy Rumsey