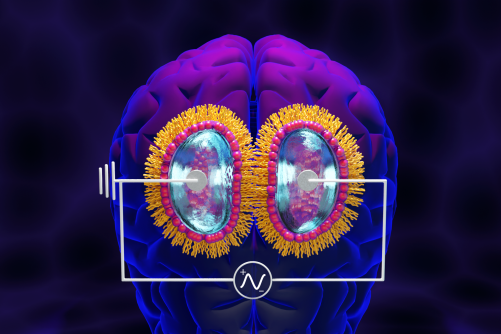 Newswise — While studying how bio-inspired materials might inform the design of next-generation computers, scientists at the Department of Energy’s Oak Ridge National Laboratory achieved a first-of-its-kind result that could have big implications for both edge computing and human health.

Results published in Proceedings of the National Academy of Sciences show that an artificial cell membrane is capable of long-term potentiation, or LTP, a hallmark of biological learning and memory. This is the first evidence that a cell membrane alone – without proteins or other biomolecules embedded within it – is capable of LTP that persists for many hours. It is also the first identified nanoscale structure in which memory can be encoded.

“When facilities were shut down as a result of COVID, this led us to pivot away from our usual membrane research,” said John Katsaras, a biophysicist in ORNL’s Neutron Sciences Directorate specializing in neutron scattering and the study of biological membranes at ORNL. “Together with postdoc Haden Scott, we decided to revisit a system previously studied by Pat Collier and co-workers, this time with an entirely different electrical stimulation protocol that we termed ‘training.’” This eventually led to data that are practically indistinguishable from the LTP signal observed in human brains.

Encoding memory in nanoscale systems has the potential to advance the development of next-generation computing materials and architectures that seek to match the efficiency and flexibility of human cognition — known as neuromorphic computing. While the implications for artificial intelligence may be obvious, brain-like computation will also dramatically alter the energy efficiency and computing capabilities of next-generation devices.

“Memory and logic in the brain are intertwined,” said Collier, staff research scientist at the Center for Nanophase Materials Sciences, a DOE Office of Science user facility at ORNL where the research was performed. “But in modern computers, these functions happen in different locations — a bottleneck the brain does not have.”

Even today’s supercomputers have separate locations for processing and memory. By merging these functions, neuromorphic computers could help keep pace with exponentially growing data sets that are becoming more complex as the Internet of Things, or IoT, and the interconnectivity of devices become commonplace in homes and workspaces. It would also greatly advance edge computing, the ability of a device to do its own logic at the site of data collection, without having to send information to a central server or cloud.

Also, scientists have not yet identified a nanoscale structure in the brain where memory is stored. Large sections of the brain, such as the hippocampus, are known to store memory, but much remains unknown about where memory is stored in the hippocampus and the molecular mechanisms responsible for it. Importantly, cellular membranes have been overlooked as structures in which information could be encoded, even though lipids, a major component of membranes, make up most of the brain’s mass.

The unexpected result of achieving LTP in a pure lipid membrane will initiate a re-examination of where and how memory is stored in a living brain. If neural cell membranes are found to be a critical feature in human memory, this could lead to novel treatments for the more than a billion people worldwide that are living with neurological disorders.

“If neurobiologists can find evidence of this in the brain, it could have dramatic impacts on how we understand dementia and learning,” said Katsaras. “Importantly, the membrane can offer a novel therapeutic target for brain diseases that do not respond to drugs targeting proteins.”

The nanoscale systems used in this study create an artificial membrane by bringing together two micron-sized lipid-coated water droplets within an oil suspension. At the interface between the two droplets, a lipid bilayer forms that mimics the cell membranes of neuronal synapses in the human brain.

Previous ORNL research showed that this biomembrane system is capable of storing an electric charge, but only for short periods of time. In the new study, the presence of LTP means that there are new avenues for how this soft material system could be used in neuromorphic devices or how it could serve as a model for the construction of solid-state devices with similar features.

“Now that we’ve begun to define the electrical protocols to induce LTP in lipid bilayer membranes, we are preparing to make two-terminal crossbar architectures in which multiple nanoscale membranes interact, allowing for active logic to be performed, not just passive storage,” said Collier. “Right now, we’re using single systems; going forward, we need to learn how to wire them together.”

In addition to partnering with neurobiologists to explore the biomedical implications of this finding, future neuromorphic computing work on the biomembrane system will involve simulations and use of ORNL’s leadership facilities in neutrons and computing.

“What we’re seeing are serendipitous discoveries that came from somewhat curiosity-driven research conducted during the pandemic,” said Collier. “But it’s a significant finding for neuromorphic computing. We don’t know exactly how this is going to work, but that’s the fun part.”

The journal article is published as “Evidence for long-term potentiation in phospholipid membranes.”

The research was supported by the DOE Office of Science. Data collection and analysis were performed at the CNMS, while all samples were prepared at The University of Tennessee Shull Wollan Center, co-located at ORNL.

UT-Battelle manages ORNL for the DOE Office of Science. The single largest supporter of basic research in the physical sciences in the United States, the Office of Science is working to address some of the most pressing challenges of our time. For more information, please visit https://www.energy.gov/science.