Studier developed a system that is widely used in laboratories throughout the world for producing substantial amounts of almost any desired protein from a cloned gene. 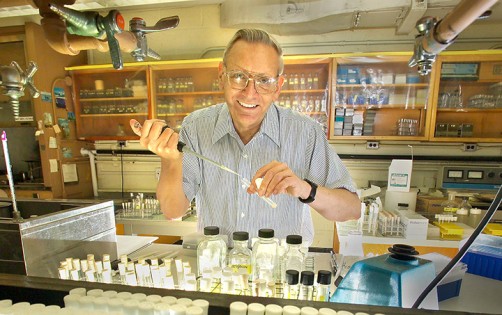 William Studier, a new Fellow of the National Academy of Inventors, developed a system for producing substantial amounts of almost any desired protein from a cloned gene.

Newswise — UPTON, NY – F. William Studier, a Senior Biophysicist Emeritus at the U.S. Department of Energy’s Brookhaven National Laboratory and Adjunct Professor of Biochemistry at Stony Brook University, has been elected as a Fellow of the National Academy of Inventors (NAI). He is among 148 renowned academic inventors being recognized by NAI for 2018. Election to NAI Fellow status is the highest professional distinction accorded solely to academic inventors who have demonstrated a prolific spirit of innovation in creating or facilitating outstanding inventions that have made a tangible impact on quality of life, economic development and the welfare of society.

“I am honored to be selected to join the distinguished group of Fellows of the National Academy of Inventors, and I am grateful to the many friends and co-workers who contributed to the work being recognized here,” Studier said.

Studier is best known for his invention of an efficient system for engineering common E. coli bacteria to produce almost any desired protein from a cloned gene. Known as the T7 expression system, this method leverages knowledge gained from basic studies of how T7 bacteriophage (a virus that inserts its DNA into an E. coli cell) rapidly redirects all activity in the cell to producing new T7 viruses. The T7 expression system uses crucial elements of T7 DNA to redirect most of the protein production in the cell toward a single protein specified by a cloned gene. The system has been useful for producing a wide range of proteins.

In the course of his studies, Studier developed other tools for molecular biology, including methods to measure the size and shape of single- and double-stranded DNA, and slab-gel electrophoresis for studying proteins and nucleic acids. These tools, along with the T7 system, are now used in biochemistry and structural biology labs around the world for basic biomedical research and practical applications, including medical diagnostics and treatment.

“I have worked in an exciting era in molecular genetics and have had the opportunity to follow my interests and to take a long view in exploring basic biological processes and practical applications. I’m happy if some of the techniques I developed for my own work have been widely useful to other researchers,” Studier said.

Approximately 800 companies have licensed the T7 system, which has earned Brookhaven Lab much of its royalty income over the years. These T7 licenses and licenses for the auto-induction bacterial growth media have resulted in royalties and license fees totaling about $72 million—income that helped the Lab to fund strategic research and deployment, maturation of promising technologies, and educational programs.

“Repeatedly during his career, Bill Studier solved problems he encountered in his own work with solutions that were then taken up by biochemists and geneticists around the world. His commitment to basic research is evident by his freely sharing his inventions with academic labs without cost to maximize their usefulness,” said John Shanklin, chair of the Biology Department at Brookhaven Lab.

F. William Studier earned a B.S. in biophysics from Yale in 1958, followed by a Ph.D. from the California Institute of Technology in 1963. He worked as a postdoctoral fellow in the Department of Biochemistry at Stanford University School of Medicine, and then joined Brookhaven Lab's Biology Department in 1964 as an assistant biophysicist. Over the years, Studier rose through the department's ranks, receiving tenure in 1971 and becoming a tenured senior biophysicist in 1974. He served as chair of the Biology Department from 1990 to 1999 and then returned to research. His achievements have been recognized by election to the American Academy of Arts and Sciences in 1990, the National Academy of Sciences in 1992, and as a Fellow of the American Association for the Advancement of Science in 2007. Retired from Brookhaven Lab in 2015, he retains the title of Senior Scientist Emeritus. He holds 15 patents of which 9 patents have been licensed and commercialized, including those on the T7 system, which is the most successful Brookhaven Lab technology invented to this day.

More about the NAI Fellows program

“I am very proud to welcome another class of outstanding NAI Fellows, whose collective achievements have helped shape the future and who each day work to improve our world,” said Paul R. Sanberg, President of the NAI. “Each of these new NAI Fellows embodies the Academy’s mission through their dedication, creativity and inventive spirit. I look forward to working collaboratively with the new NAI Fellows in growing a global culture of innovation.”

The 2018 NAI Fellows will be highlighted with a full-page announcement in the January 25, 2019, issue of The Chronicle of Higher Education and in upcoming issues of Technology & Innovation.

About the National Academy of Inventors
The National Academy of Inventors is a member organization comprising U.S. and international universities, and governmental and non-profit research institutes, with over 4,000 individual inventor members and Fellows spanning more than 250 institutions worldwide. It was founded in 2010 at the University of South Florida to recognize and encourage inventors with patents issued from the U.S. Patent and Trademark Office, enhance the visibility of academic technology and innovation, encourage the disclosure of intellectual property, educate and mentor innovative students, and translate the inventions of its members to benefit society. The NAI publishes the multidisciplinary journal, Technology & Innovation. www.academyofinventors.org