To better understand how damage from high-energy X-rays affects imaging, researchers shot the most powerful X-ray laser in the world at a series of atoms and molecules. 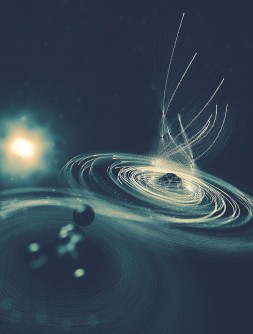 In this illustration, an X-ray laser pulse from SLAC's Linac Coherent Light Source knocks so many electrons out of a molecule's iodine atom that the iodine pulls in electrons from the rest of the molecule.

Newswise — Reading these words, your eyes let you see each letter and the spaces between them. But if you need reading glasses, the letters may be fuzzy or incomprehensible. Scientists face a similar challenge. Gathering the right data depends on having tools that can provide accurate, comprehensive measurements. After all, scientists want to have the clearest sight possible.

Physicist Artem Rudenko from Kansas State University and his colleagues pondered how to improve the images of viruses and microparticles that scientists get from X-rays. To dig into the issue, they shot the most powerful X-ray laser in the world — located at the Department of Energy (DOE) Office of Science’s Linac Coherent Light Source (LCLS) — at a series of atoms and molecules.

Can We Trust What We See?

Scientists regularly use X-ray light sources to take pictures and videos of biological and chemical processes and objects. For example, a recent study at the LCLS looked at how antibiotics and the parts of the body that produce proteins interact.

But like a farsighted person’s eyes, these instruments can affect scientists’ perception. In less time than it takes light to travel a millimeter, the X-ray obliterates the sample. But the X-ray damages the sample long before it’s annihilated — even while scientists are trying to capture their images.

This means the images captured are of a damaged sample, not the original. That can distort the data and how scientists interpret it.

Scientists have done quite a bit of work studying the effects of lower energy “soft” X-rays. They concluded images from soft X-rays provide a good reproduction of the original structures despite the damage.

But most imaging research uses higher energy “hard” X-rays because they often provide more detail. Scientists had less data about the damage very intense hard X-rays cause. They had no equivalent to an eye chart to estimate the extent of the problem or what might need to be adjusted. Rudenko and his colleagues aimed to change that.

The Only Spot in the World

It was obvious where they needed to go — the LCLS.

“That was the only spot in the world that we could focus this [amount of] light,” said Rudenko.

The team looked at how X-rays affect heavy atoms with lots of protons, neutrons, and electrons. Many heavy atoms play important functions in biological reactions, such as iodine’s role in producing hormones. Because heavy atoms interact more with X-rays than light ones, scientists often use heavy atoms to get clearer images.

Like everyone else, the team had to compete for time at the LCLS, an Office of Science user facility hosted by DOE’s SLAC National Accelerator Laboratory. They rewrote and resubmitted their proposal three times before it was accepted. Compared to medical research, it was a tough sell. “We just wanted to blast the heck out of a molecule,” said Daniel Rolles, an assistant professor at Kansas State University. “Our argument was, ‘Hey look, you guys can only understand what you’re doing if you let us do our stuff first.’”

The Moment of Truth

It was finally time to turn on the X-ray.

“It was just all knobs to the right,” said Rolles. “We basically went all-out in terms of intensity.”

First, they hit a xenon atom with the LCLS’s full power.

That reaction went as expected. The X-ray ionized electrons close to the nucleus, blasting them out of the atom. As the closest spaces emptied out, electrons further away moved inward. Then the new electrons became energized and zoomed out of the atom as well. Within a millionth of a billionth of a second, that process repeated itself until only a few electrons were left. Overall, a single xenon atom ejected 48 of its 54 electrons.

Satisfied, the team ran the entire experiment again. This time, they pointed the X-ray at an iodine atom surrounded by a few others in a molecule.

That’s when things got weird.

“It was clear that there was something happening under these experimental conditions that we hadn’t seen anywhere else, so that was very exciting,” said Rebecca Boll, a scientist on the study who works at the European X-Ray Free Electron Laser facility.

The team wanted to see if the same thing would happen with a bigger molecule. Sticking another iodine-containing molecule under the X-ray, they watched as it spit out so many fragments that it was difficult to keep track of them. They estimated it ejected more than 60 electrons.

While the researchers knew what happened, they didn’t know why. An iodine atom losing two electrons could result in a huge number of possible electron structures. Not only did the iodine atom lose more than 50 electrons, its structure completely changed after each loss.

To help explain this process, they turned to their colleagues in theoretical physics at the Center for Free-Electron Laser Science in Germany. Modeling revealed that under lower intensities, both the atom by itself and the atom within the molecule absorb just a few photons at a time. At the LCLS, the molecule absorbed up to 20 photons — far more than an atom. That super-charged the system.

Finding out X-rays can strongly affect atoms besides the one directly hit by the X-ray showed that scientists have to take a second look at their images. In the future, the team predicts they will be able to plot out an X-ray’s effects on a particular molecule. Just as reading glasses adjust a farsighted person’s sight, scientists will be able to better account for radiation’s influence on their results. That knowledge will help them see a clearer picture than ever before.

Shannon Brescher Shea is a Senior Writer/Editor in the Office of Science, [email protected]