Bob Ellis: New chief engineer at PPPL has designed components for fusion experiments around the world 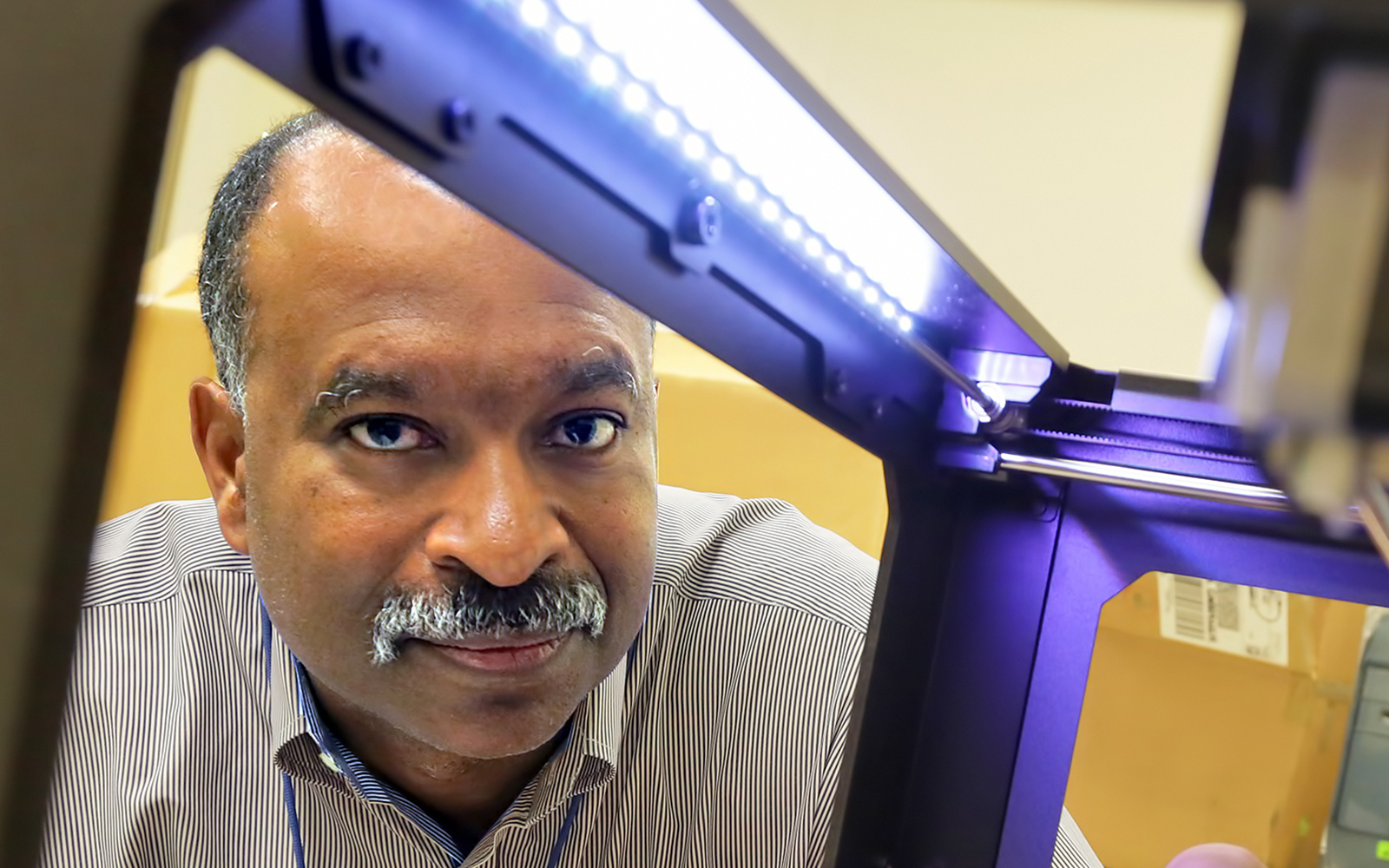 Ellis with a 3d-printed prototype for a non-mirror part of the water-cooled mirror designed to launch microwaves on the Korea Superconducting Tokamak Advanced Research (KSTAR) facility.

Newswise — It is possible that no one at the U.S. Department of Energy’s Princeton Plasma Physics Laboratory  (PPPL) has deeper roots here than Bob Ellis. The son of a well-known physicist, Ellis has spent almost four decades designing and overseeing construction of components of some of the world’s biggest fusion experiments, from PPPL’s Tokamak Fusion Test Reactor (TFTR) and the National Spherical Torus Experiment-Upgrade (NSTX-U),  to the Joint European Torus in England and the Korean Superconducting Tokamak Advanced Research (KSTAR) fusion reactor in South Korea.

Now Ellis is making the transition to chief engineer and will ensure activities are conducted rigorously and efficiently. Ellis has been acting chief engineer since August when Charlie Neumeyer retired.

Valeria Riccardo, head of Engineering, said Ellis’s experience with a wide range of experiments makes him invaluable. “He knows nearly everything at PPPL,” Riccardo said. “He is very eclectic – he’s broad but he’s thorough. He is deeply respected and he is able to listen proactively and extract information and use a Socratic approach when necessary in finding a solution.”

Ellis said he is happy to take on a role as PPPL begins constructing critical components to repair the NSTX-U, PPPL’s flagship experiment, and constructs infrastructure for the Facility for Laboratory Reconnection Experiment (FLARE), which will explore the astrophysical process of magnetic reconnection. “NSTX-U is going to lay the groundwork for a decade of fruitful research,” Ellis said. “And it’s exciting to be part of that.”

Engineer Tim Stevenson, who has worked with Ellis for more than three decades, calls him an “engineer’s engineer.” “He’s always been so highly-regarded as an engineer and he’s so knowledgeable,” Stevenson said. “It’s great to have one of our own rise to chief engineer.”

Much of Ellis’s work has focused on designing and building diagnostics that measure and analyze the results of fusion experiments and on components that transmit radiofrequency waves to heat the plasma to facilitate fusion reactions.

Ellis’s connection to PPPL goes back to his childhood when his father, Robert Ellis Jr., was a physicist at the Laboratory. Robert Ellis Jr. was one of the original scientists on Project Matterhorn, the classified project that later became PPPL. He frequently took his son from their home in Princeton to the Laboratory. The younger Ellis was by his father’s side watching experiments on the Model B Stellarator and the Adiabatic Toroidal Compressor, as well as TFTR. “I’ve always been a tinkerer and interested in mechanical things,” Ellis said. “It was interesting to see that stuff.”

The father and son worked together briefly after the younger Ellis came to the Laboratory in 1981. Robert Ellis Jr. was head of the S-1 Spheromak and his son worked on S-1 briefly before moving to TFTR to work on diagnostics under Ken Young. Robert Ellis Jr. died in 1989. Ellis remained in the analysis division at PPPL until several years ago. “My preference was always to design and build stuff,” Ellis explained.

Ellis graduated from Princeton University in 1979 with a degree in mechanical and aerospace engineering and received a master’s degree in mechanical engineering from the New Jersey Institute of Technology in 1998. Ellis said he’s found plenty of variety working at PPPL. “I’ve done a lot of different things along the way,” he said. “That’s one nice thing about working here. You never feel like you’ve done the same thing for 40 years.”

When Ellis worked on the last batch of radio frequency antennas for TFTR about one year before it closed, he forged a partnership with physicist Joel Hosea that lasted until Hosea died last year. With Hosea, Ellis designed and oversaw the fabrication of a type of radiofrequency heating called ion cyclotron range of frequency (ICRF) heating for the Alcator C-Mod tokamak at the Massachusetts Institute of Technology (MIT).

Ellis also designed and oversaw construction of equipment to produce launchers for another type of radiofrequency heating, electron cyclotron heating (ECH), for the DIII-D National Fusion Facility at General Atomics in San Diego. He used the DIII-D design as the basis for two such launchers on KSTAR.

Ellis has recently designed a water-cooled mirror for KSTAR that can withstand the super-high heat of plasma experiments while it beams microwaves from launchers to heat the plasma. He used a 3D printer to construct the metal parts for the experiment, the first time such a technique was used at PPPL. See story here.

Ellis crossed paths with his future boss nearly two decades ago when Valeria Riccardo was in charge of analysis on the Joint European Torus (JET) in the United Kingdom. Ellis was then working on a collaboration between PPPL and JET to design and build a diagnostic called the Faraday Cup Detector Array. Ellis met Riccardo when he traveled to JET for design reviews in the early 2000s. He supplied replacement detectors for that diagnostic in 2016, shortly before Riccardo became head of engineering at PPPL. “I was proud of that work just because the requirements of the machine were very demanding,” Ellis said. “That job was also a huge accomplishment for the technicians involved.”

Ellis worked on numerous other projects at PPPL. He designed and oversaw fabrication and installation for conductors for radiofrequency heating systems on NSTX, the first version of PPPL’s spherical tokamak, which operated for 10 years starting in 1999. When the device was upgraded to the NSTX-U to double the magnetic field and heating power, Ellis helped design diagnostics for the upgrade. He has been head of the NSTX-U Diagnostics Design and Fabrication since 2014 and the responsible engineer for diagnostics on the Recovery Project since 2016.

Ellis has served as a mentor for many engineers at PPPL over his career and considers it a way of paying forward the mentoring he has received. “I find that an important and enjoyable part of work is passing on, not just your technical knowledge but how you approach a job and how you tackle a problem,” Ellis said. “I try to pass that along to younger engineers when I get a chance.”

Ellis lives with his wife of 21 years, Connie, in Ewing Township. For 17 years, he coached the bicycle racing team at Princeton University. He is also an accomplished musician and has been first violinist for the Princeton Society of Musical Amateurs for the past decade.

Ellis said he often reflects on how technology evolves over the decades. He imagines how Guglielmo Marconi, the inventor of long-distance radio transmission, would react if he saw a cellphone. Ellis said he likes to think of the new technologies that will arise in the future to take the place of tokamaks like TFTR, KSTAR and NSTX-U as fusion energy becomes a viable means of generating electric energy. And he hopes he’ll see that in his lifetime. “It will be nice to say that I have been part of laying the groundwork for making it happen,” he said.

Caption: Ellis with a 3d-printed prototype for a non-mirror part of the water-cooled mirror designed to launch microwaves on the Korea Superconducting Tokamak Advanced Research (KSTAR) facility.