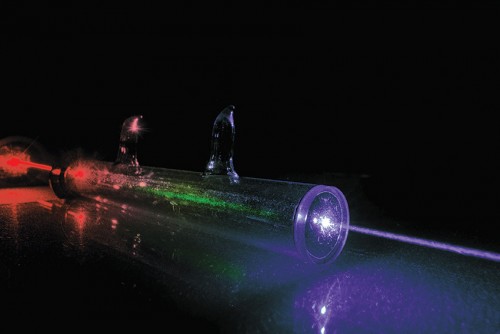 This tabletop laser system allows for unprecedented characterization of superconductors, semiconductors, and other electronic materials by increasing the energy of an infrared laser to the sought-after extreme ultraviolet, which is invisible. In the artificially color-enhanced illustration, the increasing energy of the laser is represented artistically by the rainbow of colors, the energy of the infrared laser (red) is increased by crystals (green) and further increased to higher energies (purple) by gas interactions in the tube.

Bridging the gap between conventional and large-scale, x-ray synchrotron tools to capture the shortest electron wavelengths and critical details of electronic interactions, the optics of a tabletop laser system allows for unprecedented characterization of electronic properties and illuminates new physics. A crystal and advanced gas path optics increase the energy of an infrared laser to the desirable extreme ultraviolet for experiments that measure the characteristics of electrons ejected from materials exposed to the laser beams. Scientists demonstrated the new system in experiments on a range of materials from semiconductors and superconductors to topological insulators, which are exotic quantum materials that carry current on their surfaces.

This tabletop system can accelerate materials characterization and further our understanding of magnetic and electronic properties that enable energy-efficient electronics and information storage. Additionally, the energy of this photon (small packets of light) source is sufficient for modern mass spectrometry and could lead to improved sensitivity in environmental monitoring and chemical analysis in the petroleum industry.

A series of tabletop laser systems are being developed to bridge the materials characterization gap between conventional laser-based systems and large-scale, x-ray synchrotron tools. High-resolution photoemission spectroscopy measures the behavior of electrons in a material, an important aspect of superconductivity, magnetism, and other quantum phenomena. In this research, led by Stanford University and SLAC National Accelerator Laboratory in collaboration with the startup company Lumeras, an extreme ultraviolet laser photon source and angle-resolved photoemission spectroscopy (ARPES) system has been developed that has sufficiently high-energy beams, narrow pulse rates that also allow for ultrafast science, narrow energy spreads, and the ability to select signals (similar to a polarized lens filter). To make the extreme ultraviolet laser beam, an infrared laser is pulsed first through crystal reflections and then into a gas cell that increases the energy of the beam 9-fold, to the threshold of the extreme ultraviolet. In the ARPES experiments, the laser hits the samples, ejecting electrons that are measured by the spectrometer. The measured kinetic energy and exit angle of the emitted electrons are related to the energy and momenta of their electronic state in the sample. With photon energy nearly double that of previous systems, the new laser beam allows for improved energy and momentum resolution and full exploration of the momentum space of the material. Additionally, the ability to polarize the beam opens new avenues to further investigate the magnetic spin structure of a material. This extreme ultraviolet tabletop laser system allows for more precise measurements of complex quantum phenomena.