Buzz About Thermoelectrics Heats Up with Promising New Magnesium-Based Materials 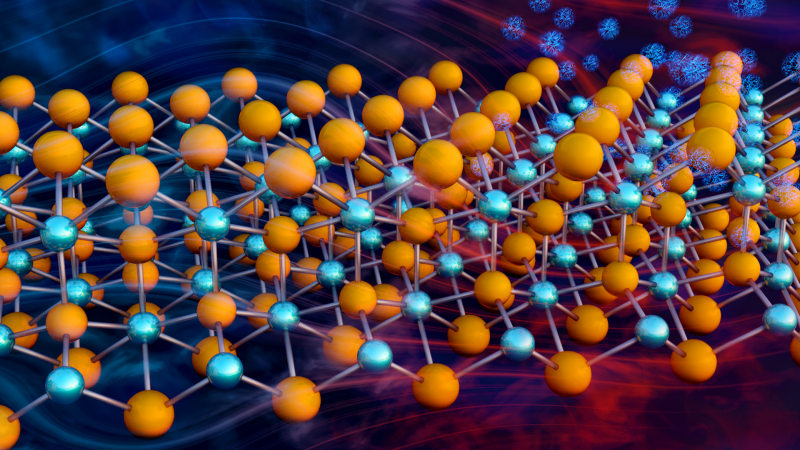 A representation of the crystal lattice of the thermoelectric compound Mg3Sb2 (magnesium atoms in orange, antimony in blue). An electric current is generated as heat traverses the material, propelled by phonon waves.

Newswise — The landing of NASA’s Perseverance rover was another leap forward not only for space exploration but also for the technology that’s powering the craft on its years-long mission on Mars—a thermoelectric generator that turns heat into electricity.

Looking for the next leap in thermoelectric technologies, researchers at Duke University and Michigan State University gained new fundamental insights into two magnesium-based materials (Mg3Sb2 and Mg3Bi2) that have the potential to significantly outperform traditional thermoelectric designs and would also be more environmentally friendly and less expensive to manufacture. Contrary to prevailing scientific wisdom regarding the use of heavy elements, the researchers showed that replacing atoms of heavier elements such as calcium and ytterbium with lighter magnesium atoms actually led to a threefold increase in the magnesium-based materials’ performance.

In their research, published in the journal Science Advances, the team used neutron and x-ray scattering experiments at the Department of Energy’s (DOE) Oak Ridge (ORNL) and Argonne national laboratories, as well as supercomputer simulations at the National Energy Research Scientific Computing Center (NERSC). Investigations at the atomic scale revealed the origin and mechanism behind the materials’ ability to convert thermal energy at room temperature into electricity. The findings indicate possible new pathways for improving thermoelectric applications such as those in the Perseverance rover and myriad other devices and energy-generation technologies.

Thermoelectric materials essentially create a voltage from a temperature difference between the hot and cold sides of the material. By converting thermal energy into electricity, or vice-versa, thermoelectric devices can be used for refrigeration or electric power generation from heat exhaust.

“Traditional thermoelectric materials rely on heavy elements such as lead, bismuth, and tellurium—elements that aren’t very environmentally friendly, and they’re also not very abundant, so they tend to be expensive,” said Olivier Delaire, associate professor at Duke. “Magnesium on the other hand is lighter and more abundant, which makes it an ideal material for transportation and spaceflight applications, for example.”

Typically, Delaire explained, lighter materials are not well suited for thermoelectric designs because their thermal conductivities are too high, meaning they transfer too much heat to maintain the temperature differential needed to produce the voltage. Heavier materials are generally more desirable because they conduct less heat, allowing them to preserve and convert thermal energy more efficiently.

“These magnesium materials, however, have remarkably low thermoelectric conductivity despite having a low mass density. Those properties could potentially open the door to designing new types of thermoelectrics that don’t rely on heavy materials with toxic elements,” Delaire explained.

The magnesium materials the team studied belong to a larger class of metal compounds called Zintls. The atomic structure, or arrangement of atoms, in Zintl compounds is such that it’s relatively easy to experiment with and substitute different elements in the material—for example, replacing a heavy element with a light element to achieve optimal performance and functionality.

“In chemical studies, exploring possibilities for new materials often involves substituting one element for another just to see what happens. Usually we replace them with chemically similar elements in the periodic table, and one of the big advantages to using Zintls is that we can experiment with a lot of different elements and different combinations,” said the paper’s first author Jingxuan Ding, a graduate student researcher in Delaire’s group at Duke. “No one expected magnesium to be the better compound, but when our collaborators at Michigan State substituted it into the materials’ ingredients, we were surprised to find that was in fact the case, so the next step was to find out why.”

The atoms in a material are not static, or motionless; they vibrate with amplitudes that increase with higher temperatures. The collective vibrations create a ripple effect, called a phonon, that looks like sets of waves on the surface of a pond. Those waves are what transport heat through a material, which is why measuring phonon vibrations is important for determining a material’s thermal conductivity.

Neutrons are uniquely suited for studying quantum phenomena such as phonons because neutrons have no charge and can interact with nuclei. Delaire likened neutron interactions to plucking a guitar string in that they can transfer energy to the atoms to excite the vibrations and elicit hidden information about the atoms inside a material.

The team used the Wide Angular-Range Chopper Spectrometer, or ARCS, at ORNL’s Spallation Neutron Source (SNS) to measure the phonon vibrations. The data they acquired enabled them to trace the materials’ favorable low thermal conductivity to a special magnesium bond that disrupts the travel of phonon waves through the material by causing them to interfere with each other.

“Neutrons are one of the best ways to measure atomic vibrations like the ones we’re studying in these materials,” said Ding. “ARCS can detect a wide range of frequencies and wavelengths that helps us measure the phonon waves found in the material, which is exactly what we need to better understand how these low thermal conductivity materials operate.”

The neutron scattering measurements provided the research team with a broad survey of the internal dynamics of the magnesium Zintl materials that helped guide and refine computer simulations and subsequent x-ray experiments led by Ding. These were used to build a complete understanding of the origins of the materials’ thermal conductivity.

Complementary x-ray experiments at Argonne’s Advanced Photon Source (APS) were used to zoom in on specific phonon modes in crystal samples too small for neutron measurements. Both the neutron and x-ray measurements agreed with the supercomputer simulations performed at NERSC.

“Thermoelectrics are essential in applications like the Mars Perseverance rover that require simpler, more lightweight and reliable designs instead of the bulky engines with moving parts that are traditionally used to generate electricity from heat,” said Delaire. “These magnesium-based materials are a big advance in the field that could offer significantly more power efficiency and a lot of potential for more advanced thermoelectric applications.”