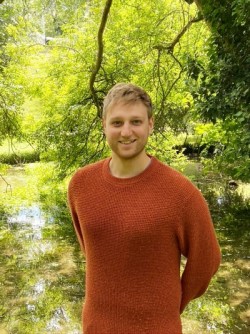 Newswise — Hadrons are elusive superstars of the subatomic world, making up almost all visible matter, and British theoretical physicist Antoni Woss has worked diligently with colleagues at the U.S. Department of Energy’s Thomas Jefferson National Accelerator Facility to get to know them better.

“It’s a massive honor. I wasn’t expecting this at all,” said Woss, 27. “It’s just amazing to think that the work that I’d been doing, people had really looked at and recognized and said, ‘This is really useful. This is really pushing forward the sort of ideas and the direction we wanted to go.’”

Nuclear physicists endeavor to understand the properties of hadrons, subatomic composite particles that form when quarks — the Legos of the universe — are bound together in prescribed ways by gluons, the elementary particles that carry the strong force.

Three bound quarks, for instance, form baryons (e.g. protons and neutrons), while quark and antiquark pairs form mesons. But there are many other potential combinations.

“There are very complicated ways in which you can think about sticking these Legos together,” Woss said. “So the quark and antiquark together form mesons, but they can be spinning in different orientations with respect to one another. They can also orbit each other in various ways. They might also have some other funky dynamics going on — for example, excited gluonic degrees of freedom. When we calculate the theory, we can begin to see the different types of mesons that you can have and how all of these different dynamics come together to give us the particles we see in our experiments.”

Woss’ thesis, “The Scattering of Spinning Hadrons from Lattice QCD,” discusses his efforts to contribute toward a sort of periodic table for hadrons — what and how many there are, their properties, if experimentalists are seeing some that theorists are not, and vice-versa.

Lattice QCD, or Lattice Quantum Chromodynamics, is a standard approach in physics to calculate QCD and study the properties of hadrons.

Woss’ objective was to tackle questions about the wide spectrum of possible hadron states, to look at the theory that underpins how things stick together and work out the properties of the hadrons that can appear following the set of rules that say how quarks and gluons interact. In particular, he has focused on calculating the properties of hadrons that can decay into other hadrons that carry a non-zero value of ‘spin’ — a fundamental property of subatomic particles.

For his doctoral work, Woss ran supercomputer simulations to use lattice QCD to examine the properties of particles that appear in high-energy collider experiments.

“We are trying to calculate properties of unique particles that can decay into other hadrons with non-zero spin from theory outside of an experiment - looking at these hadrons that we really haven’t looked at with these first-principles theoretical calculations before,” he said. “We can then see what that tells us about their properties and does that marry up with what experiment has seen.”

An experiment is underway at Jefferson Lab now that relates to one of his thesis calculations.

“And it’s really interesting to see, with the new data  coming from that experiment, how accurate or how close or what the differences are between what the theory has predicted and the experiment,” Woss said. “Is there anything else going on here or is there something we don’t understand? Has the theoretical result been realized in the experimental data?”

In his thesis, for instance, Woss describes an ambitious calculation of a particular particle, the b1 meson.

“That really demonstrated that the computer simulations and Lattice QCD now is at a point where we can ask and answer these quite difficult, challenging questions about hadrons that can decay into other hadrons with non-zero spin,” said Woss. “So what I hoped to have done, and what I think I did achieve, was push the lattice QCD framework to a point where it can really start contributing answers to a whole host of interesting hadrons that share this property — there’s a whole lot of them!”

The JSA Thesis Prize, established in 1999, is funded by the Jefferson Science Associates (JSA) Initiatives Fund program, which JSA provides to support programs, initiatives and activities that further the scientific outreach, and promote the science, education and technology missions of Jefferson Lab and benefit the laboratory’s user community. It is given each year for the top Ph.D. thesis on research related to Jefferson Lab science. It includes a $2,500 cash award and a commemorative plaque. Judges weigh four criteria: the quality of the written work, the student’s contribution to the research, the work’s impact on the field of physics, and service — how the work contributes to Jefferson Lab or other experiments.

“It is a very sophisticated calculation, the first of its kind, and is an important and impressive accomplishment,” said Will Brooks, JLUO BOD chairperson and founding experimental group leader at Universidad Técnica Federico Santa María, Valparaíso, Chile, where he is also a professor.

Woss made three visits to Newport News from 2017 to 2019 to consult with colleagues who are part of the hadron spectrum collaboration based at Jefferson Lab. Last year, he earned his doctorate from the University of Cambridge in applied mathematics and theoretical physics and high-energy physics.

He said he’s aiming for a career in industry — perhaps in software development, where he can apply not only his physics and supercomputing expertise, but also his more recent interest in machine learning and artificial intelligence.

“There are a lot of parallels between how you interpret data in physics to what you do in a wider context,” Woss said. “For example, looking for patterns — there’s a lot of overlap. In the last decade, there has been a big revolution in how industry and scientists are using data to really look at all sorts of problems in slightly different ways.”

Woss grew up in Worksop, a town in Nottinghamshire in central England surrounded by woodlands and mining villages. His mother is a special education teacher and his father works in the coal industry. He credits both for his lifelong curiosity about how things work and his affinity for problem-solving.