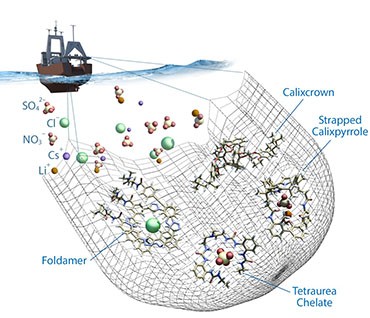 Nuclear energy accounts for some 19 percent of the U.S. electrical energy supply. The waste contains materials that are difficult to remove. Scientists developed four classes of molecules, called chelators, to selectively capture specific ions. These molecules use a combination of chemical bonding, attractions between opposite charges, and/or wrapping the ions in complementary binding pockets.

Nuclear fuel recycling is vital for sustainable nuclear energy. Strategically designed ion chelators will greatly benefit the safe production of energy from nuclear sources. Also, chelators will help in guaranteeing safe stocks of key materials. Radioactive waste is rich in ions. The chelators generated in this research will be used to selectively separate specific ions upon demand, allowing more efficient processing and safe disposal of the waste. The core technology may also find application in the purification of water. Further, it may aid in collecting other key elements, such as lithium, that are key to sustained energy independence.

The various classes of chelators discovered and developed in the course of this fundamental research serve as tools that act, on the molecular scale, to capture and selectively separate specific ions from concentrated mixtures of other ions. The use of chelator molecules to separate these ions acts on top of traditional physical separation methods. Chief among the advances in this area is the development of a cesium extraction technology that will revolutionize its separation when it is used in 2018 for legacy waste cleanup at the Savannah River Site. By removing cesium selectively from salt waste refinement processes for nuclear waste will become much more efficient. Other fundamental discoveries could hold the keys to more selective extraction of salts. For example, in mixed aqueous solutions chelates containing several urea groups can wrap around sulfate, an ion that is extremely detrimental to the reprocessing and storage of nuclear waste. Additionally, new chelates designed with two different binding sites can be used for binding both anions and metal ions. One very recent embodiment of this idea is the development of ion pair receptors that allow for the selective extraction of lithium salts. Lithium is the crucial component of many new technologies, ranging from batteries to industrial lubricants to depression medication. Another key discovery is the creation of chelators that can fold up around ions, called foldamers. Using an approach inspired by nature’s proteins, these foldamers can collect ions in one location and release them in another location using sunlight as a trigger.

S. Lee, Y. Hua, and A.H. Flood, “b Sheet-like hydrogen bonds interlock the helical turns of a photoswitchable foldamer to enhance the binding and release of chloride