Molecular movements triggered by light redirect the flow of energy through photosynthetic cells to protect them from sun damage. 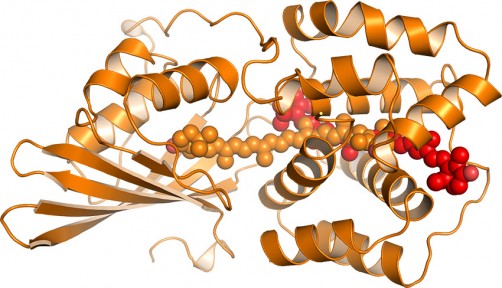 The orange carotenoid protein of cyanobacteria binds a single carotenoid pigment molecule that may dissipate excess light energy when it moves within the protein.

Too much sunlight can harm the ability of plants to turn the sun’s energy into fuels; nature has solved the problem by dissipating the unwanted energy as heat. With an eye to learning from nature’s success, scientists characterized the orange-colored protein that protects cyanobacteria from overexposure to sunlight. They found that the orange-ish protein shifts to a reddish color that helps dissipate excess energy harmlessly as heat.

The findings could be useful for design of artificial photosynthetic systems, which use intermittent sunlight to create use-any-time fuels.

The development of artificial photosynthetic systems for making chemical fuels from solar energy is a long-term research objective that spans many scientific and technical challenges. One key question is the ability of the photosynthetic system to protect itself from photodamage. Natural sunlight is damaging to the photosynthetic systems of plants, algae, and cyanobacteria, and is expected to be similarly harmful to highly efficient artificial systems. Nature has developed a mechanism for photoprotection that involves removing excess energy from the system harmlessly as heat; however, no such process currently exists for artificial systems. In an effort to understand mechanisms of natural photoprotection, researchers at Lawrence Berkeley National Laboratory and Michigan State University have characterized the orange carotenoid protein (OCP) that provides photoprotection in cyanobacteria. Upon exposure to sunlight, the OCP is photoactivated and converts from an “orange, light-absorbing” state to a “red, photoprotection” state that binds to the cyanobacterial antenna to dissipate heat. Using x-ray crystallography and x-ray footprinting, this work has shown that conversion from the orange to red state is induced by a 12 Å shift of a carotenoid pigment within the OCP. The pigment shift creates different carotenoid-protein interactions that cause the protein to change shape, while also providing the ability for the newly formed “red” state protein to bind to the cyanobacterial antenna and dissipate heat. Similar carotenoid motions may occur in plants and algae, which also rely on carotenoid pigments bound to proteins for photoprotection.