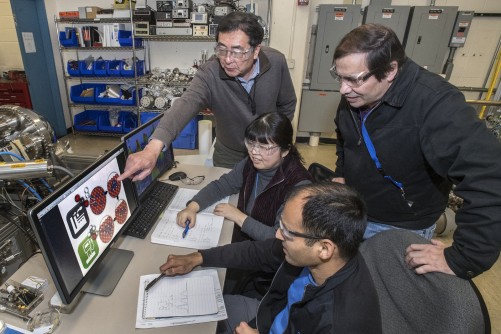 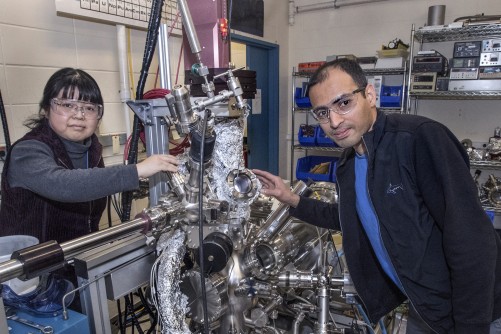 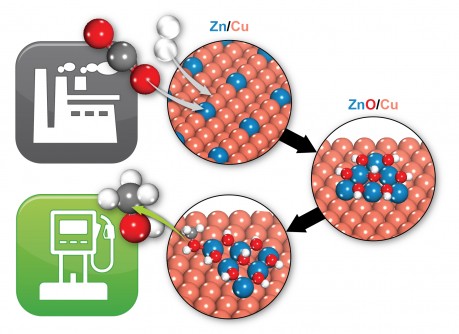 Brookhaven scientists identified how a zinc/copper (Zn/Cu) catalyst transforms carbon dioxide (two red and one grey balls) and hydrogen (two white balls) to methanol (one grey, one red, and four white balls), a potential fuel. Under reaction conditions, Zn/Cu transforms to ZnO/Cu, where the interface between the ZnO and Cu provides the active sites that allow the formation of methanol. 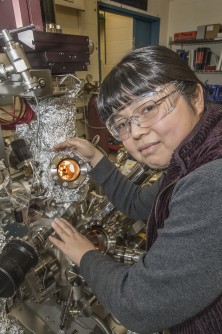 Newswise — UPTON, NY-Capturing carbon dioxide (CO2) and converting it to useful chemicals such as methanol could reduce both pollution and our dependence on petroleum products. So scientists are intensely interested in the catalysts that facilitate such chemical conversions. Like molecular dealmakers, catalysts bring the reacting chemicals together in a way that makes it easier for them to break and rearrange their chemical bonds. Understanding details of these molecular interactions could point to strategies to improve the catalysts for more energy-efficient reactions.

With that goal in mind, chemists from the U.S. Department of Energy's Brookhaven National Laboratory and their collaborators just released results from experiments and computational modeling studies that definitively identify the "active site" of a catalyst commonly used for making methanol from CO2. The results, published in the journal Science, resolve a longstanding debate about exactly which catalytic components take part in the chemical reactions-and should be the focus of efforts to boost performance.

"This catalyst-made of copper, zinc oxide, and aluminum oxide-is used in industry, but it's not very efficient or selective," said Brookhaven chemist Ping Liu, the study's lead author, who also holds an adjunct position at nearby Stony Brook University (SBU). "We want to improve it, and get it to operate at lower temperatures and lower pressures, which would save energy," she said.

But prior to this study, different groups of scientists had proposed two different active sites for the catalyst-a portion of the system with just copper and zinc atoms, or a portion with copper zinc oxide.

"We wanted to know which part of the molecular structure binds and breaks and makes bonds to convert reactants to product-and how it does that," said co-author Jose Rodriguez, another Brookhaven chemist associated with SBU.

To find out, Rodriguez performed a series of laboratory experiments using well-defined model catalysts, including one made of zinc nanoparticles supported on a copper surface, and another with zinc oxide nanoparticles on copper. To tell the two apart, he used an energetic x-ray beam to zap the samples, and measured the properties of electrons emitted. These electronic "signatures" contain information about the oxidation state of the atoms the electrons came from-whether zinc or zinc oxide.

Meanwhile Liu, Jingguang Chen of Brookhaven Lab and Columbia University, and Shyam Kattel, the first author of the paper and a postdoctoral fellow co-advised by Liu and Chen, used computational resources at Brookhaven's Center for Functional Nanomaterials [https://www.bnl.gov/cfn/] (CFN) and the National Energy Research Scientific Computing Center (NERSC)-two DOE Office of Science User Facilities-to model how these two types of catalysts would engage in the CO2-to-methanol transformations. These theoretical studies use calculations that take into account the basic principles of breaking and making chemical bonds, including the energy required, the electronic states of the atoms, and the reaction conditions, allowing scientists to derive the reaction rates and determine which catalyst will give the best rate of conversion.

Those predictions matched what Rodriguez observed in the laboratory. "We found that all the sites participating in these reactions were copper zinc oxide," he said.

But don't forget the copper.

Optimizing the copper/zinc oxide interface will become the driving principal for designing a new catalyst, the scientists say.

"This work clearly demonstrates the synergy from combining theoretical and experimental efforts for studying catalytic systems of industrial importance," said Chen. "We will continue to utilize the same combined approaches in future studies."

For example, said Rodriguez, "We'll try different configurations of the atoms at the copper/zinc oxide interface to see how that affects the reaction rate. Also, we'll be going from studying the model system to systems that would be more practical for use by industry."

An essential tool for this next step will be Brookhaven's National Synchrotron Light Source II [https://www.bnl.gov/ps/nsls2/about-NSLS-II.php] (NSLS-II), another Office of Science User Facility. NSLS-II produces extremely bright beams of x-rays-about 10,000 times brighter than the broad-beam laboratory x-ray source used in this study. Those intense x-ray beams will allow the scientists to take high-resolution snapshots that reveal both structural and chemical information about the catalyst, the reactants, and the chemical intermediates that form as the reaction occurs.

"And we'll continue to expand the theory," said Liu. "The theory points to the mechanistic details. We want to modify interactions at the copper/zinc oxide interface to see how that affects the activity and efficiency of the catalyst, and we'll need the theory to move forward with that as well."

An additional co-author, Pedro Ramírez of Universidad Central de Venezuela, made important contributions to this study by helping to test the activity of the copper zinc and copper zinc oxide catalysts.

Scientific paper: "Active Sites for CO2 Hydrogenation to Methanol on Cu/ZnO Catalysts" A copy of the paper can be found online at the Science press package webpage at http://www.eurekalert.org/jrnls/sci. You will need a EurekAlert user ID and password to access this information.

An electronic version of this news release with related graphics is also available in the Brookhaven Lab online newsroom: http://www.bnl.gov/newsroom/news.php?a=112105 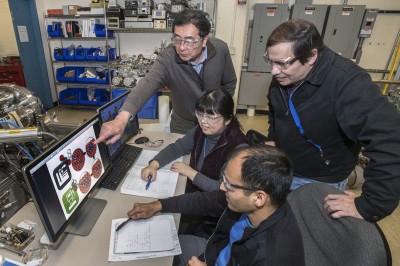 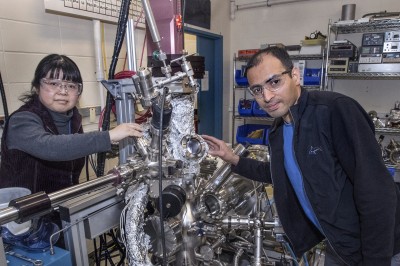 Caption: Ping Liu and Shyam Kattel with the x-ray source used in this study 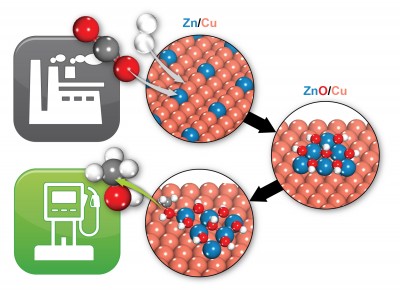 Caption: Brookhaven scientists identified how a zinc/copper (Zn/Cu) catalyst transforms carbon dioxide (two red and one grey balls) and hydrogen (two white balls) to methanol (one grey, one red, and four white balls), a potential fuel. Under reaction conditions, Zn/Cu transforms to ZnO/Cu, where the interface between the ZnO and Cu provides the active sites that allow the formation of methanol. 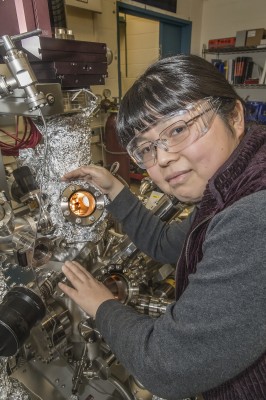