Using a combination of "smart housing," real-time energy feedback (email, wall screens, and internet "dashboards"), and resource use education and instruction, Clarkson University is implementing a system to help students reduce their energy and resource consumption. 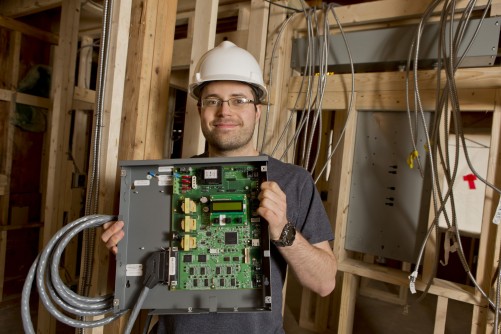 Clarkson University Ph.D. student Patrick F. Wilbur displays some of the electronics being used to collect data in Clarkson University housing. Clarkson’s Smart Housing Project is the first of its kind in the nation to take an interdisciplinary look at how technology can change behavior around the daily use of water and power.

What makes people use less energy? For many, it’s the cost: economic, environmental or both. Costs are only made clear, though, in a monthly utility bill. And that’s something millions of Americans never see.

These are people who live in various types of housing where power is part of the rent. This group includes more than half a million New York state inhabitants that live in college residence halls. Across the U.S., student housing accommodates 13 million people for about nine months a year.

“That’s a lot of people who have access to a thermostat but never get a heating bill,” says Clarkson University Political Science Professor Stephen Bird. His work in energy policy includes in-depth research on the “split incentive” problem.

“Essentially,” he says, “it’s any situation where the benefits people receive aren’t in line with the amount of money they pay. But in this case, the students are drawing large amounts of energy which, in turn, loads the power grid and consumes natural resources expensively and inefficiently.”

The fix may be remarkably simple -- and not too expensive, either.

“If we can show students how much energy they use,” Bird says, “if they see the impact of turning up the heat in winter or spending 15 minutes in the shower instead of five, we expect their behavior will change, dramatically.”

So, how can students see energy use? With a dashboard -- a digital readout -- showing the amount of electricity and water flowing into their living space. As some Clarkson University student apartments went through extensive renovations last summer, faculty and students installed sensors and other data collecting elements.

“There’s an enormous potential here to help people make more sustainable choices,” says Clarkson University Civil & Environmental Engineering Professor Kerop Janoyan, who is working with Bird on the project. “Because once you quantify energy usage, you start looking at renewable sources of energy.”

The project has garnered interest and support from the New York State Energy Research and Development Authority.

See a video about the Clarkson University smart housing research at http://youtu.be/AkHb0PVFCTE .

Clarkson University launches leaders into the global economy. One in five alumni already leads as a CEO, VP or equivalent senior executive of a company. Located just outside the Adirondack Park in Potsdam, N.Y., Clarkson University is a nationally recognized research university for undergraduates with select graduate programs in signature areas of academic excellence directed toward the world’s pressing issues. Through 50 rigorous programs of study in engineering, business, arts, sciences and health sciences, the entire learning-living community spans boundaries across disciplines, nations and cultures to build powers of observation, challenge the status quo, and connect discovery and engineering innovation with enterprise.