Common constituents prevent uranium from precipitating from liquids, letting it travel with groundwater. 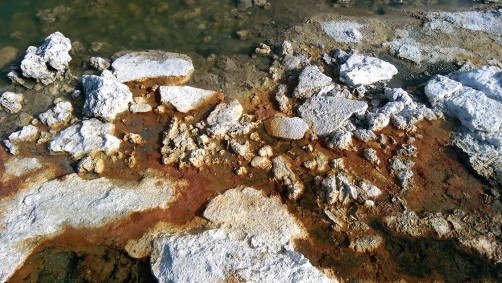 Transformations that affect the environmental mobility of metal or radionuclide contaminants typically occur in the presence of mineral or biological surfaces.

Newswise — Clay minerals are ubiquitous natural components of sediments and soils. Also, clays are used in the engineered barriers of spent nuclear fuel storage facilities. Scientists examined the molecular form of uranium(IV) in the presence of montmorillonite clays. The team found that the clays could inhibit the predicted precipitation of the mineral uraninite.

The effect of clays on uranium is not part of computational models of uranium transport in the environment. That’s a problem when studying how uranium will spread from a mine or storage site. Using state-of-the-art spectroscopy techniques, scientists provided a molecular-level view of uranium. The information is vital to accurately predict uranium’s travels through the subsurface.

Uranium mobility in the subsurface depends strongly on its oxidation state, with uranium(IV) being significantly less soluble than uranium(VI). However, solubility also depends on the contaminant’s molecular form, which can be affected by adsorption onto the surface of minerals, bacterial membranes and other constituents in the environment it is traveling through. Researchers examined the ability of montmorillonite clay minerals to adsorb uranium(IV) resulting from the reduction of uranium(VI) and compared it to that of iron and titanium oxide surfaces. The team tracked the valence and molecular structure of the uranium using synchrotron x-ray absorption spectroscopy. The team’s findings showed that at low clay surface:uranium ratios, the reduction of uranium(VI) in the presence of SYn-1 montmorillonite leads to the formation of the mineral uraninite (UO2). However, at high clay surface:uranium ratios (more typical of environmental conditions), a significant fraction of the resulting uranium(IV) is present as adsorbed uranium(IV) ions (up to 50 percent of total uranium). The threshold uranium(IV) surface coverage above which uraninite formation begins was determined to be significantly lower for montmorillonite than for iron or titanium oxides, suggesting that metal oxides may play a more important role than clay minerals in stabilizing the non-uraninite species observed in natural sediments.

This research is part of the Subsurface Biogeochemical Research Scientific Focus Area (SFA) at Argonne National Laboratory (ANL). The SFA is supported by the U.S. Department of Energy (DOE), Office of Science, Office of Biological and Environmental Research. Use of the Electron Microscopy Center at ANL and the Advanced Photon Source is supported by DOE’s Office of Science, Office of Basic Energy Sciences. MRCAT/EnviroCAT operations are supported by DOE and the MRCAT/EnviroCAT member institutions. All work at ANL was under contract DE-AC02-06CH11357.