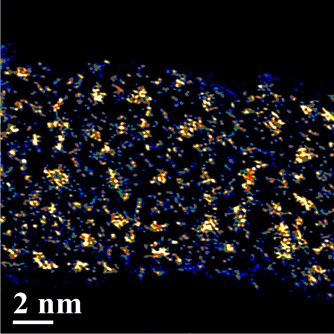 Newswise — RICHLAND, Wash. – Hybrid batteries that charge faster than conventional ones could have significantly better electrical capacity and long-term stability when prepared with a gentle-sounding way of making electrodes.

Called ion soft-landing, the high-precision technique resulted in electrodes that could store a third more energy and had twice the lifespan compared to those prepared by a conventional method, the researchers report today in Nature Communications. Straightforward to set up, the method could eventually lead to cheaper, more powerful, longer-lasting rechargeable batteries.

"This is the first time anyone has been able to put together a functioning battery using ion soft-landing," said chemist and Laboratory Fellow Julia Laskin of the Department of Energy's Pacific Northwest National Laboratory.

The advantages come from soft-landing's ability to build an electrode surface very specifically with only the most desirable molecules out of a complex mixture of raw components.

A different kind of hybrid

Although lithium ion rechargeable batteries are the go-to technology for small electronic devices, they release their energy slowly, which is why hybrid electric vehicles use gasoline for accelerating, and take a long time to recharge, which makes electric vehicles slower to "fill" than their gas-powered cousins.

One possible solution is a hybrid battery that crosses a lithium battery's ability to hold a lot of charge for its size with a fast-charging supercapacitor. PNNL chemists wanted to know if they could make superior hybrid battery materials with a technology — called ion soft-landing — that intricately controls the raw components during preparation.

To find out, Laskin and colleagues created hybrid electrodes by spraying a chemical known as POM, or polyoxometalate, onto supercapacitor electrodes made of microscopically small carbon tubes. Off-the-shelf POM has both positively and negatively charged parts called ions, but only the negative ions are needed in hybrid electrodes.

Limited by its design, the conventional preparation technique sprays both the positive and negative ions onto the carbon nanotubes. Ion soft-landing, however, separates the charged parts and only sets down the negative ions on the electrode surface. The question that Laskin and team had was, do positive ions interfere with the performance of hybrid electrodes?

To find out, the team made centimeter-sized square hybrid batteries out of POM-carbon nanotube electrodes that sandwiched a specially developed ionic liquid membrane between them.

"We had to design a membrane that separated the electrodes and also served as the battery's electrolyte, which allows conduction of ions," said Prabhakaran. "Most people know electrolytes as the liquid sloshing around within a car battery. Ours was a solid gel."

They tested this mini-hybrid battery for how much energy it could hold and how many cycles of charging and discharging it could handle before petering out.

They compared soft-landing with conventionally made hybrid batteries, which were made with a technique called electrospray deposition. They used an off-the-shelf POM containing positively charged sodium ions.

Cheers for the POMs

The team found that the POM hybrid electrodes made with soft-landing had superior energy storage capacity. They could hold a third more energy than the carbon nanotube supercapacitors by themselves, which were included as a minimum performance benchmark. And soft-landing hybrids held about 27 percent more energy than conventionally made electrospray deposited electrodes.

The conventionally-made devices used more POM, but the team couldn't count them out yet. They might in fact have a longer lifespan than the soft-landing produced electrodes. To test that, the team charged and discharged the hybrids 1,000 times and measured how long they lasted.

As they did in the previous tests, the soft-landing-based devices performed the best, losing only a few percent capacity after 1000 cycles. The naked supercapacitors came in second, and the sodium-based, conventionally made devices lost about double the capacity of the soft-landed devices. This suggests that the soft-landing method has the potential to double the lifespan of these types of hybrid batteries.

"The fact that the capacitance reaches a maximum with so little POM, and then drops off with more, is remarkable," said Laskin. "We didn't expect such a small amount of POM to be making such a large contribution to the capacitance."

They decided to examine the structure of the electrodes using powerful microscopes in EMSL, the Environmental Molecular Sciences Laboratory, a DOE Office of Science User Facility at PNNL. They compared soft-landing with the conventionally made, sodium-POM electrodes.

Soft-landing created small discrete clusters of POM dotting the carbon nanotubes, but the conventional method resulted in larger clumps of POM clusters swamping out the nanotubes, aggregates up to ten times the size of those made by soft-landing.This result suggested to the researchers that removing the positive ions from the POM starting material allowed the negative ions to disperse evenly over the surface. As long as the positive ions such as sodium remained, the POM and sodium appear to reform the crystalline material and aggregate on the surface. This prevented much of the POM from doing its job in the battery, thereby reducing capacity.

When the team zoomed out a little and viewed the nanotubes from above, the conventionally made electrodes were covered in large aggregates of POM. The soft-landed electrodes, however, were remarkably indistinguishable from the naked carbon nanotube supercapacitors.In future research, the team wants to explore how to get the carbon materials to accept more POM, which might increase capacity and lifespan even further.

The Joint Center for Energy Storage Research (JCESR), a DOE Energy Innovation Hub, is a major partnership that integrates researchers from many disciplines to overcome critical scientific and technical barriers and create new breakthrough energy storage technology. Led by the U.S. Department of Energy's Argonne National Laboratory, partners include national leaders in science and engineering from academia, the private sector, and national laboratories. Their combined expertise spans the full range of the technology-development pipeline from basic research to prototype development to product engineering to market delivery.