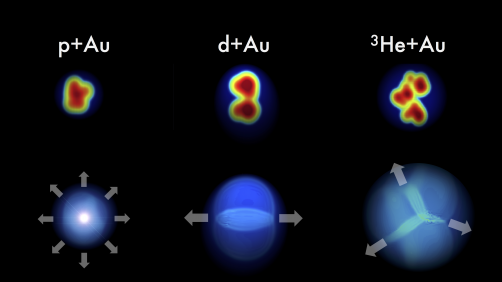 If collisions between small projectiles—protons (p), deuterons (d), and helium-3 nuclei (3He)—and gold nuclei (Au) create tiny hot spots of quark-gluon plasma, the pattern of particles picked up by the detector should retain some "memory" of each projectile's initial shape. Measurements from the PHENIX experiment match these predictions with very strong correlations between the initial geometry and the final flow patterns. 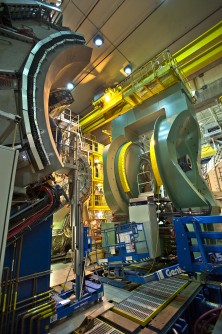 Scientists are studying this hot soup made up of quarks and gluons—the building blocks of protons and neutrons—to learn about the fundamental force that holds these particles together in the visible matter that makes up our world today. The ability to create such tiny specks of the primordial soup (known as quark-gluon plasma) was initially unexpected and could offer insight into the essential properties of this remarkable form of matter.

"This work is the culmination of a series of experiments designed to engineer the shape of the quark-gluon plasma droplets," said PHENIX collaborator Jamie Nagle of the University of Colorado, Boulder, who helped devise the experimental plan as well as the theoretical simulations the team would use to test their results.

The PHENIX collaboration's latest paper includes a comprehensive analysis of collisions between small projectiles (single protons, two-particle deuterons, and three-particle helium-3 nuclei) with large gold nuclei "targets" moving in the opposite direction at nearly the speed of light. The team tracked particles emerging from these collisions, looking for evidence that their flow patterns matched up with the original geometries of the projectiles, as would be expected if the tiny projectiles were indeed creating a perfect liquid quark-gluon plasma.

"RHIC is the only accelerator in the world where we can perform such a tightly controlled experiment, colliding particles made of one, two, and three components with the same larger nucleus, gold, all at the same energy," said Nagle.

The "perfect" liquid is now a well-established phenomenon in collisions between two gold nuclei at RHIC, where the intense energy of hundreds of colliding protons and neutrons melts the boundaries of these individual particles and allows their constituent quarks and gluons to mingle and interact freely. Measurements at RHIC show that this soup of quarks and gluons flows like a liquid with extremely low viscosity (aka, near-perfection according to the theory of hydrodynamics). The lack of viscosity allows pressure gradients established early in the collision to persist and influence how particles emerging from the collision strike the detector.

"If such low viscosity conditions and pressure gradients are created in collisions between small projectiles and gold nuclei, the pattern of particles picked up by the detector should retain some 'memory' of each projectile's initial shape—spherical in the case of protons, elliptical for deuterons, and triangular for helium-3 nuclei," said PHENIX spokesperson Yasuyuki Akiba, a physicist with the RIKEN laboratory in Japan and the RIKEN/Brookhaven Lab Research Center.

PHENIX analyzed measurements of two different types of particle flow (elliptical and triangular) from all three collision systems and compared them with predictions for what should be expected based on the initial geometry.

"The latest data—the triangular flow measurements for proton-gold and deuteron-gold collisions newly presented in this paper—complete the picture," said Julia Velkovska, a deputy spokesperson for PHENIX, who led a team involved in the analysis at Vanderbilt University. "This is a unique combination of observables that allows for decisive model discrimination."

"In all six cases, the measurements match the predictions based on the initial geometric shape. We are seeing very strong correlations between initial geometry and final flow patterns, and the best way to explain that is that quark-gluon plasma was created in these small collision systems. This is very compelling evidence," Velkovska said.

The geometric flow patterns are naturally described in the theory of hydrodynamics, when a near-perfect liquid is created. The series of experiments where the geometry of the droplets is controlled by the choice of the projectile was designed to test the hydrodynamics hypothesis and to contrast it with other theoretical models that produce particle correlations that are not related to initial geometry. One such theory emphasizes quantum mechanical interactions—particularly among the abundance of gluons postulated to dominate the internal structure of the accelerated nuclei—as playing a major role in the patterns observed in small-scale collision systems.

The PHENIX team compared their measured results with two theories based on hydrodynamics that accurately describe the quark-gluon plasma observed in RHIC's gold-gold collisions, as well as those predicted by the quantum-mechanics-based theory. The PHENIX collaboration found that their data fit best with the quark-gluon plasma descriptions—and don't match up, particularly for two of the six flow patterns, with the predictions based on the quantum-mechanical gluon interactions.

The paper also includes a comparison between collisions of gold ions with protons and deuterons that were specifically selected to match the number of particles produced in the collisions. According to the theoretical prediction based on gluon interactions, the particle flow patterns should be identical regardless of the initial geometry.

"With everything else being equal, we still see greater elliptic flow for deuteron-gold than for proton-gold, which matches more closely with the theory for hydrodynamic flow and shows that the measurements do depend on the initial geometry," Velkovska said. "This doesn't mean that the gluon interactions do not exist," she continued. "That theory is based on solid phenomena in physics that should be there. But based on what we are seeing and our statistical analysis of the agreement between the theory and the data, those interactions are not the dominant source of the final flow patterns."

PHENIX is analyzing additional data to determine the temperature reached in the small-scale collisions. If hot enough, those measurements would be further supporting evidence for the formation of quark-gluon plasma.

The interplay with theory, including competitive explanations, will continue to play out. Berndt Mueller, Brookhaven Lab's Associate Director for Nuclear and Particle Physics, has called on experimental physicists and theorists to gather to discuss the details at a special workshop to be held in early 2019. "This back-and-forth process of comparison between measurements, predictions, and explanations is an essential step on the path to new discoveries—as the RHIC program has demonstrated throughout its successful 18 years of operation," he said.

This work was supported by the DOE Office of Science, and by all the agencies and organizations supporting research at PHENIX [https://www.bnl.gov/rhic/funding.asp].

Brookhaven National Laboratory is supported by the Office of Science of the U.S. Department of Energy. The Office of Science is the single largest supporter of basic research in the physical sciences in the United States, and is working to address some of the most pressing challenges of our time. For more information, please visit science.energy.gov [https://science.energy.gov/].

Scientific paper: "Creation of quark-gluon plasma droplets with three distinct geometries" [http://dx.doi.org/10.1038/s41567-018-0360-0] NOTE: This link will not become active until the paper publishes.

An electronic version of this news release with related graphics [https://www.bnl.gov/newsroom/news.php?a=113171] NOTE: This link will not become active until the paper publishes.

Tiny Drops of Hot Quark Soup—How Small Can They Be? [https://www.bnl.gov/newsroom/news.php?a=24469] 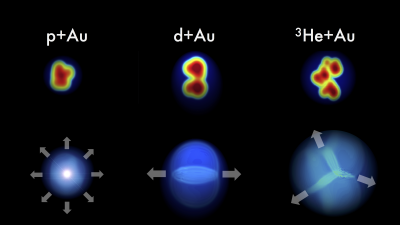 Caption: If collisions between small projectiles—protons (p), deuterons (d), and helium-3 nuclei (3He)—and gold nuclei (Au) create tiny hot spots of quark-gluon plasma, the pattern of particles picked up by the detector should retain some "memory" of each projectile's initial shape. Measurements from the PHENIX experiment match these predictions with very strong correlations between the initial geometry and the final flow patterns. 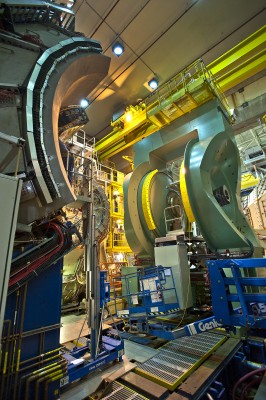