Cooling Fusion Plasmas from the Inside Out 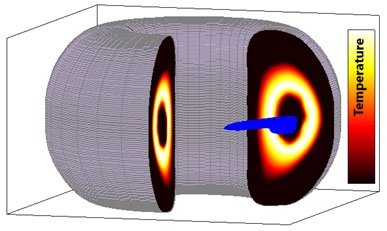 A computer simulation showing temperature contours of a hot fusion plasma being cooled from the inside (the dark region in the center) after the release of the shell pellet payload material (in blue) near the center.

Creating a 150-million-degree plasma where hydrogen atoms fuse and release energy is a difficult undertaking. Cooling that plasma in an orderly and controllable fashion is also difficult. Researchers at the DIII-D National Fusion Facility are studying a new method that uses boron-filled diamond shells to quickly cool fusion plasmas. Early experimental results and computer modeling indicate this method could avoid problems with traditional cooling approaches. In computer simulations, the new approach also shows promise for addressing a longstanding challenge for fusion tokamaks. That challenge is the damaging bursts of electrons that can occur when fusion plasmas are quickly cooled.

Future fusion reactors will have very high power densities and will need to operate for long periods. Given these characteristics, reactor operators will need the ability to cool a fusion plasma—known as quenching—in an orderly fashion that does not damage the tokamak and that allows the reactor to restart quickly. For more than a year, researchers have been studying a technique of injecting diamond shells into the heart of a plasma at hundreds of miles per hour. As it is injected, the diamond burns away and releases a payload of boron. This boron then cools the plasma. Recent complex computer modeling has increased researchers’ understanding of how this technique works and identified unexpected benefits. These benefits may make the new technique particularly appealing for future fusion reactors.

Quenching is traditionally done by injecting a large quantity of a gas or a cryogenically frozen solid into the edge of the plasma, cooling the plasma from the outside in. As this material moves through nested layers in the plasma—known as flux surfaces—it destroys them like peeling away layers of an onion. This action consequently releases the heat confined in each layer outward. The new diamond shell approach reverses the process by cooling the inner layers first, so that the released heat is still trapped by the outer layers as it is converted to light. The diamond shell ablates slowly as it passes through the edge of the plasma and then breaks open in the center to release the larger quantity of boron, initiating the quench internally.

New simulations show that both the total amount of ablated carbon from the diamond shell and the location at which the shell breaks open determine whether the outer flux surfaces survive while the center of the plasma cools. Under the right conditions, the outer edge of the torus continues to confine heat until nearly all the heat in the center is converted, thereby protecting the outer walls. The simulations also show this type of quench has the unexpected benefit of preventing electrons from being accelerated to nearly light speed. These particles, known as runaway electrons, can strike the inside of the tokamak, damaging the walls and sensitive equipment.

This work is supported by the Department of Energy Office of Science Fusion Energy Sciences program.