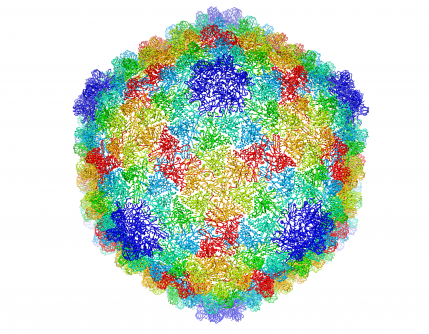 C. Hryc and the Chiu Lab, Baylor College of Medicine

Complete capsid of bacteriophage P22 generated with validated atomic models that were derived from a high-resolution cryo-electron microscopy density map.

Over 20,000 two-dimensional cryo-EM images of bacteriophage P22 (also known as the P22 virus that infects the common bacterium Salmonella) from Baylor College of Medicine were used to make the model. The results were published by researchers from Baylor College of Medicine, Massachusetts Institute of Technology, Purdue University and Berkeley Lab in the Proceedings of the National Academies of Sciences earlier in March.

“This is a great example of how to exploit electron microscopy technology and combine it with new computational methods to determine a bacteriophage’s structure,” said Paul Adams, Berkeley Lab’s Molecular Biophysics & Integrated Bioimaging division director and a co-author of the paper. “We developed the algorithms—the computational code—to optimize the atomic model so that it best fit the experimental data.”

The successful rendering of bacteriophage P22’s 3-D atomic-scale model allows researchers to peek inside the virus’ protein coats at resolution. It is the culmination of several years of work that previously had enabled Baylor College researchers to trace out most of the protein’s backbone, but not the fine details, according to Corey Hryc, co-first author and a graduate student of Baylor biochemistry professor Wah Chiu.

“Thanks to this exquisite structural detail, we have determined the protein chemistry of the P22 virus," Chiu said. "I think it is important that we provide detailed annotations with the structure so other researchers can use it for their future experiments," he added. Chiu’s lab has been using cryo-EM and computer reconstruction techniques to build 3-D molecular structures for almost 30 years. And the findings could have valuable biological implications as well.

Thanks to the 3-D atomic-scale model, it’s now “possible to see the interactions between the pieces making up the P22 virus, which are critical to making it stable,” Adams said. This helps researchers figure out how to make chemicals that can bind to certain proteins. Adams underscores that the ability to understand the configuration of atoms in molecular space can be used to generate new insights into drug design and development.