The CUORE experiment set the tightest limits yet on the rare decay of tellurium-130, providing insights into the nature of neutrinos. 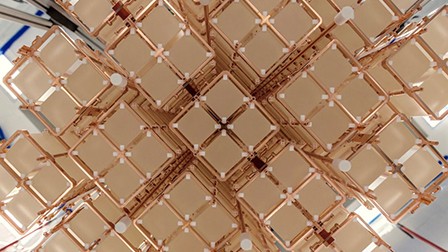 Bottom view of the 19 CUORE towers installed in the cryostat

The neutrino is one of the least understood particles. One of the biggest open questions is whether it is its own antiparticle. If it is, it would help explain why there is more matter in the universe than antimatter. Scientists working a joint Italian-U.S. experiment released new results on a search for an extremely rare event that can only occur if neutrinos are their own antiparticles. After two months of very detailed research, they didn’t observe the event.

The study has put the most stringent limits on the probability of a rare event—a neutrinoless double beta decay of tellurium-130 nuclei. This event can only occur if a neutrino can be its own antiparticle. The excellent quality of the data and the very rapid turn-around of its analysis shows that the experiment is working well. The measured backgrounds were in line with expectations, showing that all of the work to minimize residual backgrounds has paid off. The collaboration is on track to collect additional data and reach their expected energy resolution to set limits that are even more stringent on the probability of this type of decay. In addition, it will provide a more accurate estimate of the mass of the neutrino.

Many questions about the fundamental nature of neutrinos remain open, including whether or not a neutrino is its own antiparticle. If so, scientists would have new insights into why there is more matter than antimatter in the universe and why the mass of the neutrino is so small. The Cryogenic Underground Observatory for Rare Events (CUORE), a joint Italian and U.S. experiment housed in a deep underground laboratory beneath a mountain in Italy, has released new results on a search for a neutrinoless double beta decay, which can only occur if neutrinos are their own antiparticles. Scientist at CUORE searched for these kinds of decays by cooling nearly a ton of tellurium dioxide crystals down to below 273 degrees Celsius and watching for a minute change in temperature corresponding to the decay. After two months of observation, the team did not detect any neutrinoless double beta decays. Using only two months of data, the experiment has already put the most stringent limits to date on the probability of a tellurium-130 nuclei undergoing a neutrinoless double beta decay. If discovered, this decay would help us understand how we came to be made of matter instead of antimatter.