A new study is a step forward in understanding why perovskite materials work so well in energy devices and potentially leads the way toward a theorized â€śhotâ€ť technology that would significantly improve the efficiency of todayâ€™s solar cells. 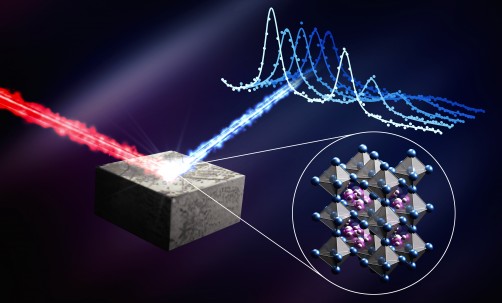 When the researchers scattered neutrons off the perovskite material (red beam) they were able to measure the energy the neutrons lost or gained (white and blue lines). Using this information, they were able to see the structure and motion of the atoms and molecules within the material (arrangement of blue and purple spheres).

Newswise — A closer look at materials that make up conventional solar cells reveals a nearly rigid arrangement of atoms with little movement. But in hybrid perovskites, a promising class of solar cell materials, the arrangements are more flexible and atoms dance wildly around, an effect that impacts the performance of the solar cells but has been difficult to measure.

In a paper published in the Proceedings of the National Academy of Sciences, an international team of researchers led by the U.S. Department of Energy’s SLAC National Accelerator Laboratory has developed a new understanding of those wild dances and how they affect the functioning of perovskite materials. The results could explain why perovskite solar cells are so efficient and aid the quest to design hot-carrier solar cells, a theorized technology that would almost double the efficiency limits of conventional solar cells by converting more sunlight into usable electrical energy.

Piece of the puzzle

Perovskite solar cells, which can be produced at room temperature, offer a less expensive and potentially better performing alternative to conventional solar cell materials like silicon, which have to be manufactured at extremely high temperatures to eliminate defects. But a lack of understanding about what makes perovskite materials so efficient at converting sunlight into electricity has been a major hurdle to producing even higher efficiency perovskite solar cells.

“It’s really only been over the last five or six years that people have developed this intense interest in solar perovskite materials,” says Mike Toney, a distinguished staff scientist at SLAC’s Stanford Synchrotron Radiation Light Source (SSRL) who led the study. “As a consequence, a lot of the foundational knowledge about what makes the materials work is missing. In this research, we provided an important piece of this puzzle by showing what sets them apart from more conventional solar cell materials. This provides us with scientific underpinnings that will allow us to start engineering these materials in a rational way.”

When sunlight hits a solar cell, some of the energy can be used to kick electrons in the material up to higher energy states. These higher-energy electrons are funneled out of the material, producing electricity.

But before this happens, a majority of the sun’s energy is lost to heat with some fraction also lost during the extraction of usable energy or due to inefficient light collection. In many conventional solar cells, such as those made with silicon, acoustic phonons – a sort of sound wave that propagates through material – are the primary way that this heat is carried through the material. The energy lost by the electron as heat limits the efficiency of the solar cell.

In this study, theorists from the United Kingdom, led by Imperial College Professor Aron Walsh and electronic structure theorists Jonathan Skelton and Jarvist Frost, provided a theoretical framework for interpreting the experimental results. They predicted that acoustic phonons traveling through perovskites would have short lifetimes as a result of the flexible arrangements of dancing atoms and molecules in the material.

Stanford chemists Hema Karunadasa and Ian Smith were able to grow the large, specialized single crystals that were essential for this work. With the help of Peter Gehring, a physicist at the NIST Center for Neutron Research, the team scattered neutrons off these perovskite single crystals in a way that allowed them to retrace the motion of the atoms and molecules within the material. This allowed them to precisely measure the lifetime of the acoustic phonons.

The research team found that in perovskites, acoustic phonons are incredibly short-lived, surviving for only 10 to 20 trillionths of a second. Without these phonons trucking heat through the material, the electrons might stay hot and hold onto their energy as they’re pulled out of the material. Harnessing this effect could potentially lead to hot-carrier solar cells with efficiencies that are nearly twice as high as conventional solar cells.

In addition, this phenomenon could explain how perovskite solar cells work so well despite the material being riddled with defects that would trap electrons and dampen performance in other materials.

“Since phonons in perovskites don’t travel very far, they end up heating the area surrounding the electrons, which might provide the boost the electrons need to escape the traps and continue on their merry way,” Toney says.

To follow up on this study, researchers at the Center for Hybrid Organic-Inorganic Semiconductors for Energy (CHOISE) Energy Frontier Research Center led by DOE’s National Renewable Energy Laboratory will investigate this phenomenon in more complicated perovskite materials that are shown to be more efficient in energy devices. They would like to figure out how changing the chemical make-up of the material affects acoustic phonon lifetimes.

“We need to fundamentally transform our energy system as quickly as possible,” says Aryeh Gold-Parker, who co-led the study as a PhD student at Stanford University and SLAC. “As we move toward a low-carbon future, a very important piece is having cheap and efficient solar cells. The hope in perovskites is that they'll lead to commercial solar panels that are more efficient and cheaper than the ones on the market today.”

The research team also included scientists from NIST; the University of Bath and Kings College London, both in the UK; and Yonsei University in Korea.

SSRL is a DOE Office of Science user facility. This work was supported by the DOE’s Office of Science and the Solar Energy Technologies Office; the Engineering and Physical Sciences Research Council; the Royal Society; and the Leverhulme Trust.

From Nashville to New Hampshire, PPPLâ€™s student interns do research, attend classes and socialize from their home computers